President Donald Trump vowed to close the southern border if necessary in response to the advancing caravan of illegal immigrants from Central America, in a Saturday evening Twitter declaration.

Migrants at the Southern Border will not be allowed into the United States until their claims are individually approved in court. We only will allow those who come into our Country legally. Other than that our very strong policy is Catch and Detain. No “Releasing” into the U.S…

….All will stay in Mexico. If for any reason it becomes necessary, we will CLOSE our Southern Border. There is no way that the United States will, after decades of abuse, put up with this costly and dangerous situation anymore!

The tweets mark the second time in recent days the president has vowed the drastic step as a potential action in response to illegal immigration.

“If we find that it’s uncontrollable, if we find it gets to a level where we are going to lose control or where people are going to start getting hurt, we will close entry into the country for a period of time until we can get it under control,” Trump said of potential action while speaking to reporters Thursday. 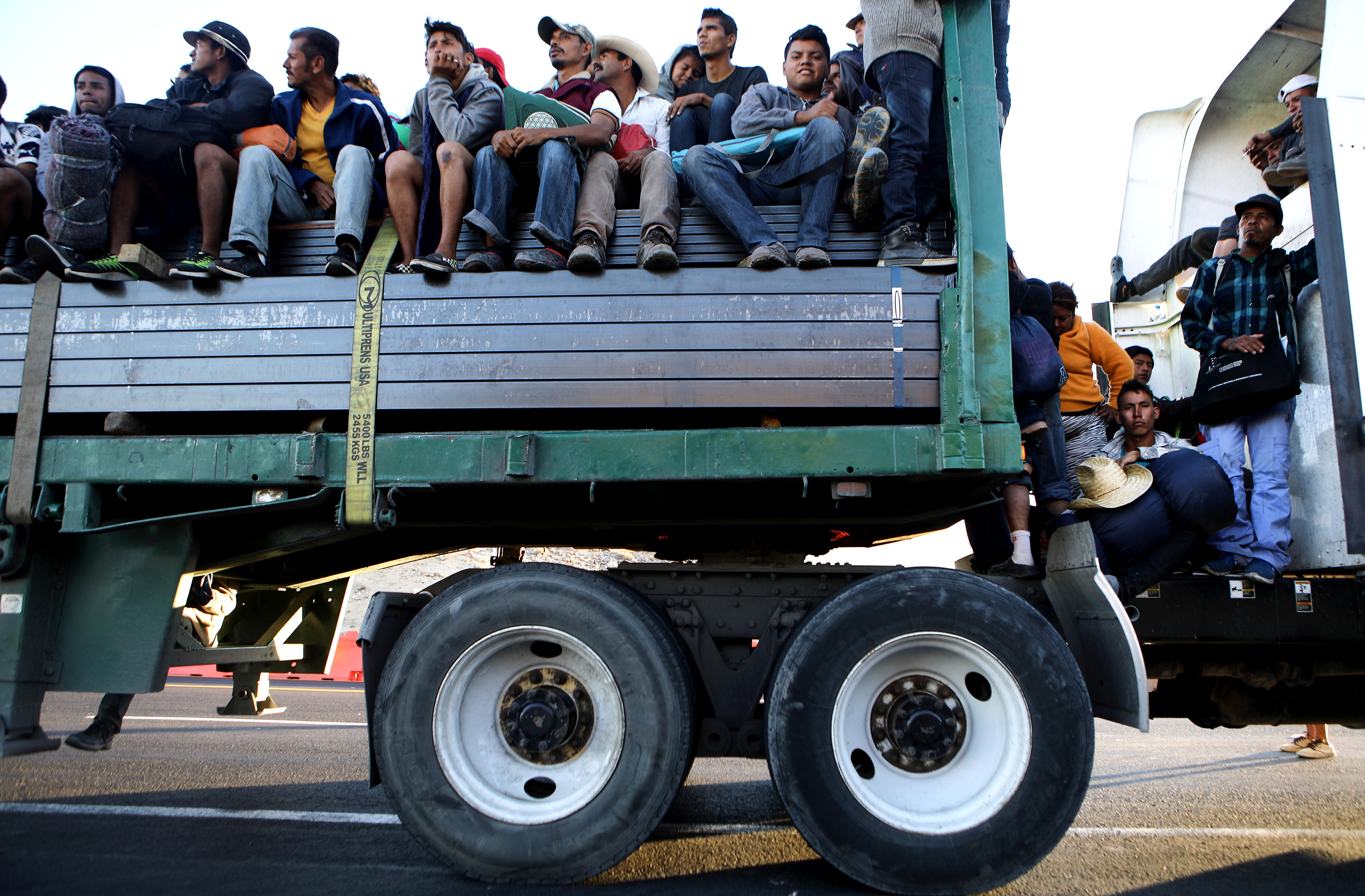 Migrants who are part of the ‘migrant caravan’ sit on a truck while on their way to Tijuana on November 20, 2018 near Mexicali, Mexico. Parts of the migrant caravan have been arriving to Tijuana after traveling for more than a month through Central America and Mexico to reach the U.S. border. A US federal judge has temporarily blocked President Trump’s order which attempted to deny migrants the possibility of asylum if they cross the border illegally. (Photo by Mario Tama/Getty Images)

The Trump administration already resorted to such an action in recent weeks when the Department of Homeland Security noted that it had to temporarily close the busiest port of entry between the U.S. and Mexico last week in order to reinforce barriers and harden the ports of entry.

Honduran migrants take part in a new caravan heading to the US with Honduran and Guatemalan national flags in Quezaltepeque, Chiquimula, Guatemala on October 22, 2018. – US President Donald Trump on Monday called the migrant caravan heading toward the US-Mexico border a national emergency, saying he has alerted the US border patrol and military. (Photo by ORLANDO ESTRADA / AFP)

DHS Secretary Kirstjen Nielsen noted in an announcement on Twitter at the time that the hardening was in direct response to threats from members of the migrant caravan who reportedly wanted to storm the port of entry en masse in order to overwhelm U.S. authorities and illegally seek refuge.

Trump also told reporters that U.S. troops are authorized to use lethal force at the southern border if they need to defend themselves, saying “if they have to they’re going to use lethal force, I’ve given the order, I hope they don’t have to.” (RELATED: Trump: Troops At Border Authorized ‘To Use Lethal Force’)

The president dispatched nearly 6,000 U.S. troops to the border in recent weeks to bolster border enforcement. Trump justified the deployment by pointing at the advancing caravan of thousands of Central American would-be migrants who want to claim asylum. The caravan used violent tactics to break through legal ports of entry in Mexico, prompting alarm amongst U.S. authorities.