U.S. Secretary of Homeland Security Kirstjen Nielsen issued a statement Sunday afternoon regarding the closure of the San Ysidro port of entry.

Nielsen’s statement condemns the “lawlessness” displayed on Sunday after migrants tried to storm the border. Nielsen promised to prosecute “to the fullest extent of the law anyone who destroys federal property, endangers our frontline operators, or violates our nation’s sovereignty.” 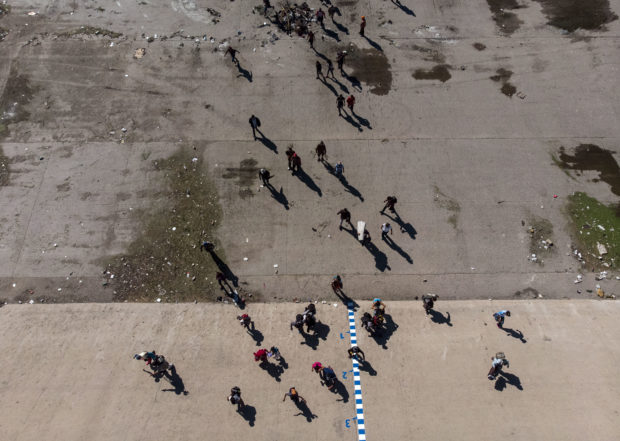 A group of Central American migrants -mostly from Honduras- cross the almost dry riverbed of the Tijuana River in an attempt to get to El Chaparral port of entry, in Tijuana, Baja California State, Mexico, near US-Mexico border on November 25, 2018. – Hundreds of migrants attempted to storm a border fence separating Mexico from the US on Sunday amid mounting fears they will be kept in Mexico while their applications for a asylum are processed. An AFP photographer said the migrants broke away from a peaceful march at a border bridge and tried to climb over a metal border barrier in the attempt to enter the United States. (GUILLERMO ARIAS/AFP/Getty Images)

The port, the United States’ largest, was closed to traffic and pedestrians after several hundred mostly male migrants tried to physically storm the area in an effort to illegally gain entry into the country. (RELATED: This Democratic Congressman Doesn’t Want Fox News To Cover The Migrant Caravan)

Nielsen’s statement revealed that several migrants not only tried to “breach” the fence, but also “sought to harm CBP personnel by throwing projectiles at them.”

This morning, CBP was forced to close the San Ysidro Port of Entry to ensure public safety in response to large numbers of migrants seeking to enter the U.S. illegally. After being prevented from entering the Port of Entry, some of these migrants attempted to breach legacy fence infrastructure along the border and sought to harm CBP personnel by throwing projectiles at them. As I have continually stated, DHS will not tolerate this type of lawlessness and will not hesitate to shut down ports of entry for security and public safety reasons. We will also seek to prosecute to the fullest extent of the law anyone who destroys federal property, endangers our frontline operators, or violates our nation’s sovereignty. CBP, along with other DHS law enforcement, federal law enforcement, the U.S. military and state and local law enforcement, will continue to have a robust presence along the Southwest Border and at our ports of entry to prevent illegal entry or violence. We continue to stay in close contact with Mexican authorities and we remain committed to resolving this situation safely in concert with our Mexican partners.

Just last month, a migrant caravan tried a similar tactic with greater success as they stormed into Mexico from Central America.