The Catholic Church’s worldwide organization of nuns called on nuns who have been sexually abused to report their abuse to law enforcement and church officials.

The International Union of Superiors General (IUSG) encouraged nuns Friday to report abuse, condemning the church’s culture of silence and secrecy, and vowing to help nuns who have been abused to find justice and healing. The IUSG, which represents 500,000 nuns across the world, made the statement two days before the U.N.’s International Day for the Elimination of Violence Against Women. (RELATED: Diocese Won’t Defend Indian Bishop Accused Of Raping Nun, May Pay For Nun’s Attorney)

“We condemn those who support the culture of silence and secrecy, often under the guise of ‘protection’ of an institution’s reputation or naming it ‘part of one’s culture,'” the statement reads.

“We advocate for transparent civil and criminal reporting of abuse whether within religious congregations, at the parish or diocesan levels, or in any public arena,” it adds.

Vatican officials have known about the problem of male clergy and others sexually preying on nuns but have yet to fully acknowledge it or take action to address it, according to The Associated Press. Cases of clerical sex abuse against nuns have reportedly occurred in Africa, Asia, Europe, and South America. A series of studies commissioned in the 1990s reportedly revealed that priests in Africa targeted nuns in particular to avoid HIV transmission from prostitutes. 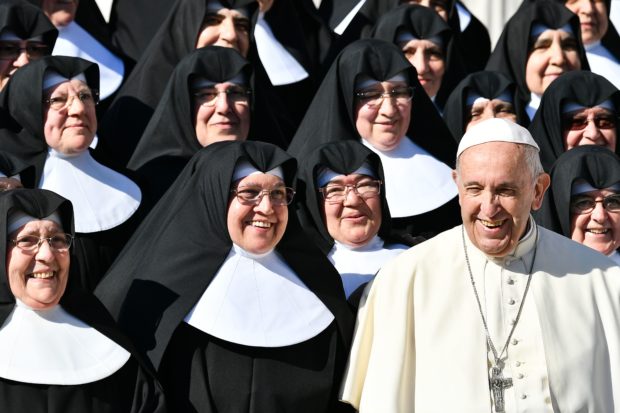 Pope Francis poses with a group of nuns at the end of the weekly general audience on October 24, 2018 at St. Peter’s square in the Vatican. ( VINCENZO PINTO/AFP/Getty Images)

In one recent case in India, a nun accused a bishop of repeatedly raping her. The bishop now faces trial without the financial aid of his diocese for his legal defense. The nun who made the accusations said that she sent several letters to Vatican officials to alert them about local priests’ maltreatment of nuns.

She said that like many other nuns who have suffered abuse she was reluctant to come forward due to the fear that she would not be believed and that church officials would smear her as sexually promiscuous. Her fears were merited to a degree, as the bishop she accused claimed that she had an incestuous affair.

Clerical abuse case experts say that nuns who report abuse are often defamed with such accusations or are punished for their reports by being expelled from their orders, according to AP.