A Democratic senator tweeted his outrage over the alleged use of “chemical weapons” against the migrants who stormed the U.S. border Sunday.

Hawaii Sen. Brian Schatz suggested Sunday that the reported deployment of tear gas may be in violation of an official convention on chemical weapons. But he deleted that tweet, according to Fox News, before retreating to a suggestion that those “uncomfortable” with the use of tear gas against “children” should join a “coalition of the moral and the sane.”

According to numerous reports Sunday, U.S. Customs and Border Protection agents used tear gas to repulse a group of about 500 migrants, many of whom were reportedly storming the border, and were concerned that President Donald Trump would seal the border.

There were also stories over the weekend of Mexico agreeing to a “Remain in Mexico” plan that would see the migrants stay in Mexico while U.S. officials assessed their refugee claims. On Sunday, Mexico repudiated the story. (RELATED: Alexandria Ocasia-Cortez Compares Migrant Caravan To Jews Fleeing Holocaust) 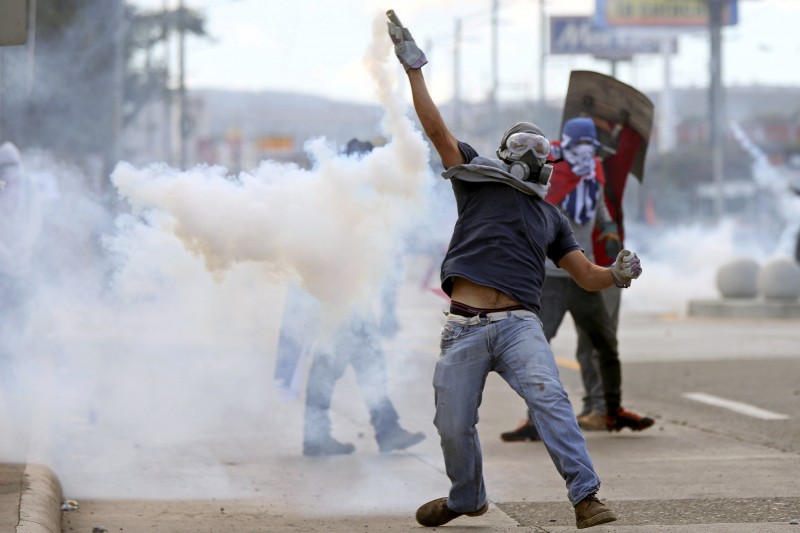 A demonstrator throws a tear gas canister during a protest as Honduran President Juan Orlando Hernandez is sworn in for a new term in Tegucigalpa, Honduras Jan. 27, 2018. REUTERS/Edgard Garrido

Schatz first responded to the reported use of tear gas by U.S. border guards by tweeting, “Tear gas across the border against unarmed families is a new low.” Schatz implied that something improper had occurred and asked “WHO GAVE THE ORDER?”

WHO GAVE THE ORDER?

In a tweet that was deleted and cited by Fox News, Schatz reportedly suggested the use of tear gas may have violated the chemical weapons ban that the U.S. upholds. “Why tear gas? Is this consistent with the Conventions on Chemical Weapons?”

Schatz backtracked, according to Fox News, and suggested it was time for the Democratic resistance to engage in dialogue. “Anyone uncomfortable with spraying tear gas on children is welcome to join the coalition of the moral and the sane,” he said. “We can argue about other stuff when we’ve got our country back.” (RELATED: Democratic Rep Jim Himes Bashes Fox News For Covering Migrant Caravan)

Schatz has recently been focused on climate change policy. Last month, he suggested that people wanting to be alive “after 2040” should be pretty upset over “inaction action” on climate change.

Look. I can read a poll. I understand that climate change doesn’t necessarily, by itself, drive voters to the polls. But here’s the thing – it really should. Anyone who is planning on being on the planet after 2040 should be pretty pissed at inaction action from people in charge.