GOP Reps. Brian Fitzpatrick of Pennsylvania and Francis Rooney of Florida are to introduce a carbon tax bill on Tuesday alongside Florida Democratic Rep. Ted Deutch. The Energy Innovation and Carbon Dividend Act, if passed, would slap a $15-per-metric-ton carbon fee on fossil fuel industries. While the bill has little chance of passing, it is intended to spark a debate over carbon pricing as the Democratic Party prepares to take over the lower chamber of Congress.

“More than a dozen federal agencies just warned us that if we don’t take dramatic action, climate change will knock 10 percent off of our GDP by the end of this century,” Deutch, the bill’s Democratic co-sponsor, stated to Bloomberg Environment. “Putting a price on carbon can help change the behavior of polluters. We hope our bipartisan bill will spur action on climate change before it’s too late.”

That $15-per-metric-ton fee would increase by $10 every year until reaching certain carbon emission targets. In order to shield citizens from higher fossil fuel prices, revenue from the tax would be given back out to households. Sponsors of the legislation believe it would slash greenhouse gas emissions by one-third over a 10-year period and a 90 percent cut by 2050, compared to 2015 emission levels.

The Energy Innovation and Carbon Dividend Act is notable in that it’s the first bipartisan carbon tax bill introduced in Congress in about 10 years. However, given the GOP will control the Senate and White House for at least the next two years, it’s passage appears quite bleak.

The bill comes not long after an outgoing Republican lawmaker, Rep. Carlos Curbelo, introduced a carbon tax bill of his own this year. Cureblo’s bill was more stringent, calling for a $24-per-ton fee on carbon. Much like the new bipartisan bill, Curbelo’s was doomed to fail from the beginning — and he endured attack ads from the right for even introducing it. 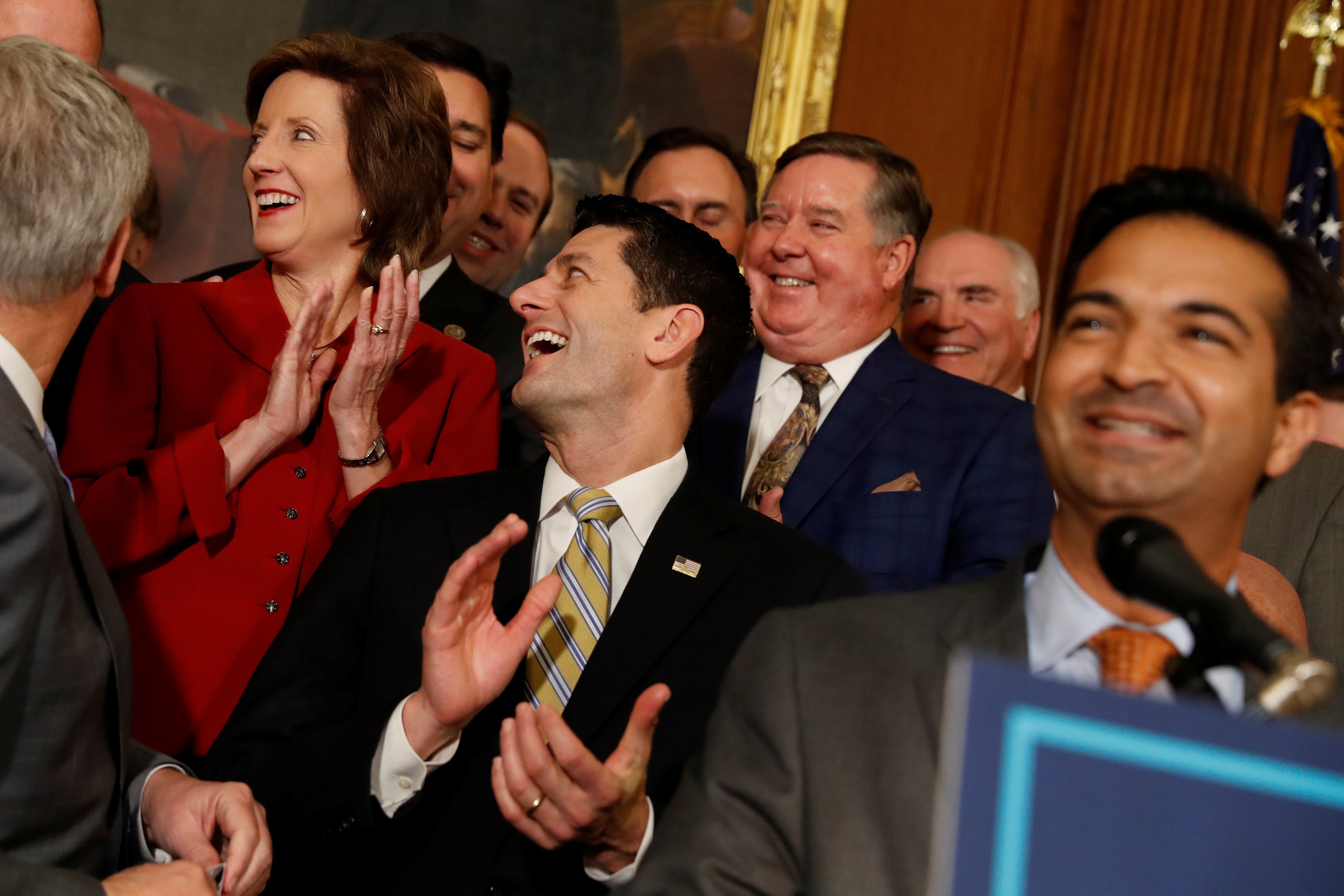 House Republicans, including Speaker of the House Paul Ryan and Rep. Carlos Curbelo (R-FL), celebrate at a news conference announcing the passage of the “Tax Cuts and Jobs Act” at the U.S. Capitol in Washington, U.S., November 16, 2017. REUTERS/Aaron P. Bernstein

Long considered one of the most at-risk Republicans heading into Election Day, Curbelo went on to lose his Miami area House seat to a Democratic challenger. Curbelo was one among many moderate Republicans on the Climate Solutions Caucus who lost re-election. Altogether, 13 GOP members of the bipartisan climate group lost their elections, and numerous others chose to retire. (RELATED: A Growing Number Of Democrats Are Signing On To Ocasio-Cortez’s Green New Deal)

Republicans Fitzpatrick and Rooney, both members of the Climate Solutions Caucus, survived their re-elections — and both will continue to work with Democrats on various climate change bills in the next legislative session.