Reporters from The Daily Caller spent some time with a group of African-American conservatives Wednesday, following them as they visited Senate offices lobbying for a bill that aims to take the “first step” toward overhauling America’s criminal justice system.

The “First Step Act,” which passed easily in the House of Representatives last summer, would roll back some of the initiatives of the 1994 Violent Crime Control and Law Enforcement Act —also known as the “Clinton Crime Bill.” Most importantly for its supporters, the bill intends to combat recidivism, which is the rate at which released prisoners return to criminal behavior.

If passed, the bill would allow some people in federal prisons to earn “good-time credit,” which would set them up for early release if they participate in programs which allow them to demonstrate improved behavior and preparation for life on the outside. The bill would lead to the release of an additional 3,900 prisoners in the first year of its implementation, according to estimates. (RELATED: Opinion: Prison Reform Is A Major Achievement For President Trump)

The group of mostly black conservatives met with Republican Sens. Steve Daines of Montana, Mike Lee of Utah, Rand Paul of Kentucky, Tim Scott of South Carolina and Lindsey Graham of South Carolina. They also found their way into the offices of a few other senators, not all of whom were available to meet with them. 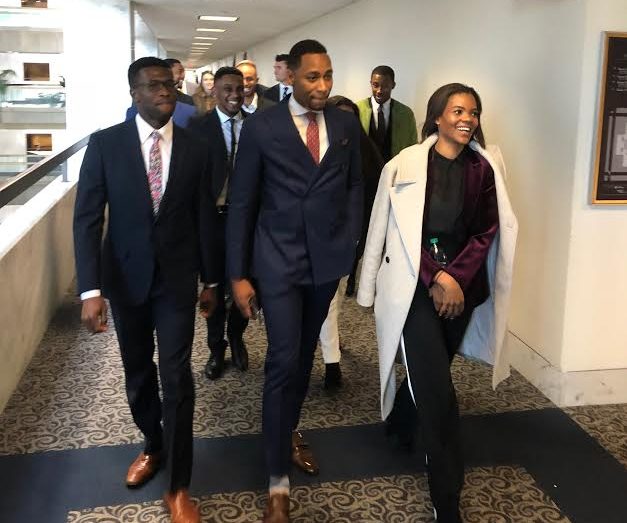 Candace Owens and Gianno Caldwell lead a group of African-American conservatives in the Hart Senate Office Building on Wednesday, Nov. 28, as they lobby in favor of the “First Step Act.” (Photo by Jon Brown/TheDC)

Among them were prominent young conservatives like Candace Owens, Charlie Kirk and Gianno Caldwell, each of whom spoke to The Daily Caller about why they are so passionate about ensuring the bill’s passage.

“It’s worked in Texas, it’s worked in Louisiana, it’s worked in other states,” Charlie Kirk, of Turning Point USA, said of the proposed reforms in the bill. “It’s in some ways an atypical issue for conservatives to be taking on, but that’s what I love most about [President Donald Trump], is that he’s willing to take on issues that are traditionally not always being taken on.”

“I don’t think anyone can make the argument that our prison system works, that somehow the prison system is working exactly how it should,” Kirk continued. “Once people leave prison, they’re much more likely to commit crimes after that. We as conservatives are worried about the financial burden that has on our society. We’re worried about societal burden. Obviously, we care a lot about freedom and we care a lot about justice and things like that, but it doesn’t help anyone when prisoners have the high recidivism rates that they have.” 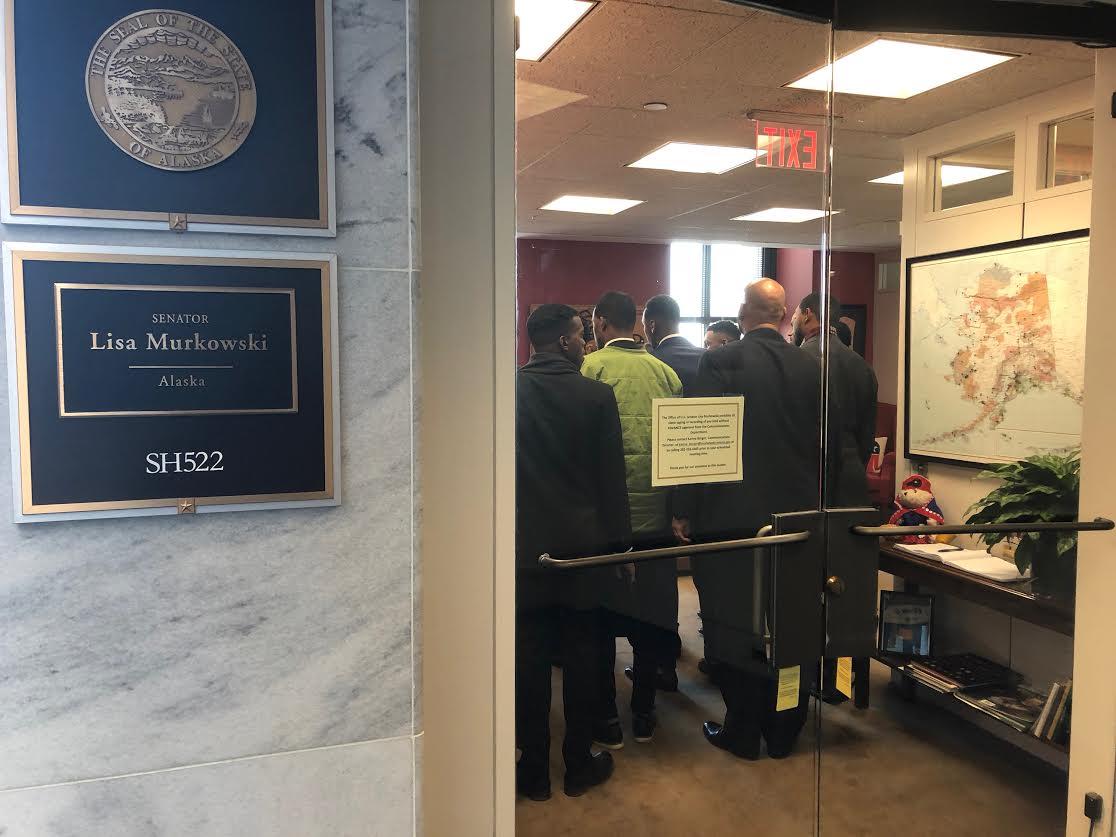 Candace Owens, who is also a part of Turning Point USA, has advocated prominently for conservative principles in the black community. She was often at the head of the group Wednesday, as they went from office to office in various Senate buildings. (RELATED: Twitter Suspends Candace Owens — Then Says It Was An Error After Backlash)

“We’ve taken a lot of heat because of that,” Owens claimed.

“I personally spent time speaking to inmates down in the correctional facility in Tallahassee, Florida,” she continued. “They all say the same thing: If the system was not punitive, and instead was rehabilitative, we would see a difference in our recidivism rates.”

When asked what impact she believes passing bills like this will have on attracting minorities to the Republican Party, Owens said, “This is it. I think what we’re realizing is that Republicans don’t know how to approach the black community. They don’t know how. For so long they have handed the reins over to the Left and the Republicans have been falsely accused of racism. They don’t even know how to enter into the black community. This is it. This would be a major win if it passed, and it would allow them to knock on doors and broker conversations with our community.”

“And Republicans have all the power right now to deliver it,” Owens maintained. “So it’s something that hits close to home. And it’s something that feels like it’s within our control to actually implement.” (RELATED: Diamond & Silk Say Democrats Are ‘The Real Racists,’ Talk About Their New ‘Dummycrats’ Documentary In Exclusive Interview)

Gianno Caldwell, a political consultant and analyst, has been working for half a decade on issues of criminal justice reform. “This is something that is very impactful for me because it statistically impacts literally every member of the black community,” he said.

“In 2014, there were 6.8 million people within the prison system — and when I say ‘prison system,’ I’m talking about federal prisons, state prisons, jails and on parole. And of those 6.8 million — which, as you know, is the largest population in the world under the corrections system — 34 percent of those folks are African-American, or 2.3 million.”

“So statistically, it impacts every African-American in this country. So certainly, knowing what happened with the effects of the ’94 crime bill, I think that we absolutely have to take opportunities like these with the First Step Act — the literal first step, in terms of reversing those very draconian effects from that bill.”

“I think we can do more, but even changes like this — which some people are saying are modest — I think have a very large effect and impact on not just the black community, but those who want second chances across the country. So this is a great opportunity to start the work and hopefully, at some point after, continue the work.” 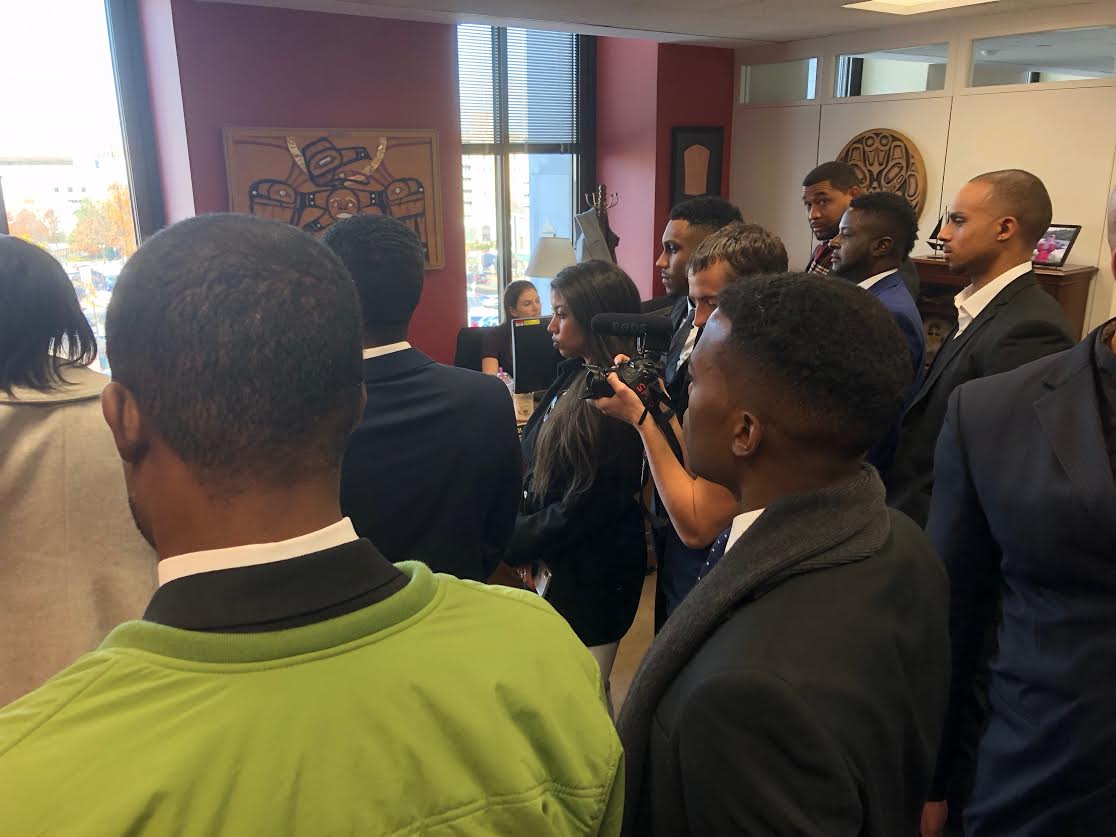 This bill would also allow judges to insert their own discretion into certain cases in order to circumvent mandatory minimums. Since having passed in the House, it has stalled in the Senate — but recently picked up steam after receiving the president’s endorsement. (RELATED: Pro-Trump Pastor Calls On Republican Senators To Pass Criminal Justice Bill, This Is Why)

Despite widespread bipartisan support, the bill still faces opposition from both liberals and conservatives. Referring to it as the “jailbreak bill,” critics on the Right worry that the bill would release dangerous criminals into the general population. Republican Sen. Tom Cotton made such a case in a column for National Review, saying that it “goes against core conservative principles,” and allows for the early release of “violent felons.”

Critics on the Left argue that the law doesn’t go far enough, because it only affects the federal prison population. The number of inmates in federal prisons comprise only 183,000 of the nation’s 1.5 million inmates.

The First Step Act is currently not set for a vote, though Senate Majority Leader Mitch McConnell is under pressure to bring it to the floor. Supporters believe they have the 60 votes necessary to send the bill to the president’s desk.