A federal judge responsible for supervising the power utility some believe played a part in starting California’s recent wildfires is now demanding the company come clean about the fires.

Clinton-appointed Judge William Alsup has given Pacific Gas & Electric until Dec. 31 to answer several questions about the company’s supposed role in the fires, which charred parts of California and lead to dozens of deaths. PG&E was convicted in 2017 in the fatal explosion of a gas pipeline in San Bruno.

The company is expected to answer questions related to “any wildfire started by reckless operation or maintenance of PG&E power lines” as well as “any inaccurate, slow, or failed reporting of information about any wildfire by PG&E,” according to Alsup’s brief.

“An accurate and complete statement of the role, if any, of PG&E in causing and reporting the recent Camp Fire in Butte County and all other wildfires in California since the judgment” he demanded in the brief.

Some believe the company is responsible for the Camp Fire that scorched hundreds of thousands of acres in Northern California. PG&E disclosed that its voltage power lines malfunctioned 15 minutes before the start of the Camp Fire was reported in the area on Nov. 8. It could take several months for investigators to determine what caused the fires.

The fire is 95 percent contained, according to the California Department of Forestry and Fire Protection (CAL FIRE). Much of the blaze was stifled after 2 to 4 inches of rain fell on the affected area on Nov. 23. 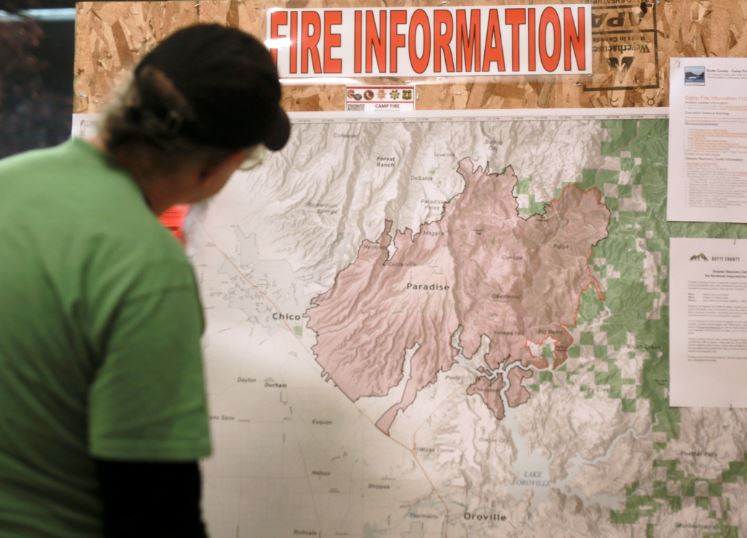 FILE PHOTO: A man looks at a map of the Camp Fire at a Red Cross shelter in Chico, California, U.S. November 21, 2018. REUTERS/Elijah Nouvelage/File Photo

“We are aware of the court’s notice and are currently reviewing,” PG&E said Tuesday in a press statement. (RELATED: California Considers Bailing Out Utility Company Suspected Of Starting Wildfires)

The company stated in a 2015 annual report that paid down $558 million in third-party claims and $92 million in legal costs associated with a 2010 gas explosion in San Bruno. The explosion killed eight people and affected another 500 others.

California’s energy regulator, meanwhile, is pledging a review of PG&E, as well as possibly breaking up the state’s largest utility. The regulator could also allow the utility to pass costs associated with liabilities from wildfires to customers.

The utility has withdrawn all of the available cash from its revolving credit lines, according to a Nov.16 Securities and Exchange Commission filing. Companies often take such actions before a bankruptcy filing. The move comes as wildfires continue scorching large sections of Northern California.