Lutherans have the highest percentage of drinkers among Protestant Christian denominations, according to a LifeWay Research poll concerning Protestant views on alcohol.

The poll, released Tuesday, showed Lutherans are more likely than members of most other Protestant denominations to admit to or embrace drinking alcohol. The percentage of Lutherans polled who admitted to drinking far outpaced other those of other denominations at 76 percent, followed by 62 percent of Methodists, 43 percent of nondenominational churchgoers, 33 percent of Baptists, and 23 percent of Pentecostals/Assemblies of God. (RELATED: Beer Made In Honor Of Chainsaw Nun From Hurricane Irma)

“Churchgoers’ perspectives on alcohol are not changing very fast,” said Scott McConnell, executive director of LifeWay Research, according to Christianity Today International. “The majority believe that Biblically they can drink, but they choose not to.”

Drinking trends also vary based on church attendance and adherence to evangelical beliefs. Of those who attend church weekly, 64 percent said they believe that drinking alcohol could cause other people to stumble, that is it would either offend others and cause them to doubt or would cause them to give into unhealthy temptation. As a result, only 37 percent of weekly churchgoers said they drink. 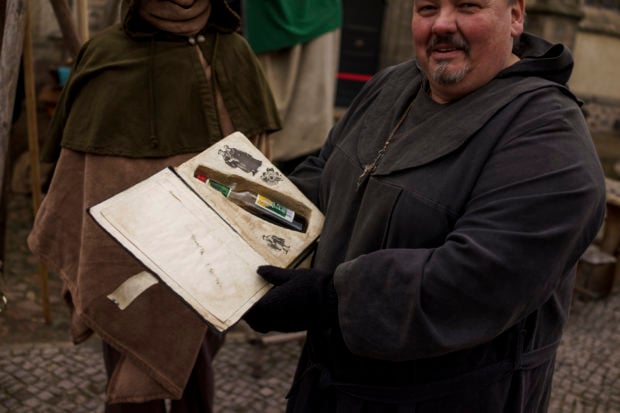 A participant holds a bottle with alcohol in a book in the day to commemorate the 500th anniversary of Luther’s nailing of his 95 theses on the doors of the nearby Schlosskirche church on October 31, 2017 in Wittenberg, Germany. (Photo by Carsten Koall/Getty Images)

The survey found a similar split among those who professed evangelical beliefs, with 74 percent saying their personal alcohol consumption could cause others to stumble and only 33 percent admitting to drinking.

LifeWay surveyed 1,010 American Protestant churchgoers for the study in August 2017. The poll has a margin of error of 3.1 percentage points.