A New Jersey township is charging a family $2,000 per night to allow their Christmas lights display to continue, potentially violating their First Amendment rights, the family said.

Thomas and Kris Apruzzi said Old Bridge Township demanded they pay $2,000 per night that the display is on for police security services, and $1,000 to fund a bus to shuttle students home from a local school.

The Apruzzi family’s 70,000-light Christmas display has gone on for over 10 years and, while free to observe, has helped raise money for various charities. Thomas said the township’s demands are a violation of his right to freedom of speech and religious expression. (RELATED: Melania Trump Claps Back At Christmas Decoration Critics: ‘I Think They Look Fantastic’)

“We thought we were going to work on arrangements. But instead they said I have to pay the police department $2,000 a night to have police officers at my house to maintain order,” Thomas said of his summoning to the local police station, according to Bridgewater Courier News.

“We said no. It’s my First Amendment right — my freedom of speech and my freedom of religion,” he added. “I am a Catholic and I believe very much in Christmas. That’s how I express myself — through my lights. There is so much negativity in the world that if I can make people happy just one day, why not?” 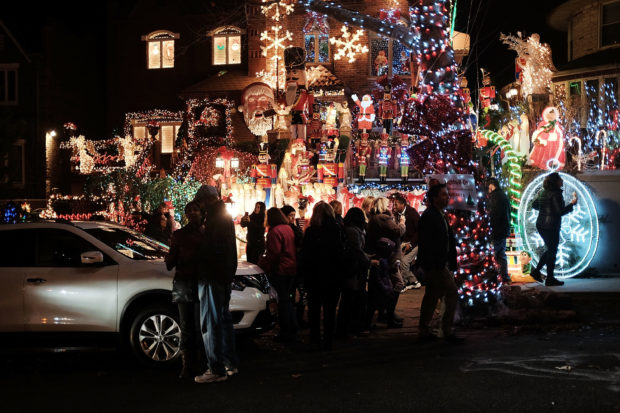 Thomas said the police chief and Mayor Owen Henry told him his display would be shut down if he did not pay the fees. Henry, however, argued that was not the case.

“I’m not a grinch,” Henry said. “It’s all about public safety. We need to take the steps necessary to make sure that event goes off in a safe, orderly manner. We have not told Mr. Apruzzi to shut his light off. We have not and I will not.”

Thomas expressed bemusement at what he claimed was a stark change in Henry’s attitude.

“I think it’s amazing how all of a sudden in a matter of about 12 hours the mayor is changing his story now,” Apruzzi said. “I’m not paying for nothing.”

A family friend set up a GoFundMe page to raise money to cover the fees and allow the Apruzzi’s traditional light show continue. The page’s author explained the Apruzzis and about 100 fellow residents met with the city council Nov. 19 and received approval for the light show “without any stipulations,” but that the police chief and mayor made their fee demands Nov. 26.

Henry said the local police will implement safety measures whether or not the Apruzzis reimburse the cost. He explained that the money for such measures is not in the town’s budget.

“As the mayor and the chief of police we have no choice. Even if the council doesn’t go there, I still have to go there,” Henry said. “At the end of the day, we are going to expend to this money — $45,000 or $50,000 of hard-earned taxpayer money — regardless of whether he is going to reimburse us or not. The residents of Old Bridge are paying for this. They have to acknowledge that. We have to make sure that that venue is safe.”