CNN’s “Reliable Sources,” a program dedicated to all things media, failed to mention Sunday that one of the network’s contributors was canned for controversial comments about Israel.

CNN contributor Marc Lamont Hill was fired Thursday, just one day after he spoke about the Israel-Palestine conflict at the U.N. commemoration of the International Day of Solidarity with the Palestinian People.

“We must prioritize peace, but we must not romanticize or fetishize it. We must promote non-violence at every opportunity, but cannot endorse narrow politics that shames Palestinians for resisting, for refusing to do nothing in ethnic cleansing,” Lamont Hill said during his speech. “Justice requires a Free Palestine from the River to the Sea.”

“From the river to the sea” is a slogan used by Hamas and Palestinian nationalists that endorses the destruction of the state of Israel, according to the Anti-Defamation League.

CNN media reporter and “Reliable Sources” host Brian Stelter covered the firing in his newsletter on Thursday night, noting that there are varying reactions to CNN’s decision to let Lamont Hill go. 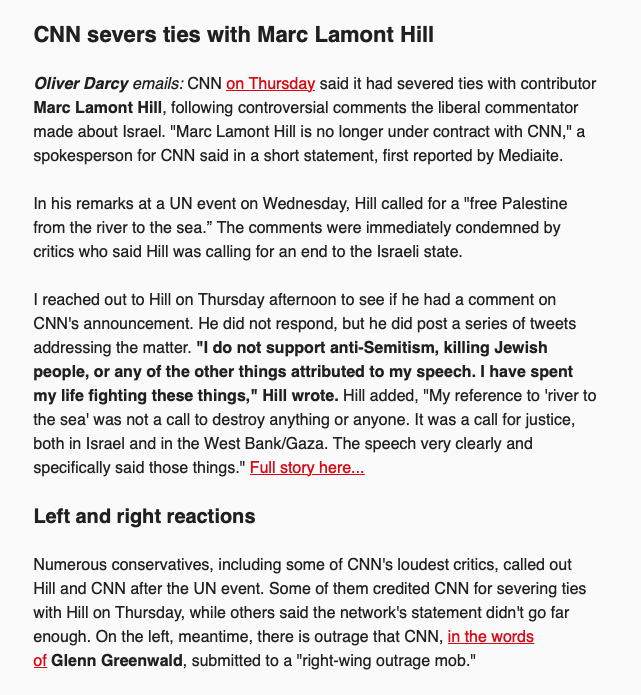 Stelter did not cover any of those reactions during his show, however the media host did have to contend with the passing of a former president.

Stelter did not respond to a request for comment.