“This is my current work situation. ‘Mom, why don’t you put the computer down and keep petting me?'”

— Beth Baumann, associate editor, Townhall, who is talking about her dog.

The Best of… Funeral Observers 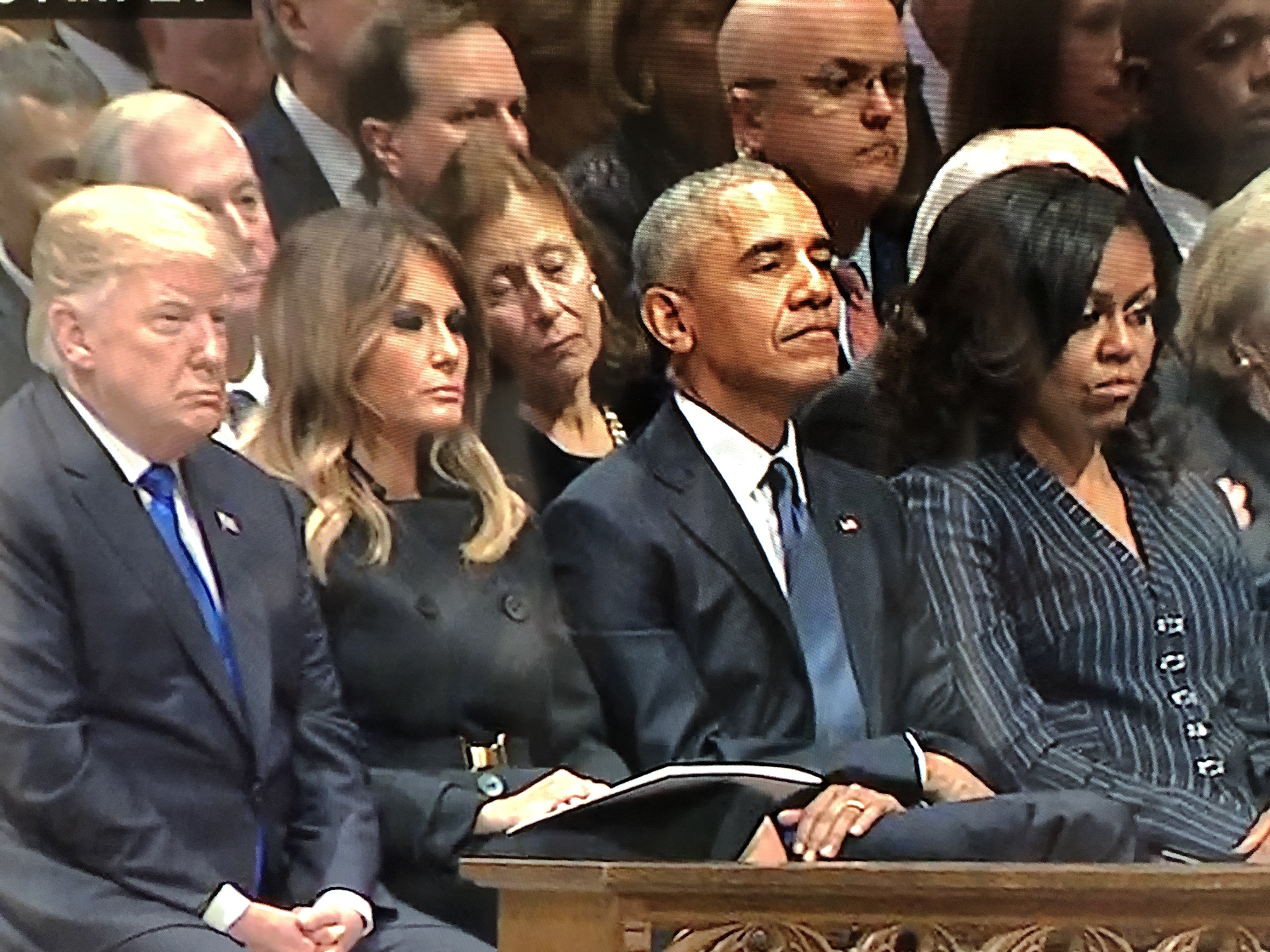 “The president and first lady are entering the cathedral led down the aisle to their seats where they are next to the Obamas. Trump shakes hands with each of the Obamas. None of them looked happy to see the other.” — Peter Baker, NYT.

“Our president met the minimal standards of decency and that’s it.” — Paul Begala, political commentator, on CNN Wednesday afternoon.

“My takeaway from the hw funeral is that Jimmy Carter will outlive me somehow.” — Asawin Suebsaeng, The Daily Beast. 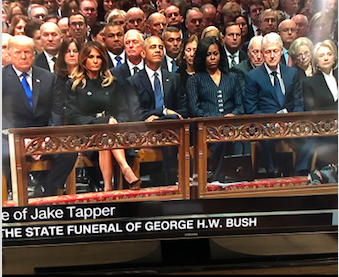 “Maybe it’s just me, but it almost looks like there wasn’t a seat for Al Gore so he just pulled up a chair next to the Cheneys.” — Conner O’Brien, defense reporter, Politico.

“Did anyone else see that laugh from Trump when Simpson said Bush called him about getting scrutiny from the media?” — Cameron Cawthorne, Washington Free Beacon.

“The Bushes have so far not taken emotional shots at the toxicity of Trump’s Washington. They’ve focused instead on unity, love, laughter, and importance of character. And an emotional 43 says his father taught him how to ‘serve with love’ in his heart for his fellow Americans.” — Katie Rogers, White House correspondent, NYT. 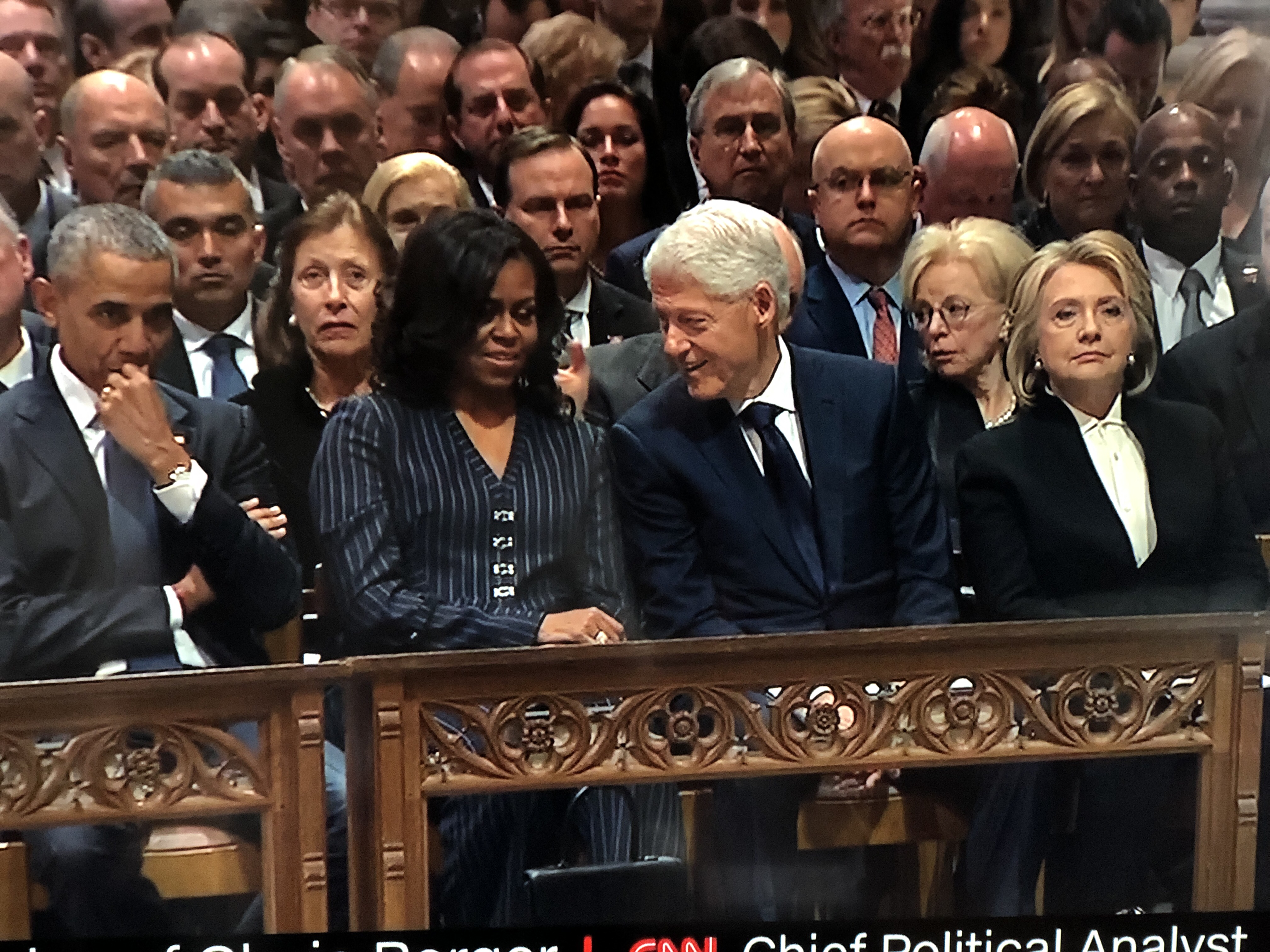 And they can also be serious … 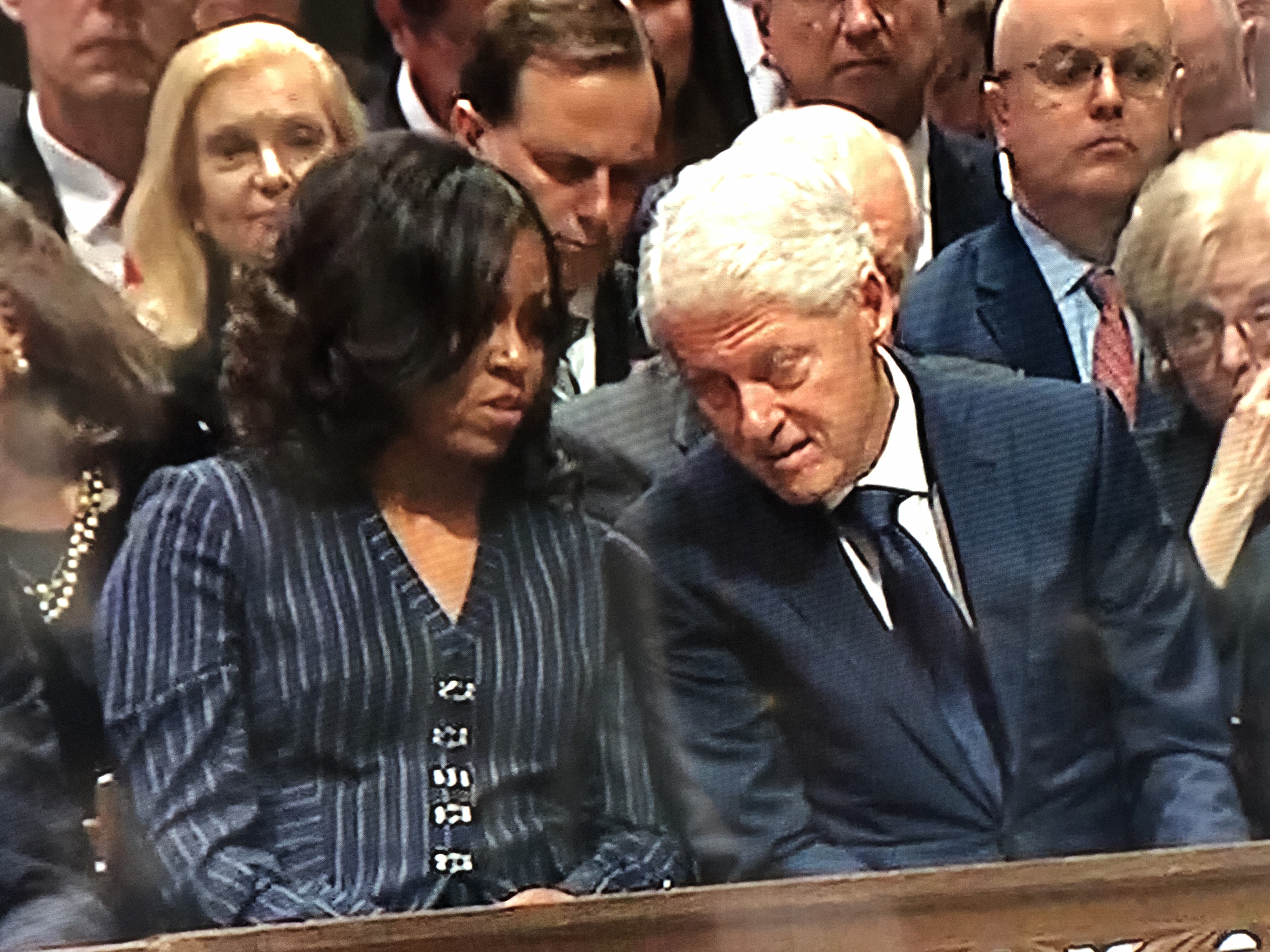 The Media Observer: MSNBC nails Trump for… nothing

“Totally bizarre conversation on MSNBC right now … They’re nailing Trump for making the Bush funeral about him, when he just sat there and listened, because all the praise of Bush was an implicit rebuke of Trump, and therefore Trump made it about himself, ok I’ve gone crosseyed.” — David Rutz, Washington Free Beacon.

Faith journo advises no drama over the holidays

“Avoid drama this holiday season. Stay away from it. When it arises, avoid it and protect yourself and your family. This is the time of year when we honor Christ and those around us. Sometimes choosing love means steering clear of those incapable or unwilling to grant it back.” — Billy Hallowell, has appeared in Faithwire, WaPo and more.

Sydney Leathers on boyfriends past

“In my early 20’s I dated a guy w/a drinking problem. one time we fell asleep on my couch & he pissed his pants. He still likes my pics on Instagram. I want the confidence of a man who drunkenly pisses all over himself & his gf & then still likes her posts 7 yrs later.” — Sydney Elaine Leathers, former sexting partner to ex-Rep. Anthony Weiner (D-N.Y.).

That’s DR. Ronan Farrow to you

“@RonanFarrow is now Dr. @RonanFarrow – he just got his PhD from Oxford University. And not an honorary one…the real deal!” — Yashar Ali, HuffPost, New York Mag.

Reporter: If you don’t say ‘off the record’ you get what you get

“There are just a few cardinal rules in journalism, and not publishing things said in off-the-record conversations is one them. But if I invite you to comment, and you call and proceed to talk without saying “this is off the record” — I will publish any & all newsworthy things.” — Rachel Cohen, The Intercept.

“Beets exist to remind us, [eight] hours later, of our mortality. Beets are a gift from God.” — Gene Weingarten, a “humor” columnist for WaPo.

“NY Time’s reporter Katie Rogers is either lazy or incompetent. She never bothered to contact me to ask if I knew whether President Trump had read my book before tweeting about it. He had. He recounted to me parts of chapters that he would only know from reading the book.” — Gregg Jarrett, author of The Russia Hoax.

Finding love over the holidays…

“According to Hallmark if I am to find love this holiday season I have to move back into my parents’ house, take a job as a waitress, and when it’s snowing kiss someone who had previously insulted me.” — Lyz Lenz, Columbia Journalism Review.

“I know our nation is honoring his memory right now, but President George HW Bush was profoundly wrong about broccoli. Broccoli is great.” — Peter Sagal, NPR.

David French, National Review: “I don’t know the details of the Weekly Standard story, so I won’t comment until I know more (other than to say that I would be very sad to see it fold). But this I know, The Examiner’s @SethMandel is the farthest thing from a Trumpist, and anyone making that case is just wrong.”

Salena Zito, Washington Examiner: “I would like to see people not wish for other people lose their jobs. Ever. Anywhere. This is an attitude I fail to understand sir and one I would never embrace. We need more grace on Twitter.”

She was reacting to a Twitter follower who wrote, “I would like to see WashEx get rid of Paul Bedard and Salena Zito.”

On the shaky state of The Weekly Standard …

“I hope those dancing on the graves of those who lost jobs never know the fear of losing a paycheck and health insurance with kids at home.” — Bethany Mandel, a political commentator who writes for The Federalist. (RELATED: The Weekly Standard is expected to shutter in weeks)

Ben Shapiro, The Daily Wire: “There are 330 million people in America. These three dudes are the best we could come up with, and the latest alternative was the terrible lady on the end.”

Shapiro’s apology: “Lots of folks upset with the timing of this tweet. Fair enough. I apologize for the timing.”

“The big pink elephant in that Cathedral right now: Must be very lonely to be a Trump right now. #Remembering41” — Jimmy Williams, opinion journal, political consultant.

A viewer writes, “@Chris Cuomo rocking that blanket on live TV without a care in the world.”

Cuomo: “I don’t fake the funk. It was freezing – but it was an honor to witness President Bush’s funeral. The messages were powerful and timely and his life was well-lived.”

“I would love your recs for a good vegan dinner recipe. No avocado. No weird shit. No complicated three-day soaking things. Thank you.” — Roxane Gay, writer, commentator, feminist, professor.