Some activists are claiming France failed to find a way to nudge people away from fossil fuels while reportedly misunderstanding the plight of the middle class. Still, others believe high taxes are still a viable option for shifting away from oil products.

“Like everywhere else, the question in France is how to find a way of combining ecology and equality,” Bruno Cautrès, a researcher at the Paris Institute of Political Studies, told The Washington Post.

He added: “Citizens mostly see punitive public policies when it comes to the environment: taxes, more taxes and more taxes after that. No one has the solution, and we can only see the disaster that’s just occurred in France on this question.”

Cautrès was referring to Macron’s decision on Tuesday to temporarily suspend a highly unpopular gas tax increase he imposed in January to fight climate change. Macron’s about-face came after weeks of protesting and rioting that left parts of Paris in shambles. 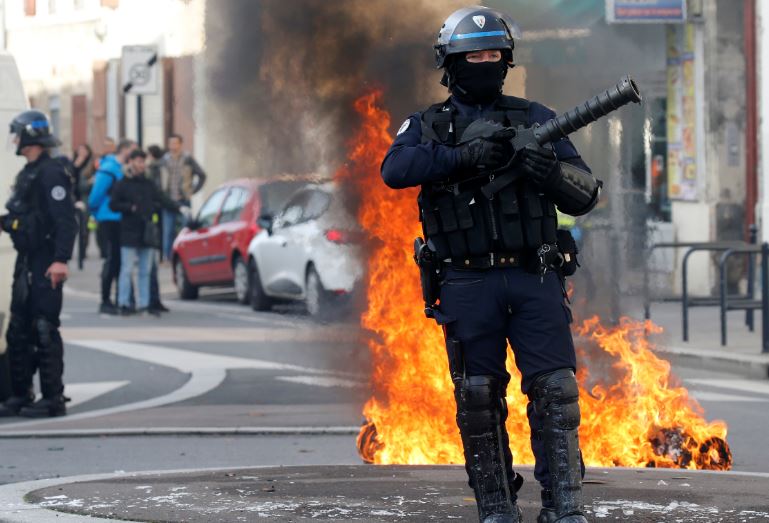 A French riot policeman stands next to a burning trash container as youth and students protest against reform plan in the streets of Bordeaux, France, December 5, 2018. REUTERS/Regis Duvignau

“Higher taxes on energy have always been a hard sell, politically,” N. Gregory Mankiw, an economics professor at Harvard University, told reporters. “The members of the American Economic Association are convinced of their virtue. But the median citizen is not.”

Much of the turmoil comes amid Macron’s insistence on banning all oil and gas drilling by 2040. France is not the only European country attempting to ding fossil fuels. The plan is designed to combat climate change, a problem Macron and others believe poses an existential threat. Part of the gambit requires high taxes.

French citizens are currently paying $1.73 per liter in American dollars, which is roughly $6.57 per gallon. The bulk of the price comes from oil prices increases – France gets nearly 99 percent of its fuel from imports. But the gas tax increase, enacted in January, is equivalent to up to 25 cents a gallon.

Jerry Taylor, head of the Niskanen Center, staked out a slightly different position – his group supports carbon taxes. He noted in a Twitter thread Tuesday that there is a big difference in fuel prices between France and the U.S.

“A carbon tax of $10/ton would increase gasoline prices by about 10 cents/gallon,” Taylor wrote. “Thus, to get U.S. fuel prices to the threshold that inflamed French citizens, we’d have to impose about a $400 carbon tax.” He was comparing the two countries’ gas prices to refute claims that carbon pries lead to upheaval.