Unemployment amongst black Americans fell in November to 5.9 percent, tying a record low.

Meanwhile, the national unemployment rate stood unchanged at 3.7 percent, according to Bureau of Labor Statistics data. 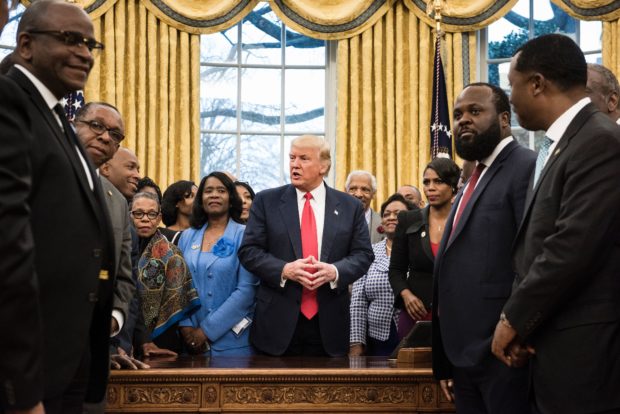 US President Donald Trump talks with leaders of historically black universities and colleges before posing for a group photo in the Oval Office of the White House before a meeting with US Vice President Mike Pence February 27, 2017 in Washington, DC. (BRENDAN SMIALOWSKI/AFP/Getty Images)

While the unemployment picture for black Americans is still higher than other demographic groups, it had never fallen below 7 percent since the Bureau of Labor Statistics began tracking the statistic in 1972. The rate for Hispanics is 4.5 percent, while whites are at 3.4 percent, and Asians stand at 2.7 percent.

The black unemployment rate also hit 5.9 percent in May, then a first-time record.

Employment in manufacturing has increased by 288,000 over the year, BLS reported, with transportation and warehousing adding 192,000 jobs, and professional and business services adding 561,000. (RELATED: Trump To Black Voters: ‘What The Hell Do You Have To Lose?’)

GOP Chair Ronna McDaniel touted the numbers via Twitter on Saturday, calling it a “huge achievement” for President Trump.

The media will barely cover it, but that’s a huge achievement for @realDonaldTrump!