What is the world record of government cash reward for a fugitive? The answer: $3 billion, plus a $100-million fee for a middleman, give or take.

Like so many stories originating from China recently, this one will blow your mind.

The New York Times recently reported the 1MDB case, a scandal involving billions of dollars of money laundering and embezzlement in Malaysia’s state development fund. The U.S. Justice Department has been investigating 1MDB for a few years.

The key figure in the case, Malaysian citizen Low Taek Jho — described by Wall Street Journal reporters as a “billion-dollar whale” — hired the former vice chairman of the RNC finance committee, Elliott Broidy, to lobby the Trump administration to drop the investigation with a fee of $75 million.

The whole thing read like a badly written spy novel. And just like any Ian Fleming book, there is a twist,

On November 20, 2018, in a press conference with joint help from the former White House chief strategist Steve Bannon and exiled Chinese real estate tycoon Guo Wengui, Guo announced that he would pursue a lawsuit against Elliott Broidy.

The story exposed in the hacked documents is explosive.

On June 5, 2017, Broidy wrote an email message to his business partners. One paragraph read:

The country involved has good relations with China and [the United States]. And offered a lucrative opportunity: China wants to extradite from the [United States] Guo Wengui who is very critical of President Xi Jinping and now living as a fugitive in NYC. Guo defrauded many investors including Abu Dhabi for $3 billion. With elections coming up in China this fall, the Chinese want him to be kept quiet. I believe the negotiation can take place which includes Abu Dhabi receiving its $3 billion back and Abu Dhabi extraditing Guo from [the United States] to Abu Dhabi. Later Abu Dhabi would allow extradition to China. I was told that China would pay us and if the facts are indeed correct, I assume Abu Dhabi would feel obligated to pay a fee as well. 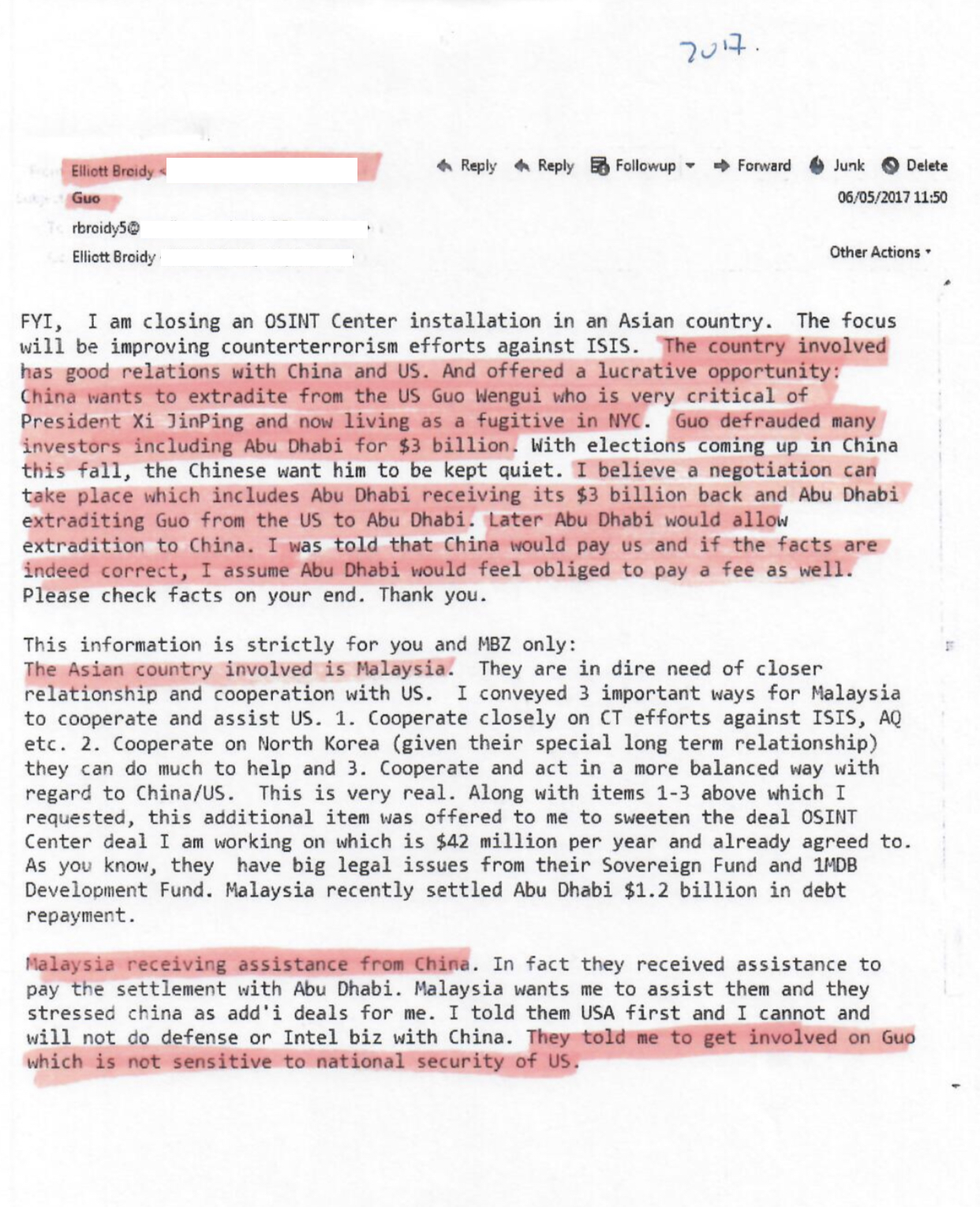 The country involved was Malaysia. At the time, the Malaysian Prime Minister Najib Razak, who lost his re-election bid a few months later, worked closely with Broidy’s firm.

The $3 billion proposal seemed to fall into Broidy’s hands from a woman named Nickie Lum Davis in Los Angeles. On May 22, the Broidies received a long document from Davis, which listed detailed allegations by the Chinese government against Guo, including eight cases pending in court and 11 under investigation.

Apparently, Davis, a private citizen, had direct contact to the top level Justice Department officials. On May 28, Davis forwarded a letter from the U.S. Attorney General Jeff Sessions to Broidy. The AG said: “Thank u for ltr of may 19. I regret my travel sched. make it impossible to welcome Vice Minister Soong.”

Soong’s full name was Soong Li Jun, Vice Minister of the Chinese Public Security. He also held positions in the Chinese Communist Party, in charge of “political defense” and international espionage, with the rank of lieutenant general. He came to D.C. to seek the extradition of Guo. After arrival, he placed several lengthy phone calls to Guo, begging Guo to grant a meeting. Guo later posted the taped conversations online.

Sessions, seemingly worried about the illegal activities of the Chinese government on the U.S. soil, replied to Davis: “We have received reports that Chinese law enforcement teams have continued to travel to the [United States] in order to persuade a fugitive to return to China in a manner of us law and in a manner contrary to us law.” 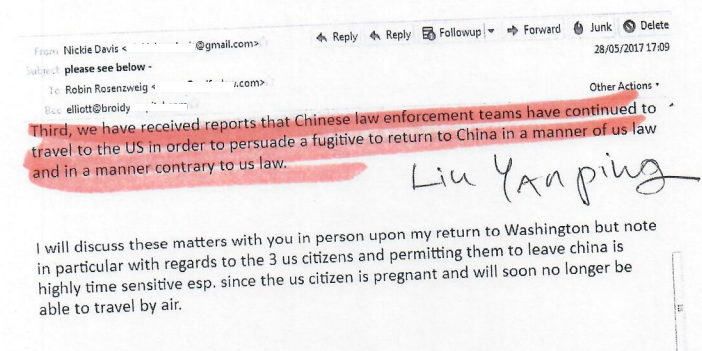 Davis, apparently speaking on behalf of the Chinese government, replied: “The issues are quite important and I have timely reported them to Beijing and Beijing will take them seriously.” She also said that Vice Minister Soong still wanted to meet with the AG, and was willing to wait as long as needed in D.C. 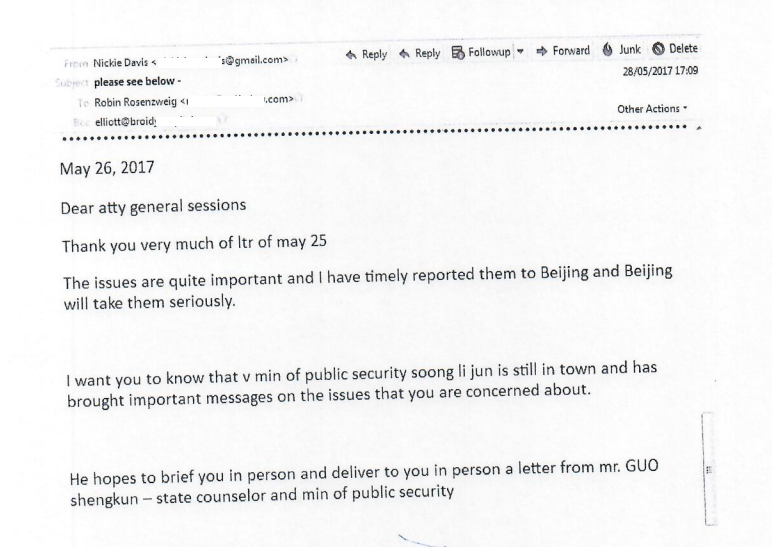 The meeting did not materialize.

The incidents mentioned by Sessions involved a minister-level party secretary in the Chinese State Security, Liu Yanping, who led a team of four people to New York to negotiate with Guo. The gang was detained by the U.S. law enforcement in the New York JFK airport, which made headlines.

Around that time, the Chinese top leaders asked Steve Wynn, the Las Vegas gambling tycoon and the chairman of the RNC finance committee, to carry a letter to President Trump, demanding Guo’s extradition. Wynn owned a large casino in Macao, which depended on the Chinese-controlled local government to grant him a permit.

A Wall Street Journal report indicated that Mr. Trump raised the issue in a cabinet meeting. Mr. Sessions, who had a great deal more information, expressed his strong objection and threatened resignation.

In the following month, the Chinese government made some crucial moves to extradite Guo, who applied for political asylum as a resident of Hong Kong. Davis emailed the Broidies a document issued by the Hong Kong government the United States, demanding extradition of Guo, his wife and his children.

The document stated that the extradition treaty existed between Hong Kong and the United States, but no such treaty exists between the two countries.

China, however, promised to pay a price for Guo’s extradition: “China will immediately return 2 [U.S.] prisoners being held in China that are currently requested by the U.S. Depart. of Justice, Attorney General Jeff Sessions.” And: “China will immediately take back 60 illegal criminals being held here in the [United States], which have been a major point of major contention since [the] previous administration.” 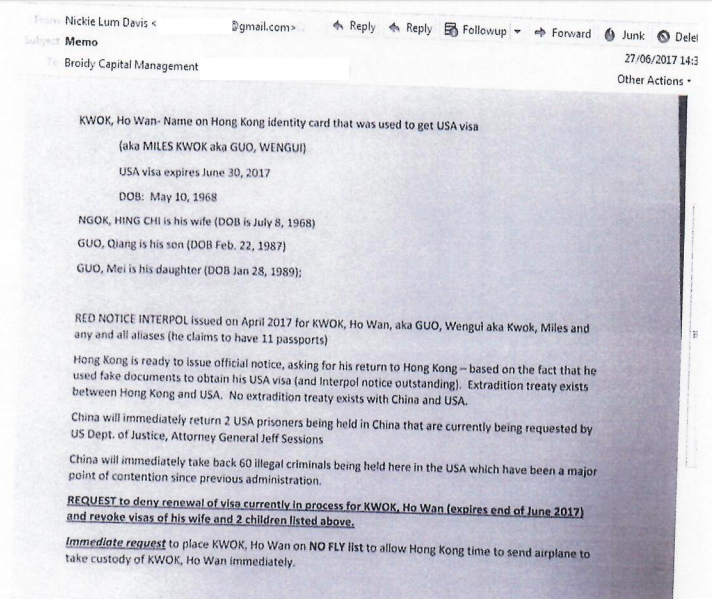 Soon after, the Broidies received $375,000 from Davis. This was but a tiny appetite of a lavish banquet, however. In the subsequent emails, the Broidies were talking about hundreds of million from China’s New Silk Road project through Malaysia.

Even Ian Fleming could not imagine a story involved that much money.

Sasha Gong, a journalist with a Ph.D. from Harvard University.