Documents obtained by The Daily Caller show that the aide, Saud al-Qahtani, directly secured the services of BGR Group and Squire Patton Boggs for services on behalf of the Kingdom of Saudi Arabia in 2016.

Qahtani has been among the closest advisers to Crown Prince Mohammed bin Salman, Saudi Arabia’s de facto head of state. Prince Salman sent 11 messages – and maybe more – to Qahtani in the hours immediately surrounding Khashoggi’s grisly murder, according to a classified CIA report obtained by The Wall Street Journal.

A Foreign Agents Registration Act (FARA) disclosure received by the U.S. Department of Justice on March 15, 2016 shows BGR Government Affairs as a U.S. lobbying group working directly with Qahtani to represent the interests of Saudi Arabia. 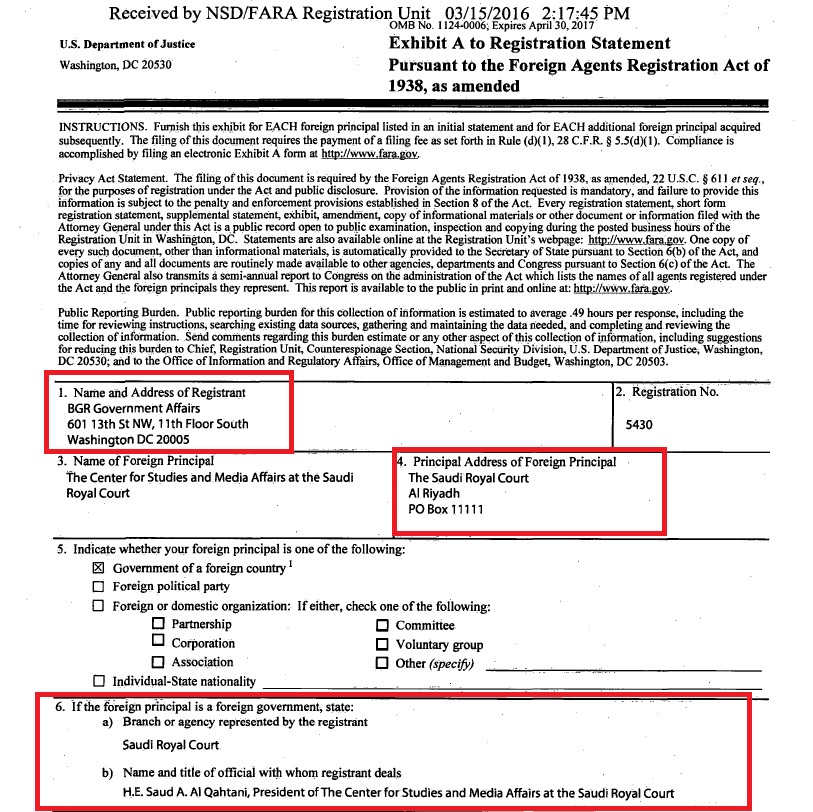 Qahtani signed the BGR Group FARA registration statement for Saudi Arabia. For his professional title, Qahtani identified himself as president of the Center for Studies and Media Affairs at the Royal Court.

“We are delighted that the Center has agreed to retain BGR Government Affairs LLC,” a letter attached to BGR Group’s March 2016 registration statement beams.

“In consideration for the services provided by BGR, The Center agrees to pay BGR annual professional fee of $500,000.00, which will be paid in advance in equal quarterly installments of $125,000.” 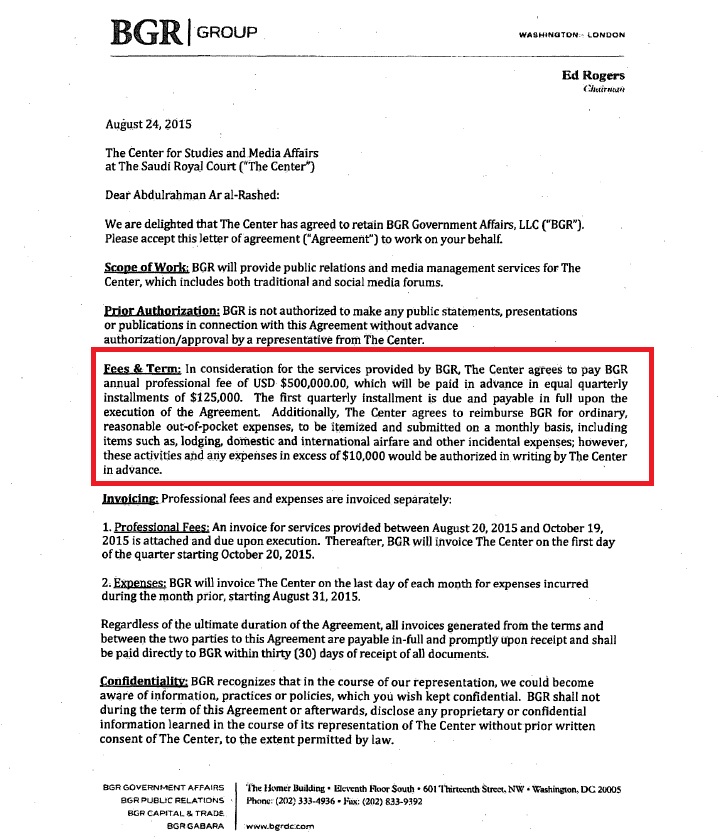 BGR Group describes itself as a bipartisan lobbying and public relations firm.

In 2018, BGR Group has generated $20,294,000 in lobbying revenue from a diverse roster of current clients including Anheuser-Busch InBev, Chevron Corp, the University of Mississippi, Verizon Communications and the governments of Azerbaijan and Ukraine. BGR Group’s largest single client account in 2018 appears to be the government of India.

The Department of Justice received a similar FARA on September 20, 2016 showing Squire Patton Boggs as an agent representing the interests of Saudi Arabia which worked directly with Qahtani. 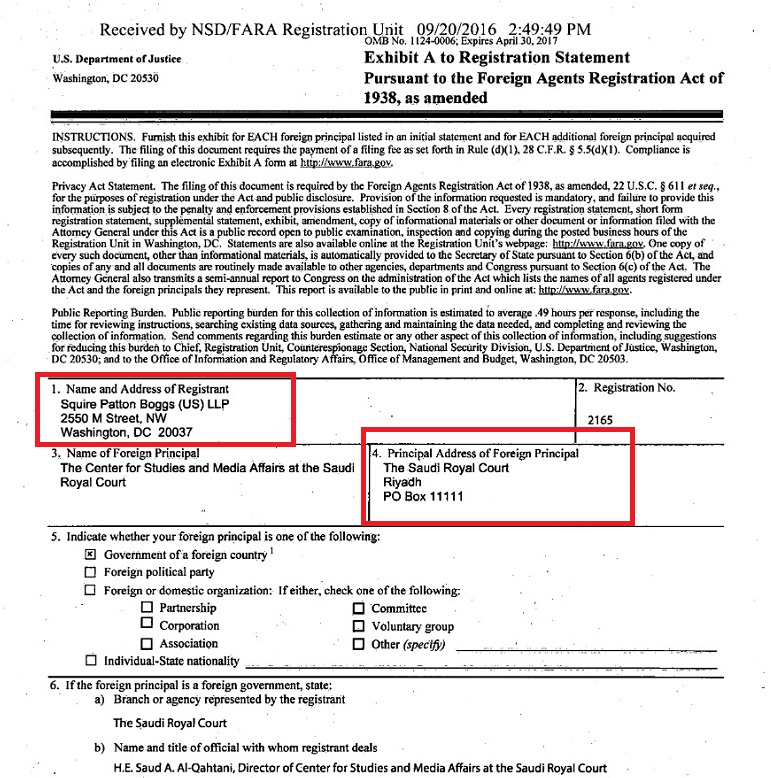 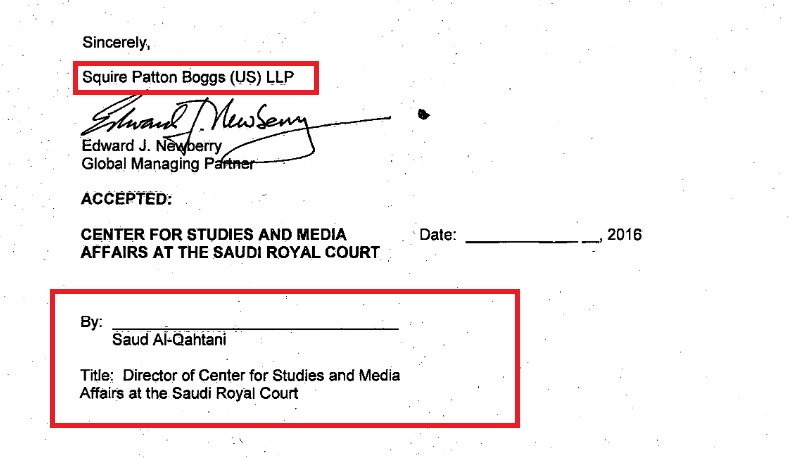 “We thank you for the opportunity to represent Center for Studies and Media Affairs at the Saudi Royal Court in providing legal and strategic policy advice and advocacy on foreign policy and related issues in the U.S. government,” a letter attached to the Squire Patton Boggs September 2015 registration statement declares.

“Our fees for this representation will be $100,000 per month, plus expenses.” 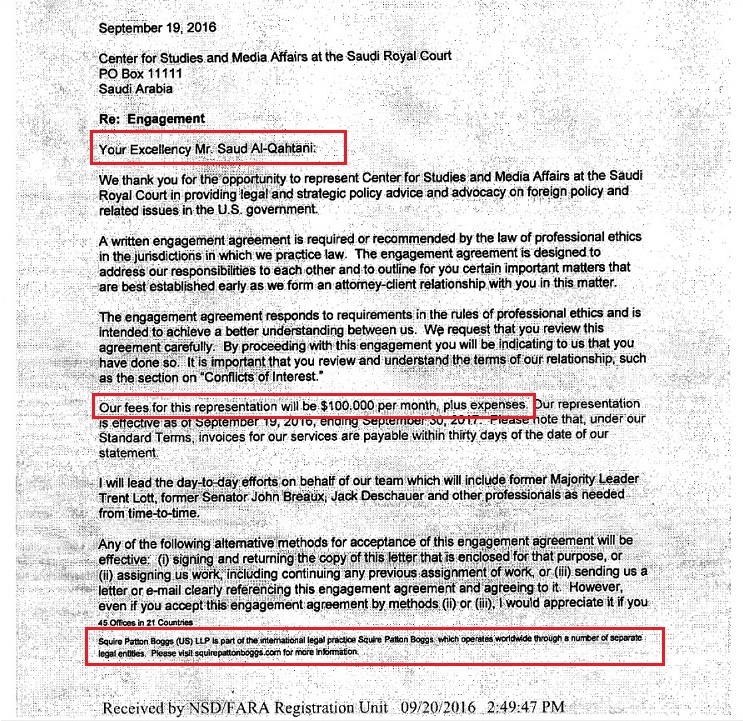 In 2018, Squire Patton Boggs has generated $18,620,000 in lobbying revenue from an array of clients including Amazon.com, Berkshire Hathaway, Wake Forest University and several U.S. cities including Las Vegas, New Orleans and Portland. The largest single client account of Squire Patton Boggs in 2018 appears to be huge food conglomerate Mars, Incorporated.

Qahtani, 40 years old, was until recently the head of the Center for Studies and Media Affairs at the Saudi Royal Court, a murky media arm of the Saudi monarchy. This entity appears in a multitude of FARA documents but appears to have little if any presence otherwise.

In recent years, Saudi Arabia has been intensely investing in a lobbying blitz to influence American politics. The chief goal of the autocratic, oil-rich nation has been to convince Congress to overturn the Justice Against Sponsors of Terrorism Act (JASTA), a federal law which allows American citizens to sue foreign governments for deaths and other damage related to terrorist attacks if the foreign governments financed those attacks.

A group called 9/11 Families and Survivors for Justice Against Terrorism is using the law to sue Saudi Arabia in civil court.

Terry Strada, whose husband, Tom, was killed in the Sept. 11, 2001 terror attacks in New York City, is the chair of the group.

“The fact that the same operative responsible for the killing of journalist Jamal Khashoggi was also responsible for the massive lobbying campaign to fight the Justice Against Sponsors of Terrorism Act should surprise no one,” Strada told The Daily Caller concerning Qahtani.

“This guy is a tough, evil dude. He is giving orders — orders from the Kingdom,” she said of Qahtani.

“The 9/11 families have been trying to stem the flow of money that gets to these barbaric terrorist organizations,” she said.

“Why does every administration choose to protect the Saudis over American interests — over the 9/11 families? What do they have?”

In its effort to influence U.S. politics, Saudi Arabia has spent tens of millions of dollars and enlisted another dozen or so lobbying and consulting firms in addition to BGR Group and Squire Patton Boggs. These firms include Sphere Consulting, Glover Park Group, the Podesta Group and Hogan Lovells.

As The Daily Caller reported nearly two years ago, Saudi Arabia’s government also funded luxurious, all-expenses-paid trips to Washington, D.C., for the veterans, which include stays at the posh, $500-per-night Trump International Hotel.

Last week, The Washington Post re-reported TheDC’s story about the Trump Hotel stays, noting that the Saudi government purchased roughly 500 hotel nights at the Trump property in a three-month period.

Qorvis MSLGROUP, “one of the largest public relations firms in the world,” spearheaded the effort to recruit military veterans from around the nation to take all-expenses-paid trips to Washington, D.C. to eat, drink, take in the sights and discuss JASTA with members of Congress and their staffers.

Strada, the 9/11 Families & Survivors United for Justice Against Terrorists chair, detailed the mechanics of lobbying Congress in Washington. In a nutshell, she told TheDC, lobbying means literally walking into congressional office buildings to greet members of Congress and speak to staffers. In this case, the military veterans would communicate rehearsed talking points.

During his presidential campaign, now-President Donald Trump expressed vigorous support for the Justice Against Sponsors of Terrorism Act.

Former Sen. Trent Lott, a Republican and co-chair of the public policy practice at Squire Patton Boggs, emailed Senate legislative directors in 2016 to suggest that JASTA would cause foreign countries to retaliate against American businesses and to abandon the United States as a hub for investment.

“Many foreign entities have long-standing, intimate relations with U.S. financial institutions that they would undoubtedly unwind, to the further detriment of the U.S. economy,” Lott promised in 2016, according to Politico.

The Foreign Agents Registration Act, which dates back to 1938, requires U.S.-based public relations firms to make public disclosures if they are funded by foreign nations and promote political propaganda about those nations.