President Donald Trump on Tuesday said that “people would revolt” if Democrats impeach him.

The president’s comments came during a sit-down Oval Office interview with Reuters on the same day as a contentious White House meeting with Democratic leaders Nancy Pelosi and Chuck Schumer over the issue of border security.

“It’s hard to impeach somebody who hasn’t done anything wrong and who’s created the greatest economy in the history of our country,” said Trump, responding to those who say payments made through his then-attorney, Michael Cohen, to women with whom he allegedly had relationships with could amount to the “high crimes and misdemeanors” Constitutionally required to remove a president from office. 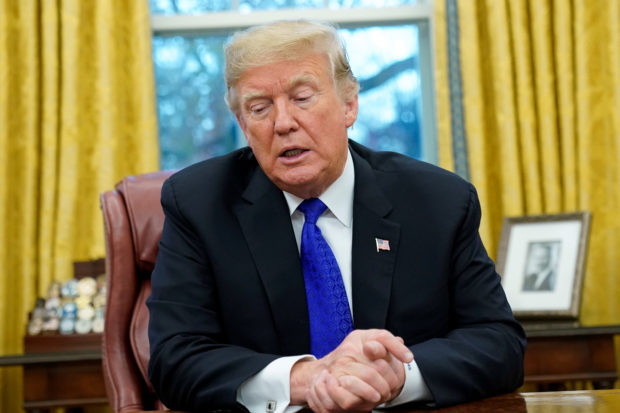 U.S. President Donald Trump sits for an exclusive interview with Reuters journalists in the Oval Office at the White House in Washington, U.S. December 11, 2018. REUTERS/Jonathan Ernst

“I’m not concerned, no. I think that the people would revolt if that happened,” Trump said before listing several key accomplishments, including judges, regulatory cuts, the Supreme Court, and the economy. (RELATED: Pelosi, Schumer Ask Trump To Take Talks Away From Cameras — Trump Refuses)

Pres Trump on prospect of impeachment: “I’m not concerned, no. I think that the people would revolt if that happened. What I’ve done is tax cuts, Supreme Court justices, close to a hundred judges, regulation cuts, and created the greatest economy in the history of our country.”

Trump has to this point denied having affairs with the two women, Karen McDougal and Stormy Daniels, but has admitted to repaying the hush money to Cohen, who has since pleaded guilty to campaign finance violations in addition to lying to Congress and tax evasion. Democrats who view the transactions as campaign finance violations have seized upon the issue and used it against the president.