The UN’s top official is pleading with China and other nations connected to the Paris climate accord to craft rules reducing global greenhouse gas emissions. His intervention comes as climate talks are breaking down.

His pleas took on a desperate tone. “We’re running out of time,” Guterres told officials at climate talks in Katowice, Poland, an area famous for its coal production. “To waste this opportunity would compromise our last best chance to stop runaway climate change. It would not only be immoral, it would be suicidal.”

The talks are centered around hammering out a rulebook for implementing the 2015 Paris agreement, but progress is grinding to a snail pace, especially as countries like US, Russia, Saudi Arabia and Kuwait criticize recent climate reports.

Guterres criticized the U.S. and other nations he thinks are holding up progress and rejecting climate science.

“The IPCC special report is a stark acknowledgment of what the consequences of global warming beyond 1.5 degrees will mean for billions of people around the world, especially those who call small island states home,” he told delegates at the summit Tuesday. “This is not good news, but we cannot afford to ignore it.”

Frank Bainimarama, the prime minister of Fiji, mirrored Guterres’s message. Many countries risk being portrayed as “the generation that blew it – that sacrificed the health of our world and ultimately betrayed humanity because we didn’t have the courage and foresight to go beyond our short-term individual concerns: craven, irresponsible and selfish.” 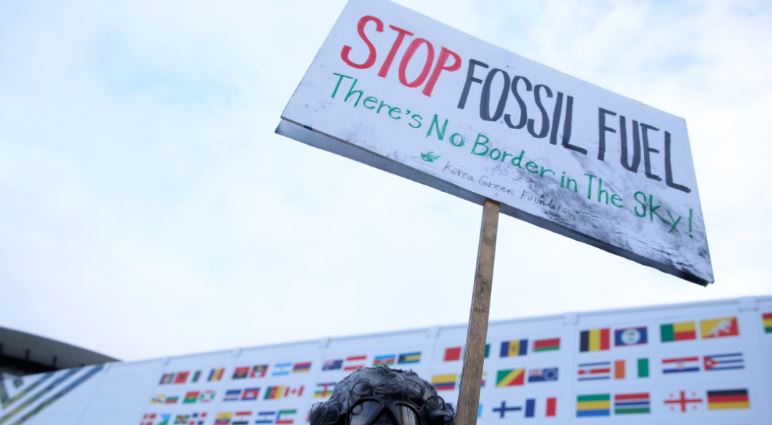 Environmental activist protests against fossil fuel in front of the the venue of the COP24 UN Climate Change Conference 2018 in Katowice, Poland December 10, 2018. Agencja Gazeta/Grzegorz Celejewski via REUTERS

Their critiques come after recent reports suggest the U.S. is deliberately torpedoing the talks. (RELATED: Trump Responds To Dire Predictions In The Latest Climate Report)

“It pains me deeply to have watched the people of the United States and other developed countries across the globe suffering the devastating impacts of climate-induced tragedies, while their professional negotiators are here at COP24 putting red lines through any mention of loss and damage in the Paris guidelines,” Vanuatu foreign minister Ralph Regenvanu said in a speech to the delegates.

President Donald Trump, meanwhile, is using the platform at the summit to illustrate the importance of pushing cleaner forms of fossil fuels. The president announced his decision in 2017 to pull the U.S. out of the Paris agreement, calling the non-binding agreement harmful to the U.S. economy.

Media and activists have expressed concern about Trump’s energy agenda, particularly his reticent to accept government-created climate reports. The Trump administration released the NCA Friday, launching a wave of media coverage on the report’s dire predictions.