Saying it was unusual is an understatement. Pelosi And Schumer were at the White House meeting with the president to discuss attempts to avoid a government shutdown. It turned into a “battle royale” in full view of the media.

Presumptive Speaker, House Minority Leader Nancy Pelosi (D-CA) and US President Donald Trump argue while making statements to the press before a meeting at the White House December 11, 2018 in Washington, DC. (Photo by Brendan Smialowski / AFP)

It was clear from the start that the Democratic leaders were not expecting to start their discussion in front of cameras, as they immediately defaulted to their talking points. For his part, Trump gave no ground, insisting on $5 billion to build portions of the border wall he promised during his campaign. In the end, the idea of a government shutdown to secure the border was fully embraced by the president. We have all the audio.

A new poll from liberal group MoveOn revealed the most popular choice for the Democratic Party’s nomination for president in 2020. While the “winner” has been reported as Robert “Beto” O’Rourke, the real leader, by more than 12 points, was “someone else.” Beto got 15.6 percent, someone else got 28.8 percent. They have a long way to go before they solidify, if they ever do, behind anyone. 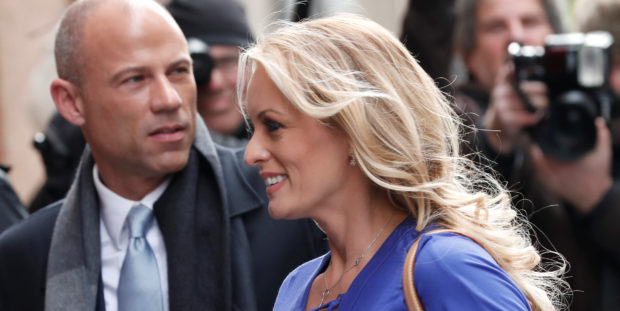 Stormy Daniels likely gagged on the news that she’s been ordered to pay the president’s lawyers almost $300,000. And not much can make her gag.

Finally, Time magazine announced its “Person of the Year” and it was a complete cop-out. It was essentially a big pat on the backs of journalists, because no profession loves itself like journalists love themselves.

Help spread the word about The Daily Daily Caller Podcast. Please take a minute to rate and review on iTunes, share on social media, and be sure to subscribe so you never miss an episode:

Derek Hunter is a columnist and contributing editor for The Daily Caller and author of “Outrage, INC: How the Liberal Mob Ruined Science, Journalism, and Hollywood” from HarperCollins, available now. Pick Up a copy, or several copies, here. Send compliments and complaints to derek@dailycaller.com or follow him on Twitter at @derekahunter