“The United States Senate is no longer the world’s greatest deliberative body. I’d be lying if I didn’t say I was worried about the place … It puts the fun in dysfunctional,” she said during a surprisingly candid speech. McCaskill lost her re-election bid in November to sitting Attorney General Josh Hawley.

“We have too many embarrassing uncles in the United States Senate,” she lamented. “Lots of embarrassing stuff.” She made similar comments in a series of tweets on Dec. 5, suggesting that Republican Senate Majority Leader Mitch McConnell is largely responsible for the state of the Senate.

“The United States Senate is no longer the world’s greatest deliberative body, and everybody needs to quit saying it, until we recover from this period of polarization and the fear of the political consequences of tough votes,” Sen. McCaskill says. pic.twitter.com/LItaPMTeon

Her re-election campaign suffered from bouts of fits and starts. McCaskill raised more than a few eyebrows during the race, especially after she aired a radio ad in late-October that described herself as “not one of those crazy Democrats.”

McCaskill described Missouri Democratic state Sen. Maria Chappelle-Nadal as an example of one such Democrat. Chappelle-Nadal sparked outrage in 2017 after calling for President Donald Trump’s assassination.

One of the reasons for her defeat was an inability to cobble together enough support from Missouri’s black supporters. One Missouri Democrat told reporters in October that McCaskill’s issues with black voters represent a “life-threatening situation.” Another Missouri activist believed McCaskill simply had not paid enough attention to Missouri’s black population. 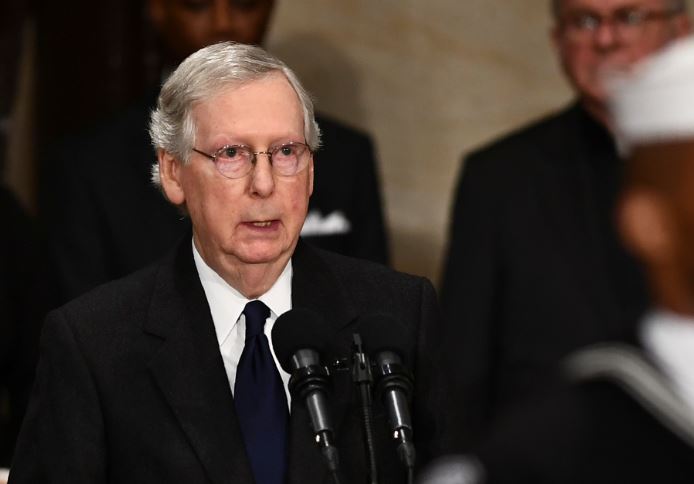 US Senator Mitch McConnell (R-KY) speaks as the late former President George H.W. Bush lies in state inside the Rotunda of the US Capitol, December 3, 2018 in Washington, DC. Brendan Smialowski/Pool via REUTERS

The lack of support in Missouri’s urban areas prompted McCaskill to take deliberate steps at appealing to rural voters, many of whom are Republicans. (RELATED: Jeff Flake Leaves The Senate Warning That America Is ‘By No Means Immune’ To Tyranny)

Her farewell address coincided with Arizona Sen. Jeff Flake’s final speech to the Senate. The outgoing Republican senator warned Americans that no country is resistant from being overtaken by a tyrannical government.

“Let us recognize from this place here today that the shadow of tyranny is once again enveloping parts of the globe,” Flake, a prominent Trump critic, said on the Senate floor. “And let us recognize as authoritarianism reasserts itself in country after country that we are by no means immune.”