“The worst thing that happens in DC is when you start a conversation with someone and they expect you to know who they are and they never even tell you their name.”

He works for CRTV.com. He formerly worked for Fox News.

Just spent some quality time in the Oval Office with @realDonaldTrump. Due to time constraints, the on-camera portion of the meeting is re-scheduled for a day soon. #StayTuned! pic.twitter.com/Pk8iBFdLLT

A stern warning about your relationship

“Always be careful about what u say to ur partner, lest u become the subject of a personal essay about ur break up.” — Joanna Rothkopf, deputy editor, Esquire.

Why David Bossie might not get that White House COS job

“Would be surprising as Bossie has a tendency to annoy Trump. Towards the end of the campaign, he wasn’t allowed on the campaign plane because he drove Trump nuts.” — Yashar Ali, HuffPost, New York Mag.

“It’s 5 pm and you need to change a cable news chyron after a brutal news day. You look up, you tell aides to send a statement to a news outlet about your chief-of-staff race.” — Maggie Haberman, NYT.

Blake Hounshell, EIC, Politico Mag: “Sarah Sanders says she hopes her legacy will be that she has tried to be “transparent and honest” every day #WomenRuleSummit.”

.@GettyImages came by to take some photos and @davidmackau and I posed this ~traditional newsroom look~ anddddddddd well they published it pic.twitter.com/u8BCP5aVEV

Coming up with a nickname for Chuck and Nancy

Glenn Beck is angry about my story about his charitable bragging

You can read my piece here.

Damn Betsy a new low! I will send you all of the mail from those around the country who were inspired to give from this, just as I was inspired by Tyler Perry. I bless TP for not being secret. Imagine what he or others must do privately as well. https://t.co/HDPuolHtoY

Joaquin Castro has a twin brother who could be helpful

Ed O’Keefe: “In a crowded field, Castro said he will focus on a ‘track record of getting things done at the local and the federal level.’ His brother, @JoaquinCastrotx, expected to play a prominent role in the campaign.”

Dave Weigel: “I don’t think the potential hilarity of a president having a twin bother has been explored enough.” 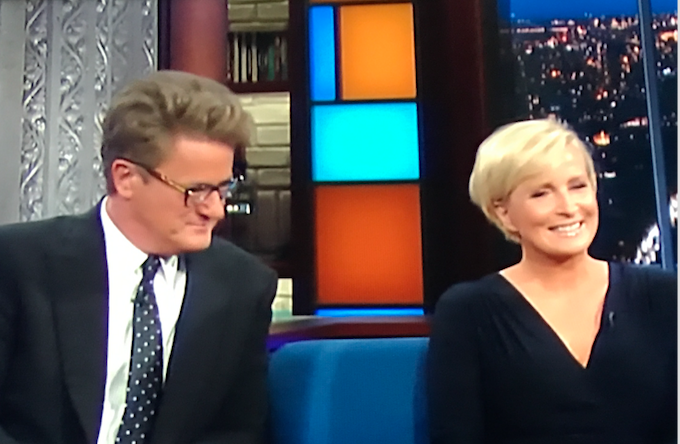 The backstory: Read about what happened here.

G.E. Anderson, photographer, writer: “@morningmika just asked if Mike Pompeo is a ‘wannabe dictator’s butt boy,’ as homophobic a term as I’ve heard on national morning television.  @MSNBC tried and failed to censor it, and did not transcribe her remark in the closed captioning. #journalism.”

Donald Trump Jr.: “This is disgusting! How can @KevinHart4real essentially be forced to lose his Oscar’s gig for comments he made years ago as a comedian, but Mika can make a seriously homophobic slur on a major news station, have the network try to cover it up & its not an issue? Give me a break!”

Read a bunch of other reactions here, including NPR’s David Folkenflik, who say Mika will have to do more than a “Twitterpology.”

“I mean I disagree with what Mika is getting at but I don’t think it’s “homophobic” to call someone a butt boy. It’s like saying lapdog or poodle, but funnier. I hope we conservatives don’t get all precious and squeamish about this stuff.” — Raheem Kassam, former Breitbart News reporter.

Mika was a no-show Thursday morning on ‘Morning Joe’

“Mika Brzezinski was not on Morning Joe this morning due to ‘a long-planned family event.'” — The Washington Examiner.

“Whenever you get down, just remember you never have to wake up and be @AnnCoulter.” — Andy Lassner, executive producer, The Ellen Show.

The Hollywood Reporter: Marc Lamont Hill is “profoundly ok” since being canned from CNN. Here.

“Yes, in case you were wondering, the fact that the national enquirer guy is named ‘pecker’ is definitely the glitching simulation at work. we’re all dead, all life is a simulation. remain indoors.” — Oliver Willis, senior writer, Shareblue.

“I’d like to confess that I think Ocasio-Cortez is living rent-free in a lot of conservatives’ heads. I see no reason to dwell on all her tweets, etc. And the complaining and responding have gotten to be so constant that both get tuned out.” — Erick Erickson, editor of The Resurgent.

“Hey little buddy @realDonaldTrump u need a bash brother for Chief if Staff. Got a secret reorg plan already. Also worried about you looking more like a Twinkie everyday [sic]. I will buff you up daily workouts. DM me. #yeswecanseco.” — Jose Canseco.