Former President Barack Obama used a Saturday Facebook post to remind people to enroll in the Affordable Care Act as well as respond to a federal judge’s ruling in Texas that said a key provision of the law is unconstitutional.

“Individual Mandate can no longer be fairly read as an exercise of Congress’s Tax Power and is still impermissible under the Interstate Commerce Clause — meaning the Individual Mandate is unconstitutional,” wrote District Judge Reed O’Connor in his opinion ruling that the individual mandate is “essential to and inseverable from the remainder of the ACA.”

The law will remain in effect, at least for now — something that the former president was quick to point out, along with the fact that appeals to the ruling will “take months, if not years.” (RELATED: Barack Obama Responds Multiple Times To Hecklers During Florida Rally) 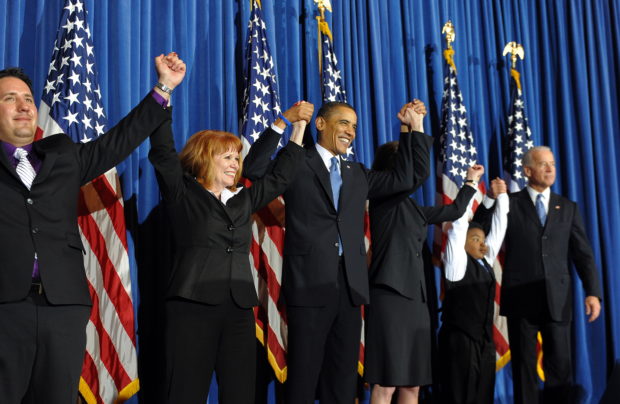 US President Barack Obama (C) celebrates with lawmakers after holding a rally celebrating the passage and signing into law of the Patient Protection and Affordable Care Act health insurance reform bill, at the Interior Department in Washington, DC, on March 23, 2010. (JEWEL SAMAD/AFP/Getty Images)

Citing “two things you need to know” about healthcare, Obama began his post by reminding readers that open enrollment ends “today.” He then lit into the court decision itself.

Second, you might have heard about a federal court decision on a Republican lawsuit trying to strike down the Affordable Care Act in its entirety. That can be a scary thing to hear, particularly if you or someone you care about has a pre-existing condition. And that’s why it’s so important for you to know that last night’s ruling changes nothing for now. As this decision makes its way through the courts, which will take months, if not years, the law remains in place and will likely stay that way. Open enrollment is proceeding as planned today. And a good way to show that you’re tired of people trying to take away your health care is to go get covered!

Obama listed several things he views as hallmarks of the law, such as preventive care and the fact that “young people can stay on their parents’ plans until they’re 26,” then ended with a call to defeat Republicans “trying to undo all that.”

But all of this should also be a reminder that Republicans will never stop trying to undo all that. If they can’t get it done in Congress, they’ll keep trying in the courts, even when it puts people’s pre-existing conditions coverage at risk. The only way to convince them to stop trying to repeal this law, and start working to make health care better, is to keep voting, in big numbers, in every election, for people who’ll protect and improve our care.