A planned reduction in U.S. forces in Afghanistan ordered by President Donald Trump could bring troop levels to the lowest point since the start of the 17-year Afghan war.

More than 7,000 U.S. troops, or around half of the 14,000 currently in the country, are set to come home from Afghanistan over the next several weeks, according to a Wall Street Journal report published Thursday. The announcement came just one day after President Trump announced a military withdrawal from Syria.

The move is the “first stage of a phased drawdown and the start of a conclusion to the 17-year war that officials say could take at least many months,” The Wall Street Journal reported. 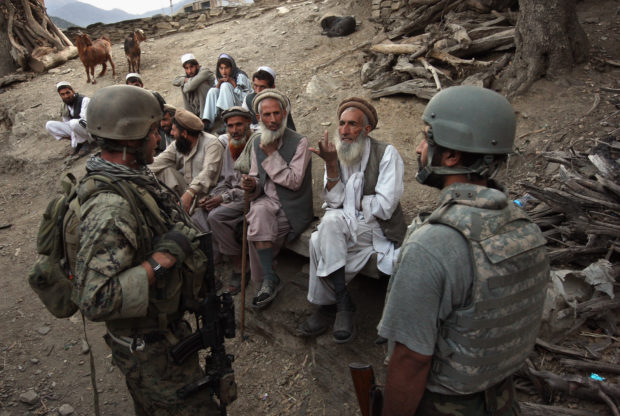 KORENGAL VALLEY, AFGHANISTAN – OCTOBER 25: Village elders speak with a U.S. Marine (L), through an interpreter as American and Afghan forces search for weapons October 25, 2008 in the Korengal Valley of Kunar Province in eastern Afghanistan. (Photo by John Moore/Getty Images)

“I think it shows how serious the president is about wanting to come out of conflicts,” said a senior U.S. official, speaking of the president’s mindset regarding troop reductions in both places. “I think he wants to see viable options about how to bring conflicts to a close.”

While the president made non-intervention a key part of his platform in 2016, many who would ordinarily be on his side have expressed opposition to his decision on this issue, notably including outgoing Secretary of Defense James Mattis and Republican Sen. Lindsey Graham of South Carolina. (RELATED: Trump Doesn’t Hold Back In Response To Graham’s Criticism Over Syria Withdrawal)

“This president got elected to get our foreign policy back on the right track after years of being adrift,” Miller told CNN host Wolf Blitzer. “One foreign policy blunder after another in Iraq and Afghanistan and Libya hasn’t worked out for our national interest.”

“Wolf, when did the American people sign up to be in every war in every place in every side of every conflict all over planet earth?” he asked.