Newsweek reported on Sunday that conservatives, in particular, were riled up about NBA superstar LeBron James quoting an anti-Semitic rap lyric in a social media post.

On Saturday, James, a three-time NBA champion, posted a photo on his Instagram story with the caption, “We been getting that Jewish money, Everything is Kosher.”

Surprised LeBron, who makes very few mistakes, put this out. Does quoting lyrics from a song absolve the person quoting from the responsibility behind the words? I’d argue no, especially with a following of 45 million. pic.twitter.com/efv9gkXres 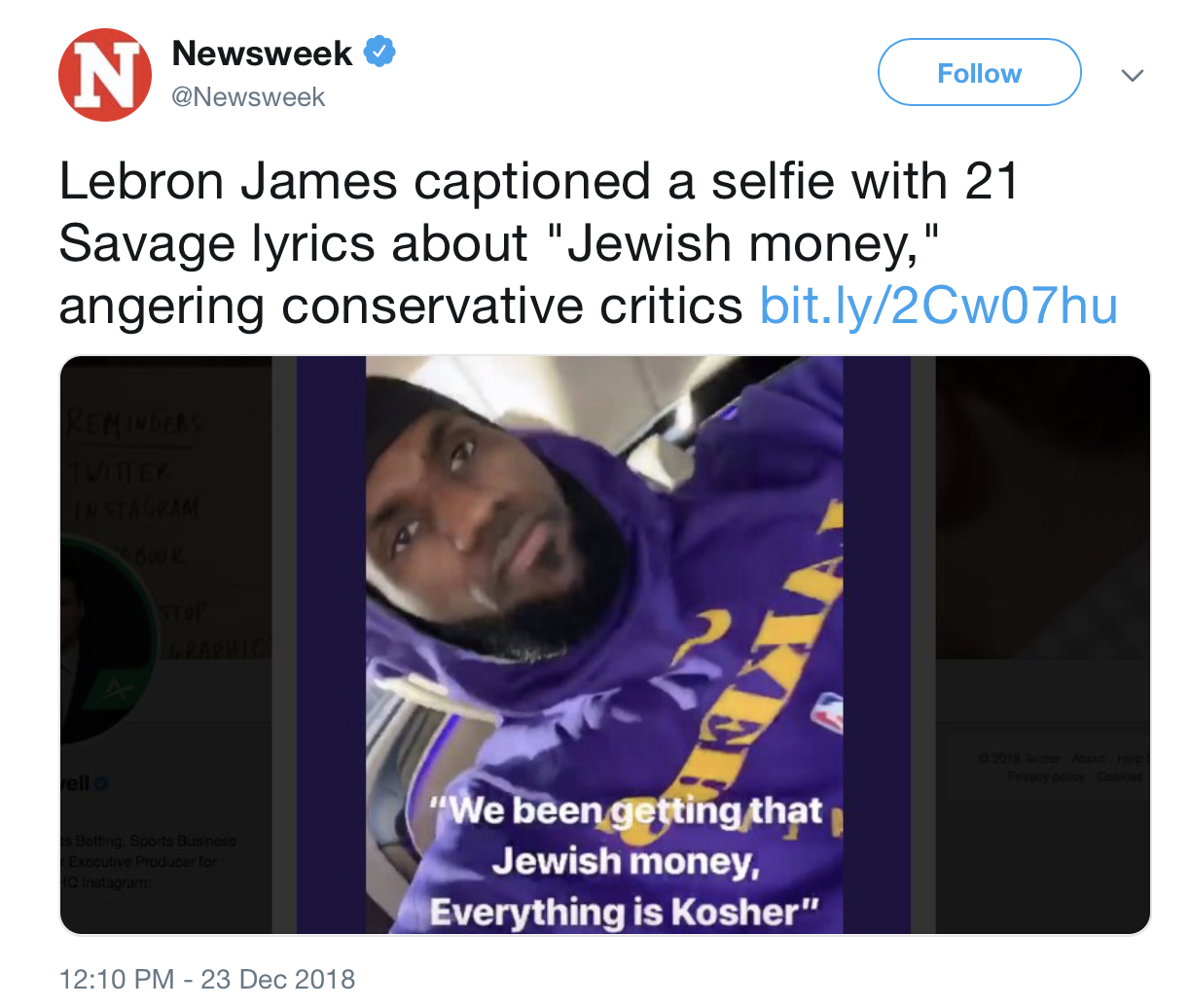 Newsweek tweeted a link to their story about LeBron James quoting an anti-Semitic rap lyric.

The only line in the story about “conservatives” reads, “Sports reporters and conservative critics pounced on the social media post just days after the NBA superstar stirred controversy by saying the ‘old white men’ NFL team owners embrace a ‘slave mentality’ to keep control of their players.”

The article fails to mention any conservative by name who was upset by James’s post.

However, the only person it did reference was sports business reporter Darren Rovell, who screenshotted the NBA player’s story.

Rovell posted multiple tweets condemning and explaining why he thought the lyrics James tweeted were anti-Semitic.

Yesterday, I saw that LeBron James posted this on Instagram. He was quoting lyrics from @21savage. “Getting that Jewish money” might be seen as a compliment, as in Jews disproportionate to their population (1.4% of the US), on average, have a significant place among the nation’s most wealthy individuals. The issue is that “Jewish money” is actually a derogatory term that, throughout the history of the Jews, has led to hate. It contributed to hate by the Nazis and along with the long nose in cartoons, it contributed to a stereotype that Jews would do anything for money. I spent all day yesterday battling people on Twitter about why the lyrics were not OK and why quoting the lyrics didn’t absolve LeBron from responsibility. As I expected, last night LeBron told @davemcten he was apologizing if he offended anyone. It was an uphill battle yesterday, but LeBron knows simply acknowledging a mistake goes a long way into helping people understand the other side of “the coin.”

Rovell tweeted, “Jews make up 1.4 percent of the US population, so I expect people to not understand why saying ‘getting that Jewish money’ is offensive. That Jews are disproportionately wealthy to their population does not take away from the fact that the term ‘Jewish $’ means Jews are ALL ABOUT $.” (RELATED: LeBron James Makes Insane Claim About NFL Owners And Slavery. Here’s What He Said)

James, for his part, apologized after Sunday night’s loss to the Grizzlies saying, “Apologies, for sure, if I offended anyone. That’s not why I chose to share that lyric. I always [post lyrics]. That’s what I do. I ride in my car, I listen to great music, and that was the byproduct of it. So I actually thought it was a compliment, and obviously, it wasn’t through the lens of a lot of people. My apologies. It definitely was not the intent, obviously, to hurt anybody,” according to ESPN.