The final “Sunday Night Football” game on NBC showed a 40 percent increase in viewership versus the same time in 2017.

The showdown out west for the Seattle Seahawks’ 38-31 win over Patrick Mahomes-lead Kansas City Chiefs scored a 12.6 household rating in metered markets, with a 4.2 rating in the coveted demographic of adults ages 18-49, according to the Hollywood Reporter Monday.  (RELATED: Here Are The Best Moments Of Week 14 Of The NFL Season) 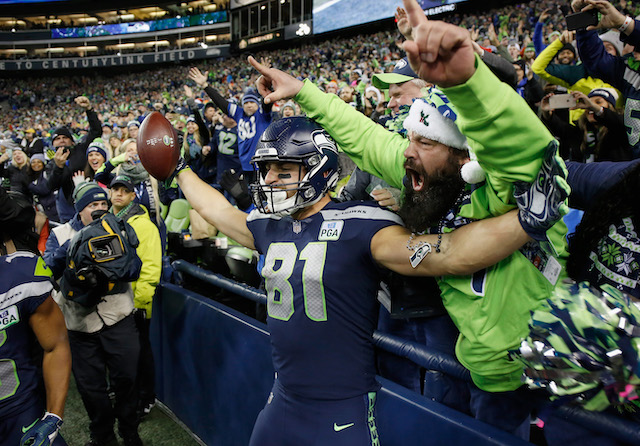 Seattle Seahawks during the second quarter of the game at CenturyLink Field on December 23, 2018 in Seattle, Washington. (Photo by Otto Greule Jr/Getty Images)

The Sunday night battle was not only up compared to last year, but it was the 13th time this season that “SNF” bested the “Sunday Night Football” games from 2017. And the Chiefs-Seahawks shootout earned the best “SNF” rating seen since 2014. (RELATED: Here Are The Best Moments From Week 15 Of The NFL Season)

The game Saturday night for the Baltimore Ravens 22-10 victory against the Los Angeles Chargers scored well too, with a 9.0 rating.

Overall the 2018-2019 season “SNF” games are up six percent in viewership compared to last year and just one more example that the struggles the NFL faced last season — with lower ratings amid the national anthem protests — appear to be behind the league. And that’s good news for all of us football fans.