LOUNGING ON A GRAY SOFA IN D.C.— It’s the final episode of the year. And host Brian Stelter has a big show — Blond Pulitzer Prize winner Ronan Farrow is here to talk about his bombshell sexual harassment and assault stories. Along with him are NYT‘s business reporter Rachel Abrams and New York Mag’s Irin Carmon.

First things first. Whoever is running CNN’s chyron during “Reliable Sources” has sex on the brain.

“MEDIA SHAKUPS [sic] AND TAKEDOWNS IN A DIZZYING 2018,” blares one of the first chyrons of the program.

Stelter did say “shakeups,” so it wasn’t a total disaster.

The show is more or less a year in review. He quickly gets in a dig at Fox News, saying it was hard to know “where Fox ends and the White House begins.”

The chyron has been fixed (deep sigh of relief).

The Committee To Protect Journalists’s Board Chair Kathleen Carroll, AP‘s Sally Buzbee and WSJ‘s Matt Murray are on the first all-star panel.

Stelter’s obvious question for Murray: What’s it like taking over the WSJ?

The relatively new editor-in-chief, says, “It’s like getting on a tiger and you ride … It’s been intense from the moment we started and that’s just the world we’re living in today.”

Carroll wears a hideous black frock with what appears to be giant, colorful plastic donut shapes sewn to the sides. Is this the residue of an Octopus attack? Her hair is sticking straight up. I have no idea how I am supposed to listen to what she’s saying, but fine, rewind.

“In fact, the journalists who are being killed now are being murdered. It’s retaliatory killing,” she says, her voice sounding like Julia Childs describing how to prepare Boef Bourguignon.

In the next segment, Stelter moves onto media winners and losers — his coworker Chris Cuomo is a big winner with the highest rated show on CNN. Good for him. Other winners he mentioned were The New York Times, where Stelter worked previously, and the WSJ.

“I would say David Pecker at The National Enquirer is a loser this year,” Stelter says, adding that Sinclair is another loser for having a conservative, biased bent. “And perhaps the biggest loser of the year … Facebook — “the plague of misinformation on the platform,” he says.

The Baltimore Sun‘s ever irritating media critic David Zurawik is here in red-framed glasses, a bald head and a skinny burgundy tie.

“Not that I am agreeing with the host, but I really love-hahaha-the newspapers you picked,” Zurawik says, buttering up Stelter. “… AND … THEY’VE DONE GREAT WORK. THEY’VE DONE MONUMENTAL WORK I THINK … AT THIS MOMENT WHEN DEMOCRACY IS IMPERILED OUT OF THE EXECUTIVE BRANCH OF OUR GOVERNMENT.”

Losers for Zurawik: “Network television … You name one show besides ‘This is Us’ that anyone cares about?” he asks rhetorically. Of course, if you read Stelter’s annoying late-night newsletter, you already know he’s a big “This is Us” watcher. More ass kissing. Thanks Zurawik.

Another loser for these two: InfoWars‘s Alex Jones. Stelter explains that he  has been “de-platformed.” “YES!” Zurawik yells in his best inside voice in agreement.

And still, one more loser for these two: Actress Roseanne Barr.

“NO SYMPATHY FOR ROSEANNE!” shouts Zurawik, adding that he likes the concept of a working class drama minus Roseanne.

“THANK YOU BRIAN!” he says voluminously, shaking the host’s hand.

This is the second year of #MeToo and Farrow is on the show to discuss. 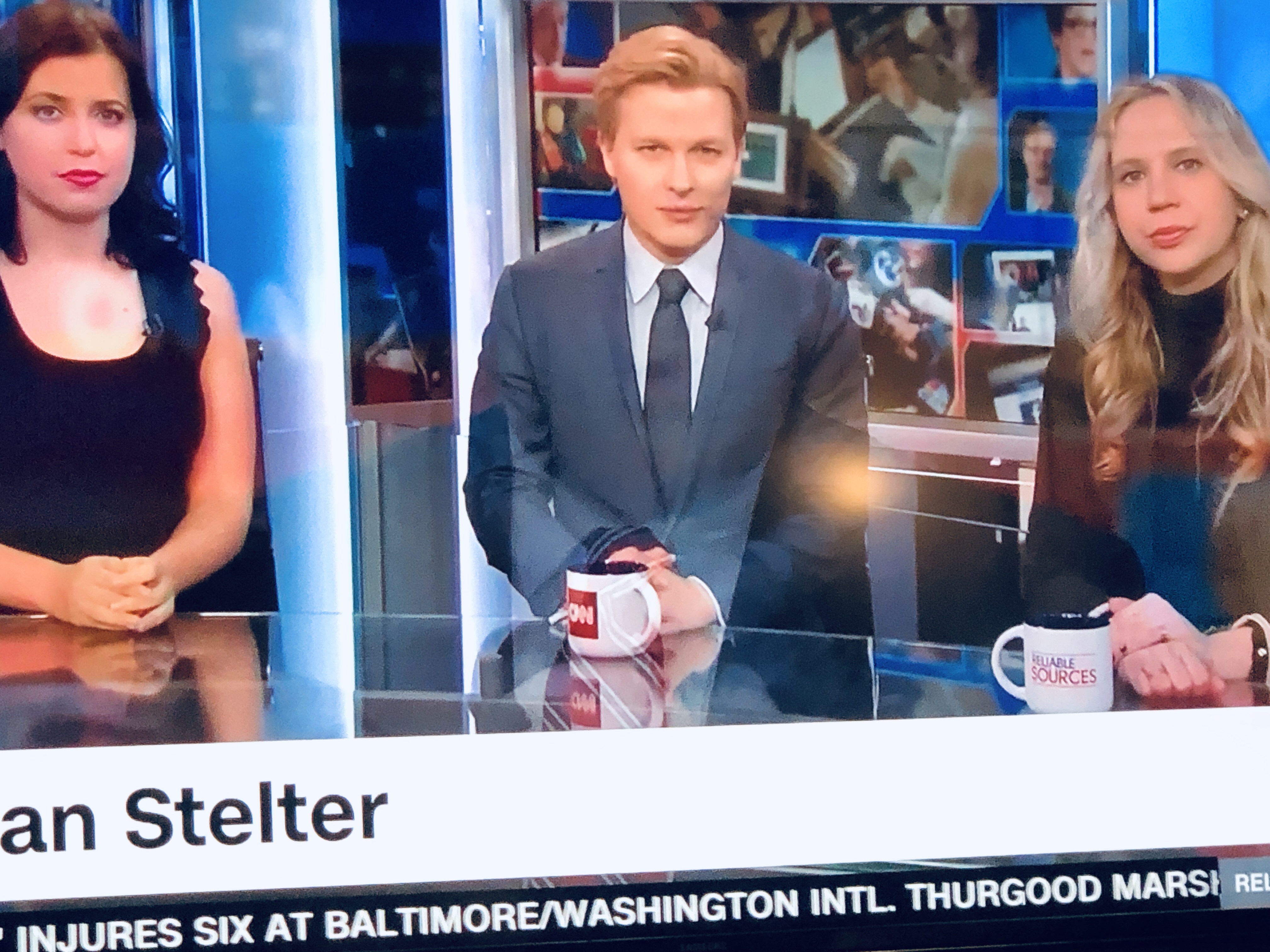 Stelter asks what it’s like to be in the spotlight.

“You know, it’s a double-edged sword, I would say largely it’s a real advantage because more people talk to you,” Farrow says in the best segment of today’s program. This is actually good stuff. “Some people immediately hang up on you because of that reputation.”

Farrow says this was not about Harvey Weinstein. Or Hollywood. “This was about systems deployed by very powerful, very wealthy people to suppress these kinds of allegations against them,” he says.

Abrams explains sourcing on these stories was hard. “I think probably the hardest thing is getting people to trust you and open up,” she says, such as women who told her they’d moved past this and angrily wanted to know why they were being asked to talk about it.

Carmon asks, “How do you rebuild a culture that doesn’t enable that?”

The subject of Supreme Court Justice Brett Kavanaugh comes up. Farrow blames Congress for fucking the whole story up. “All of this went into a cauldron of mistrust … the fact patterns themselves were compelling and important and deserved to be heard,” said Farrow, who broke the initial story on Christine Blasey Ford, the woman who testified before Congress that Kavanaugh sexually assaulted her back in high school.

Stelter asks Farrow if there were other women with allegations against Kavanaugh.

“Beyond what we reported, more opportunities for reporting were foreclosed,” he says.

No show with Stelter as host would be complete without some hatred for President Donald Trump.

Stelter says Trump is leading a hate movement against the media.

“He is not our customer, you are. We need to keep serving you,” he says, sounding a Burger King counter man. “For example, calling a lie a lie.”

UPenn Annenberg’s Kathleen Hall Jamieson says she doesn’t like the media calling the president a liar: “I don’t like it because we don’t know intention,” she says sounding like a real journalist.

Stelter asks the tough as nails expert about the phrase “fake news.” She says, “We should consider fake news an oxymoron. If something is fake, it’s not news.”

She also raises the issue of “viral deception.” Or, VD. “I want people to say ‘Ew, I don’t catch it, I don’t want to spread it, if it comes anywhere near me I want to quarantine it,” she says.

It seems only fitting Stelter winds down his last show of the year with VD.

The final segment yanks the all-star panel back to discuss New Year’s resolutions.

“My resolution is for more White House briefings,” Stelter says.

The last segment of the show is not about Stelter’s neediness but is actually sad. It’s yet another farewell to CNN’s Anthony Bourdain, who committed suicide earlier in the year.

Final bald count for this episode of “We Watch So You Don’t Have To”: Three balding men, five women and two men with hair, if you include Bourdain.