The country’s manufacturing purchasing managers index (PMI) stumbled to 49.4 in December from 50.0 a month before, The Wall Street Journal reported Monday. Any PMI below 50 is considered an economic contraction. The low number also comes as U.S. trade officials  work to keep Trump from wavering on his protectionist policies.

The meager growth is an indicator that China’s economy is struggling with anemic demand at home and the effects of a protracted trade fight with the U.S. “Downward pressure of market demand further increased as companies’ expectations became more cautious,” Zhao Qinghe, an economist with China’s statistics bureau, told reporters Monday.

China is doing everything it can to forestall the downturn, according to some media reports. Chinese leaders are pledging more tax cuts while easing off a campaign to hold back galloping debt that was a top priority the past two years. Lawmakers are also allowing local governments to issue bonds to help boost employment and stimulus.

“Bob’s attitude toward China is very simple. He wants them to surrender,” William Reinsch, a former federal trade official who met him three decades ago when Lighthizer was a congressional aide. “His negotiating strategy is simple too. He basically gives them a list of things he wants them to do and says, ‘Fix it now.’” 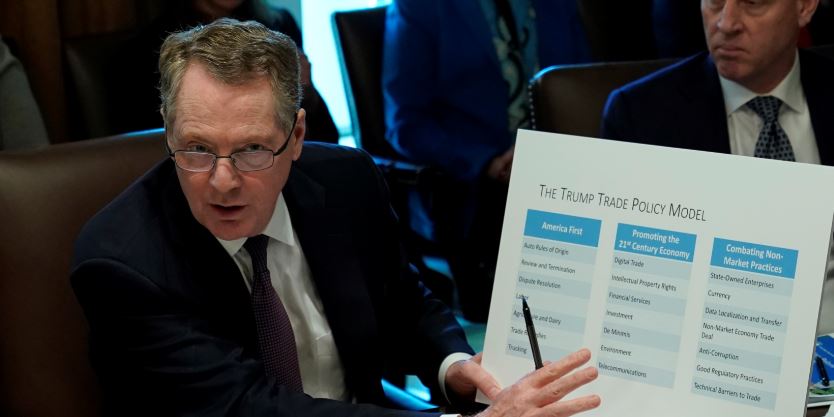 Trump has worked the past few months to turn the screws on Chinese President Xi Jinping. The administration slapped stiff tariffs on $250 billion worth of Chinese products, among a slew of other strong-arm tactics; China returned fire with strategic tariffs of its own. Xi and Trump eventually agreed to a 90-day truce in December and to work toward an agreement.

Lighthizer wants to force China to end practices requiring U.S. companies to hand over valuable technology as a condition of doing business. But he believes Beijing should not be trusted and warned Trump that he might need to exert more pressure to win any major concessions. Some economic experts believe he is flipping on trade.

“It’s not some subtle shift; Trump has flipped since September,” Derek Scissors, who studies China’s economy for the American Enterprise Institute, told reporters. “He went from saying how he was going to slap tariffs on everything to all this talk about making the greatest deal ever.”

Lighthizer, meanwhile, dismisses any idea that he and Trump are at loggerheads on trade. Never the less, the 71-year-old trade expert has told friends and associates that he is intent on preventing Trump from being talked into accepting “empty promises.”