—Kanye West in another WTF moment.

TWINS! “We are having a girl and a boy.” —Abby Huntsman on ABC’s “The View” on announcing her pregnancy. Co-worker Meghan McCain remarked, “You’re getting two out at once! …I’m so happy for you.” Upon asking for advice, Whoopi Goldberg informed her she has two breasts.

“New Year’s question…do I continue responding to the ignorant and uniformed with 123 followers thereby increasing exposure for the troll or should I just block them all and deny myself the joy of shutting them up with a fact or 2?” —Ellen Barkin, actress.

“How dare you @politico? I am not endorsing anyone for a long time but you make me want to get into @ewarren’s corner fast. This is so offensive.” —Joan Walsh.

Politico: “How does Elizabeth Warren avoid a Clinton redux — written off as too unlikable before her campaign gets off the ground? Here.

Congressman warns CNN’s Andy and Anderson to not disappoint him

“When you have 2 kids under 2, you spend your #NewYearsEve  with @andersoncooper & @Andy (and of course cameos by @denlemon and the gang) on @CNN. Please don’t disappoint. And please get the good stuff in before 10. Zzzzzz.” —Rep. Eric Swalwell (D-Calif.).

Best Bio of the Day:

“My tweets are mostly about hell and despair and do not reflect the views of my employer, The Washington Post.”

“I have a bunch of general mutes turned on in the Twitter app so that I don’t see most of my replies in the notifications tab but I’m visiting my mom and she apparently reads every single reply I get and has spent the last week asking me variations of ‘what’s it like being hated.'” — Ben Dreyfuss, editorial director, Mother Jones.

“CLARIFICATION-this wasn’t a compliment. My point is that perhaps 2019 will warrant a closer look at what characteristics must exhibited to be selected our most prized ‘wins’ Lying endlessly & attacking baselessly has not stood in the way of holding the highest office in the land.”

Daily Mail: They’re piling up. Kim Kardashian is having another child by a surrogate. It’s a boy. Here.

“Even if I didn’t work at @CNN watching @andersoncooper and @Andy is the only way I would spend NYE. You never know what’s gonna happen except that it’s gonna be nuts.” —Brianna Keilar, CNN.

James Woods: Men in 2019. (Linked to a video of Andy and Anderson doing shots on New Year’s Eve.)

“On balance, his conduct over the past two years, particularly his actions this month, is evidence that the president has not risen to the mantle of the office. …Trump’s words and actions have caused dismay around the world.” —Mitt Romney in an op-ed in WaPo. 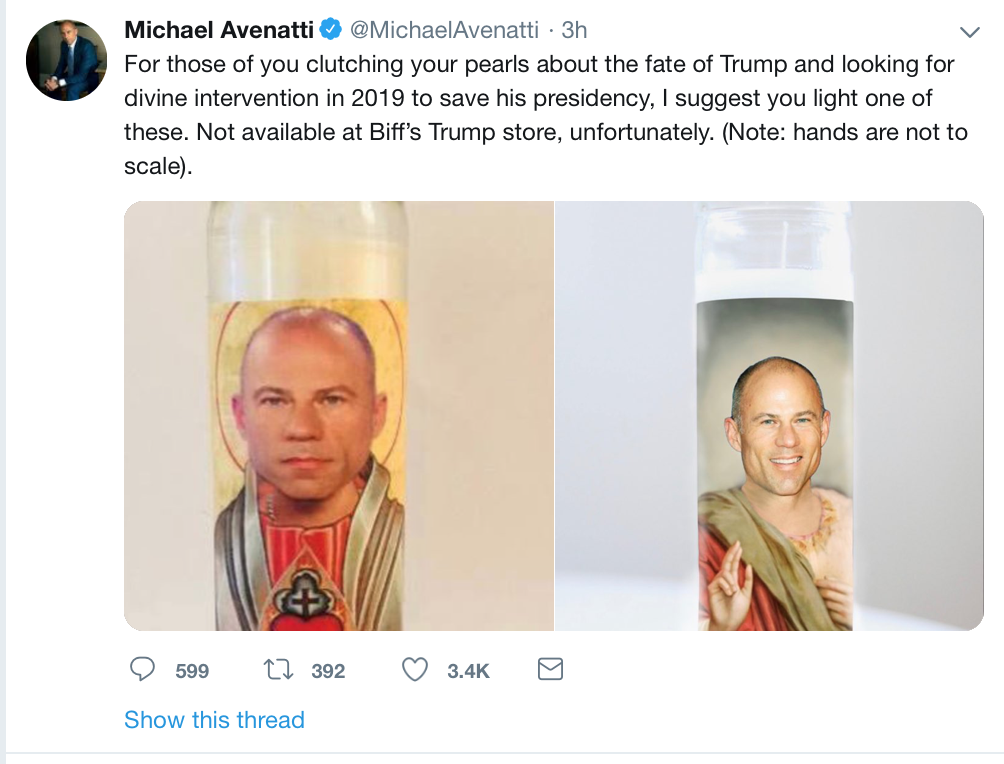 Kanye West is back on the pro-Trump wagon

“One of my favorite of many things about what the Trump hat represents to me is that people can’t tell me what to do because I’m black.” —Kanye West, singer, part-time Trump activist.

“Due to State Dept rules that were changed by the outgoing administration, I have had to clear my personal Twitter account that I have had for years. The followers, the history, the pictures, and all other content. Please refollow and retweet this to your friends. Here’s to 2019!” —Nikki Haley, former U.N. Ambassador.

Last paintings of 2018. I know they suck, but if Jim Carey can post his art, why not the rest of us. Red is inspired by RLauren’s ranch. Orange inspired by sitting bull but ended up, god knows who. pic.twitter.com/Lnlzxr7wWj

Happy new year to everyone, including the haters pic.twitter.com/LgC1HdvZAr

“I remember the days when the WH press team spent their time delivering press briefings rather than briefing the public that the President is physically in the place where he is supposed to do his job.” —Sam Vinograd, CNN national security analyst.

“I wrote a lot of words in 2018, and I had arguably my most successful year as a writer. I also had one of my most unhappy years as a human being. But I did good work on the page, and on myself. And that’s why I will always be thankful for this lovely, terrible year.” —Jamil Hill, reporter, Rolling Stone.

Parkland father says he will never think of 2018 again

“Wishing all strength, peace and health for 2019. As for 2018, a year in which my daughter was murdered, I will never think of you again. I want to say thank you to all for your support this year. As for trolls, my hope is that you learn the definition of decency in 2019.” —Fred Guttenberg, whose daughter died in the Parkland High School shooting.

“I would listen to a podcast exclusively of Anderson Cooper after his third shot of tequila complaining about the people smoking in front of his home. ‘It’s like taking a poop on the street!'”  —Kyle Feldscher, CNN, breaking news.

To be fair, 34K people, including his coworker Griff Jenkins, liked the photo. Backstory: Watters wife, Noelle, filed for divorced in March after Watters hooked up with his FNC producer. According to the New York Daily News, Watters reported his relationship to HR and the producer was moved to The Ingraham Angle. In March, a Fox News spokesperson confirmed this.

“Disappointed in you Jesse.”

“Probably shouldn’t have posted the photos of the woman you cheated with on your beautiful wife… Flaunting does not become you… your poor girls & their Mother who may see this pushed in their faces.. I’ve lost so much respect that you aren’t thinking of their feelings.”

“Wow so disappointed in your behavior. Your flaunting this relationship. Your poor wife and kids.”

“Fame can change you if you let it.”

“It was HIS CHOICE to sleep around on his wife. Why do women always bash the other woman and give the man a pass? And who are you to judge any of this anyway?”