NRA American Rifleman Contributor
January 03, 2019 3:19 PM ET
Font Size:
Best known for custom-grade M1911s, shotguns and AR-style rifles, Wilson Combat, nonetheless saw the need to develop an all-new pistol platform to better serve its customers desiring a compact, high-capacity semi-automatic that was accurate, enjoyable to shoot and as reliable as the polymer-frame service sidearms that are so popular today.

By taking cues from earlier, and somewhat unlikely, firearm designs, and bringing their own experience and expertise to bear, Bill Wilson and his team came up with the EDC X9, a firearm that exhibits quality manufacture, thoughtful ergonomics and the reliability and performance for which Wilson Combat is known.

At first blush, the EDC X9 appears to be a derivative of the M1911, but with the lines of a slightly shorter—in height and length—Commander model. On paper, though, it also bears close resemblance to any of the compact, polymer-frame 9 mm semi-automatics currently in vogue. The single-action, hammer-fired autoloader is portable and concealable, boxing at 5.25″ tall by 7.4″ long, with a 4″ fluted and semi-flared barrel, and weighing in at 30 ozs. with an unloaded magazine. Yet, the gun still makes use of an ample 15-round double-stack magazine, and does so without exceeding 1.35″ in width along the grip (1.4″ at the manual safety)—very close to the typical 1.3″ width of an M1911. Credit for this achievement may be given to one of Wilson’s design inspirations, the Browning BDM—an American-made double-action/single-action (and convertible to double-action-only) semi-automatic with a grip frame that used minimal metallic structure and wraparound stocks. Like the BDM, the EDC X9’s frame is skeletonized in the grip—allowing the most room possible for an efficient 15-round detachable box magazine—and slim, slide-off G10 stock panels keep the gun trim, handy and easy to maintain.

In terms of controls, the EDC X9 dispenses with the M1911’s grip safety, but does retain a manual thumb safety in the expected position—our test sample had a left-side-only safety, but bilateral safeties are optional. A slide stop/release lever is also in its familiar position along the left side of the frame. The lever is enlarged to approximately the same size as the safety to provide more engagement surface. Likewise, the left-side magazine-release button is slightly elongated, making it easier to reach with the shooting hand thumb. The trigger features a solid aluminum body with vertical serrations running along the interior of its mildly curved face. To tailor the fit and feel of custom-order guns, Wilson Combat offers three possible trigger lengths—short, medium and long. Our test sample featured a medium-length trigger with a smooth 3-lb., 9-oz., pull—if the EDC X9 is not a true, custom-grade M1911, nobody bothered to tell the crisp, single-action trigger. 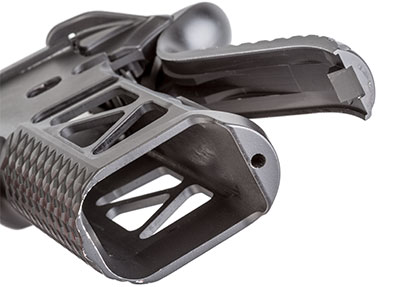 For disassembly beyond removing the slide, a port at the heel of the frame allows a 1/8″ punch to engage the hammer spring housing and unlatch the hinged backstrap. Once open, the G10 stock panels can be removed.

The aluminum X-Frame houses all the controls, and features two pairs of stout guide rails on which the slide reciprocates. The first set is located at the rear, on the hammer block, and measures 0.94″ in length, and the second set is 1.125″ long and sited above the trigger guard—it’s a very robust design. Wilson’s unique X-Tac texturing cuts adorn the frontstrap and the mainspring housing, and a two-slot accessory rail is machined into the dustcover to accept a firearm-mounted light or laser. Wilson Combat also builds EDC X9s without the accessory rail. The magazine well is ample and slightly beveled at the mouth to ease magazine insertion, and the G10 stocks—which feature Wilson’s semi-aggressive starburst pattern and Wilson Combat medallions—are available in black, gray/black, Dirty Olive and Black Cherry color schemes. One other component that can be tailored on the gun’s lower half is the mainspring housing/backstrap. Two sizes, large and small, are available, and Wilson Combat has a sizing chart included within the EDC X9 order form—as an example, a shooter with medium-size hands should order a small backstrap paired with a medium-length trigger.

Moving up to the slide, the steel unit is machined in Wilson’s angular Tri-Top pattern, as opposed to the traditionally rounded M1911 slides. The top end features 30-l.p.i. serrations running lengthwise between a fully adjustable—windage and elevation—U-notch rear and a fiber-optic front sight. To reduce glare, the rear sight and the rear of the slide have both been cut with 40-l.p.i. horizontal serrations. As this is a custom gun, other sighting options are available upon request. Forward and rear cocking serrations continue the use of the X-Tac texture cuts, lending the gun a uniform appearance and, more importantly, greatly improving purchase during manual operation of the slide. The EDC X9 also makes use of an external extractor—another differentiating feature, compared to the M1911.

On the range, the EDC X9 proved to be every bit as accurate and reliable as nearly any pistol we’ve tested—performance we have come to expect from Wilson Combat. As the accompanying table shows, this gun is a shooter, with excellent sights and a light, smooth trigger. More impressive than the groups from the bench, though, was how well the gun handled in defensive-style drills and rapid-fire exercises. The gun did not discriminate between bullet type or weight, and it had no problem at all digesting +P loads, including Hornady’s 135-gr. +P Critical Duty, which was recently selected to be the new duty ammunition of the FBI. In fact, throughout our evaluation—several hundred rounds—there were exactly zero malfunctions or stoppages of any kind. 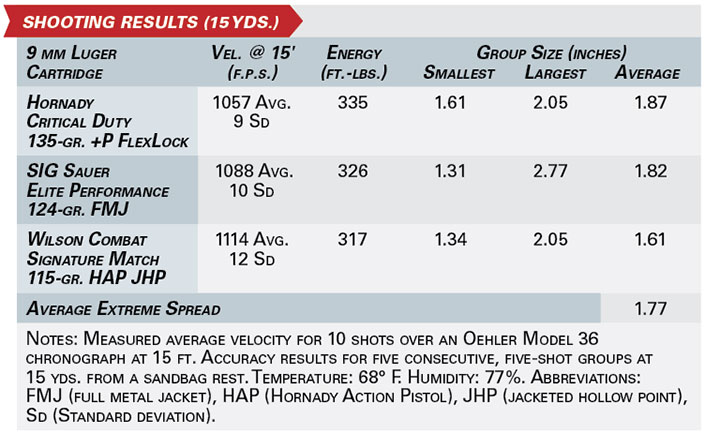 All in all, we were delighted and impressed by the EDC X9. Wilson Combat set out to produce an outstanding firearm for concealed carriers craving performance and capacity, and the EDC X9 unquestionably delivers. 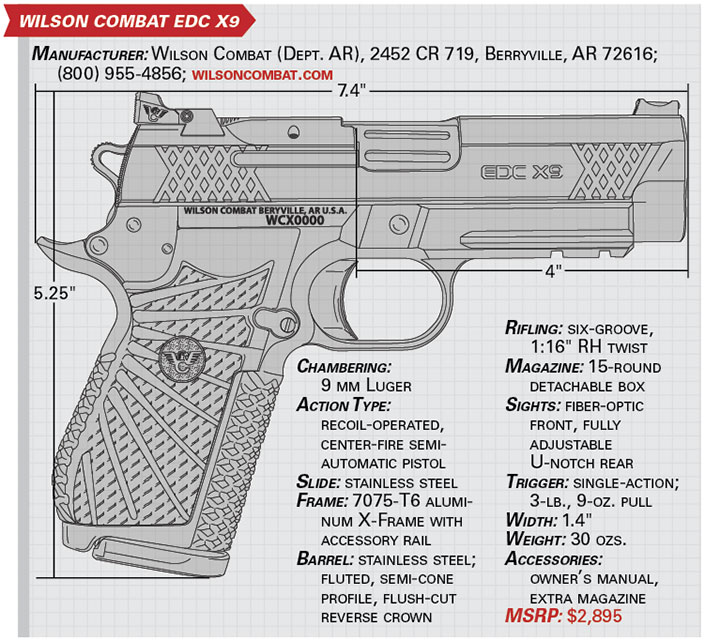 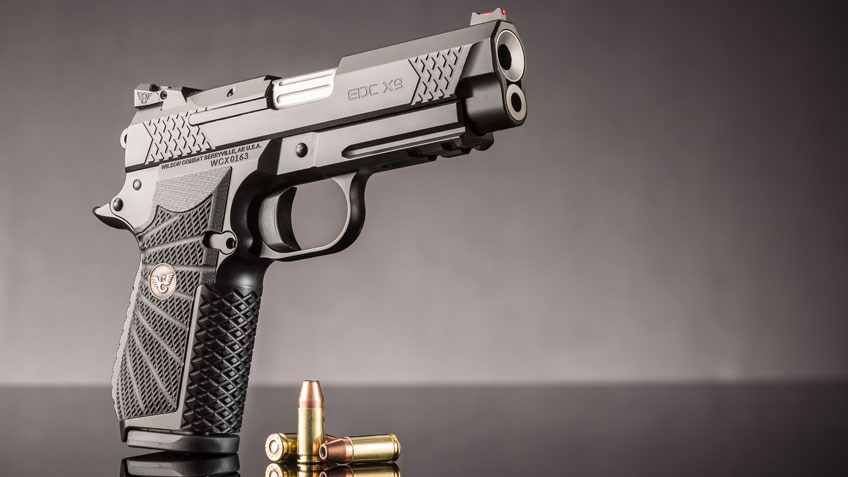