A deeply religious meteorologist for a local NBC affiliate in Rochester, New York, was canned Monday for making an on-air racial slur.

The slur was about the iconic Martin Luther King, Jr.

The network didn’t immediately do anything. But three days later, after a gust of criticism blew in, WHEC ultimately fired Kappell. Even Rochester’s mayor, Lovely Warren, said the weatherman should go.

Kappell’s Twitter feed describes himself as a “follower of my God and my dreams, a family man, foodie, and fitness freak.” In his bio, he mentions the Bible’s Joshua 1:9.

The passage states, “Have I not commanded you? Be strong and courageous. Do not be afraid; do not be discouraged, for the Lord your God will be with you wherever you go.”

His ass is out the door. So let’s hope he has some clear biblical guidance going forward.

Kappell defended himself to the Democrat & Chronicle. “I have never and would never do anything intentionally to tarnish the reputation of the greatest civil rights leader of all time,” he said.

Watch him say the slur here.

Kappell, a graduate of Purdue University, previously worked as a meteorologist in Kentucky, where he was awarded best weather anchor in 2016. In 2015, he won an Emmy for a doc on tornados.

Richard Reingold, Veep and GM for WHEC, released a statement on the matter:

On behalf of News10NBC, I apologize for our broadcast of a racial slur in reference to Martin Luther King, Jr. Park during our Friday evening broadcast (1/4/19). This word has no place on News10NBC’s air, and the fact that we broadcast it disheartens and disgusts me; that it was not caught immediately is inexcusable. I regret that we did not immediately interrupt our broadcast and apologize on the spot.

I am personally investigating how and why this happened. Our Friday broadcast does not represent the values of News10NBC, its hardworking staff, or the great people of Rochester. Dr. Martin Luther King, Jr. is one of America’s greatest heroes — for whom I, and all of us at News10NBC, have the utmost respect. I am terribly sorry to all of our viewers. We are redoubling our efforts to ensure that this never happens again. 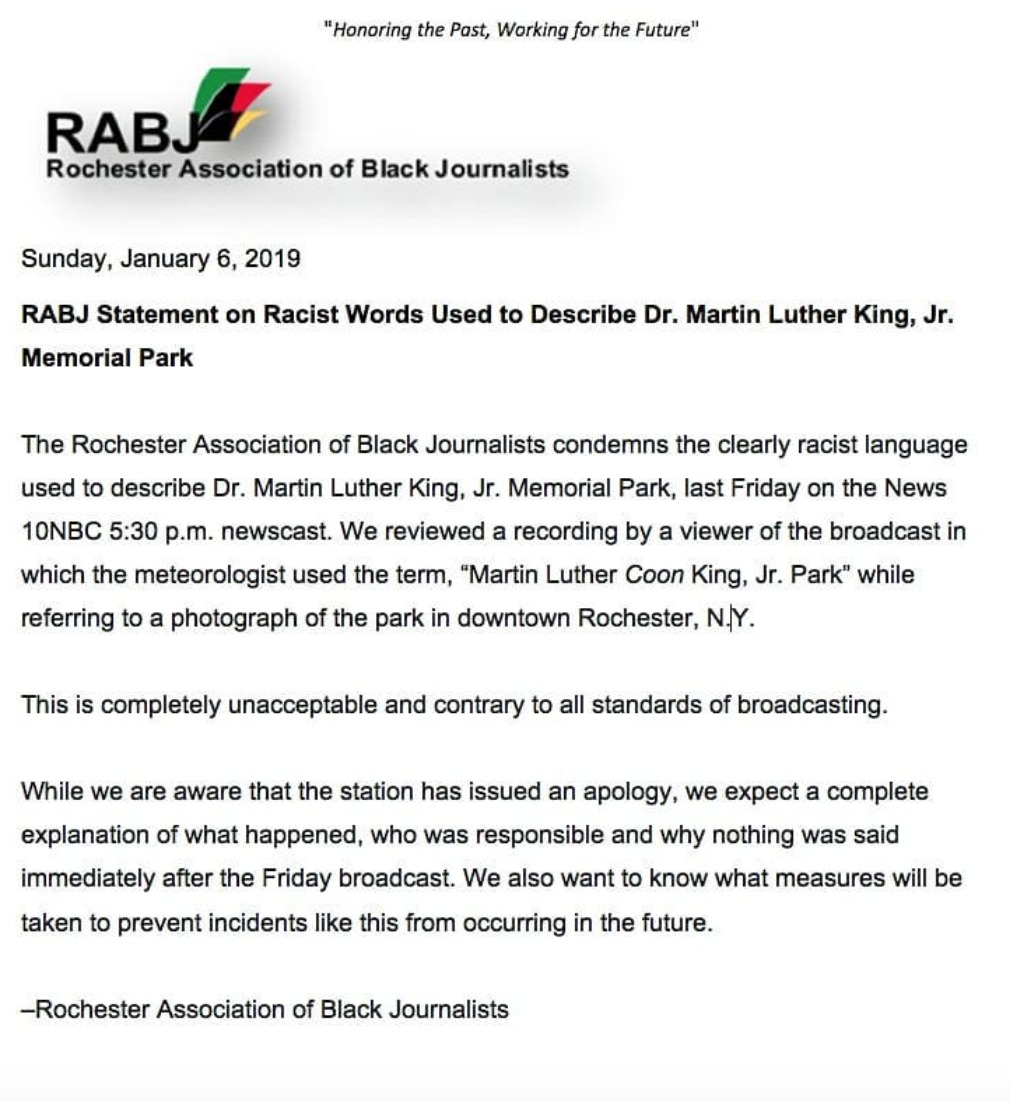 A screenshot of a statement by the Rochester Association of Black Journalists on Instagram.