Whoopi Goldberg said Democratic New York Rep. Alexandria Ocasio-Cortez needs to “sit still for a minute and learn the job” before she starts “pooping” on what others have done.

The comments were made Monday during a panel discussion on “The View” about the current 2020 front-runners for president in the Democratic party. The women discussed what the freshman congresswoman said during her appearance on “60 Minutes” when she called out “establishment” Democrats. (RELATED: Joy Behar: Female Trump Voters Don’t Know The Difference Between A Predator And A Protector)

“Listen, let me just say this about Ocasio-Cortez. She just got in on Thursday. She was sworn in,” Goldberg shared. “And she’s very opinionated, which we we like. We like opinionated women.”

“But it is very, very difficult when people make accusations where you say, you know, the Democrats have done nothing, the establishment of the Democrats have done nothing,” she said. “And I just want to throw this out to you. [Democratic Georgia Rep.] John Lewis wasn’t sitting still. [Democratic California Sen.] Dianne Feinstein wasn’t sitting still.” (RELATED: Meghan McCain Blasts Trump At John McCain’s Funeral) 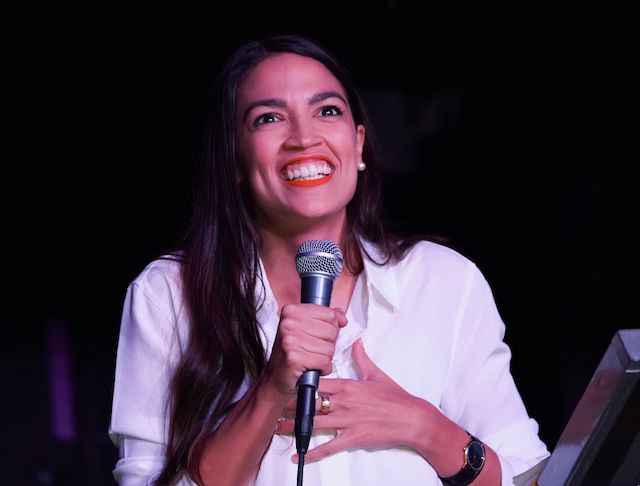 Alexandria Ocasio-Cortez speaks to her supporters during her election night party in the Queens Borough of New York on November 6, 2018. (Photo credit: DON EMMERT/AFP/Getty Images)

“So you just got in there and I know you got lots of good ideas, but I would encourage you to sit still for a minute and learn the job,” the ABC talk show host explained. Her co-host, Meghan McCain, made it clear that she was in support of the comment as the audience started applauding.

“Because, you know, there are people in the party who have been working their tails off for this country,” she added. “And they know a lot. And you could learn some stuff from them.”

Goldberg concluded, “You don’t have to be born into it. You don’t have to know it when you step out, but before you start pooping on people and what they’ve done, you got to do something, too.”