WTF is going on with George Papadopoulos’s wife?

“Scott @GeorgePapa19‬⁩ is following me with and a dog at 2 a.m. [and] he is spreading ketchup in my face! Please tell the story!!” —Simona Mangiante Papadopoulos, wife of President Trump former campaign aide George Papadopoulos. He is on a supervised release from prison for lying to the FBI.

“Can’t even get a workout in before 7 a.m. without major news breaking smh,” — Kelly Cohen, reporter, The Washington Examiner.

“Dallas Morning News just laid off 43. The Plain Dealer is cutting 29 Guild newsroom jobs. Those of us lucky enough to still work as journalists must avoid false equivalences in this time of crisis. We earn or betray the public’s trust one story — and one tweet — at a time.” — Connie Schultz, syndicated columnist and wife to Ohio Democratic Sen. Sherrod Brown.

Here’s what the AP did Tuesday night that pissed a lot of people off:

AP FACT CHECK: Democrats put the blame for the shutdown on Trump. But it takes two to tango. Trump’s demand for $5.7 billion for his border wall is one reason for the budget impasse. The Democrats refusal to approve the money is another. https://t.co/9IWnqUgl2d

“I’m trying the weird trick where you put Vic’s Vaporub all over your feet and put socks on and it helps clear your congestion which I realize sounds ridiculous but I’m willing to try anything to sleep at this point.” — Kristin Chirico.

“That warm fuzzy feeling when an ex-contact you wanting to know if you’ve hexed them based on how horribly their life is going,” —Sophie Saint Thomas, sex and Cannabis writer, GQ, Playboy, Allure.

Weiner’s ex-sexting partner wants you to feel her pain

“Some of you haven’t been in a sexting scandal with a politician & slut-shamed/vilified by the entire country and it shows.” —Sydney Elaine Leathers, adult film actress, previously sexted with ex-Rep. Anthony Weiner (D-N.Y.). (RELATED: Fake Nudie Pic Of Congresswoman Surfaces)

“Watch the news, but take heart: everything is actually much stranger and more chaotic than it appears, much less rooted in calculation and reason and much more anchored in the deep darkness of the human heart, which is opaque to onlookers and to the heart itself.” — Elizabeth Bruenig, op-ed writer, WaPo.

That column on Aussies … that has people losing their minds. Here.

TMZ: Jeff Bezos and his wife, MacKenzie, claim they are splitting up peacefully. But how will they handle the $137 billion on the table? Here.

“My unpopular opinion is that it’s a good thing for the nation’s leaders to go on national television and offer their competing arguments. How is this a waste of airtime? Have you seen what they show the rest of the time?” — Binyamin Appelbaum, Washington correspondent, NYT.

“Lol. The shit is this.” — Asawin Suebsaeng, reporter, The Daily Beast.

“A record night! Featuring the most simple-minded speech ever from the Oval Office and the most bizarre-looking two-headed response.” — Bill Kristol, anti-Trump pundit, former editor-at-large, The Weekly Standard.

“Cool cool an entire news cycle driven by an event that none of the major players (Trump, the television networks, sane people who don’t want to be working at 9 p.m.) really wanted to happen.” —Max Tani, media reporter, The Daily Beast.

He was referring to this:

“Trump didn’t want to give the speech tonight and told TV anchors at lunch today that his planned trip to the border is a waste of time.” — Maggie Haberman, NYT.

“Very gently defended AOC today and got a bunch of people calling me a member of the lib media so now I really respect the work @ComfortablySmug is doing.” — Kevin Glass, contributor, The Washington Examiner.

“The inside of my head is a real weird place.” — Katie McBride, a writer and associate editor of Anxy Magazine, also writes for Rolling Stone and The Daily Beast.

Why is he copying his former Senate opponent Ted Cruz, who totally succeeded in revamping his annoying face with a goatee? It’s not working for him.

Igor Bobic, a politics reporter for HuffPost, also has. goatee. 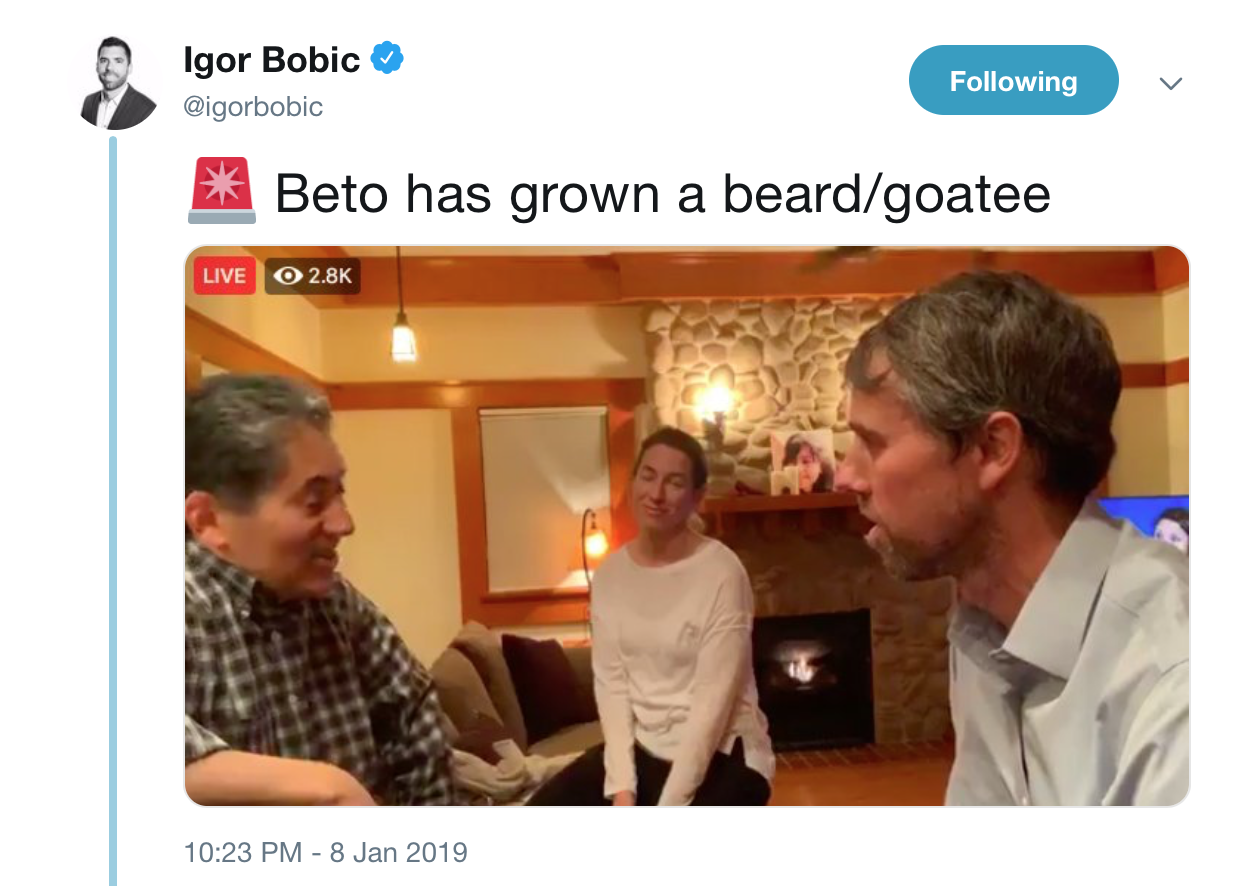