NBC’s Al Roker knows a little something about accidental eruptions. He once shat himself at the White House and went on to talk about it. On Dateline. Out loud.

Now a Rochester weatherman who emitted a racial slur during a recent forecast is getting the behemoth of defenses from Roker after a NBC affiliate fired him for saying “MLK Coon Park.” As Jeremy Kappell‘s version of the story goes, he was tongue-tied, trying to say “Junior” and “K” and accidentally driveled out “MLK Coon Park.” (RELATED: White Weatherman Fired For On-Air Slur)

And Roker — perhaps the nation’s best known weatherman — believes him.

Roker is a huge name in weather and a mammoth get for Kappell. It also helps that Roker is African American and coming to the aid of a self-described deeply religious man who emitted a horrible racial slur on air.

I think @JeremyKappell made an unfortunate flub and should be given the chance to apologize on @news10nbc Anyone who has done live tv and screwed up (google any number of ones I’ve done) understands.

But a black follower, Jerry Sutton, wasn’t having it.

“The word coon doesn’t even come close to the word Jr. period,” he tweeted. “Sometimes when you joke about something with friends behind closed doors by saying it, and you mention that word live it comes out the same way of your thoughts.”

Roker double-downed in his defense, saying, “Perhaps, but do you know that. Unless some friends or acquaintances come forward with that, you can’t make that assumption.”

Mark Taylor, a TV anchor for NBC4 in Columbus, applauded Roker. “Well said @alroker,” he wrote. ” This is outrageous. It is shocking to me the way @news10nbc @CityRochesterNY dealt with this situation.”

Stephen Sample, MD, an E.R. doc in Jasper, Indiana, jumped in to defend Kappell, calling him a “gentle, loving soul” who simply committed “spoonerism.” This is a verbal tic of sorts in which “letters or syllables get swapped,” explains fun-with-words.com.

In a nine-part tweeting spree, Sample implored the public to forgive him and begged CNN’s Don Lemon to cover the story.

“Real lives are involved,” Sample wrote. “You don’t have to dig into a nice guy’s tongue tied moment to find it. This is why they hate us.”

“Their excuse was he did not immediately stop and apologize,” he continued. “But. He didn’t realize the magnitude of what he accidentally vocalized. Newsflash- Though I know that coon can be used as a racial slur for African Americans, where we are from, it is not. Coon means raccoon.”

Sample insisted the Kappell he knows is not the one who got canned for saying “coon” on air.

“The Jeremy Kappell we know is sweeet, [sic] kind and just the happiest, goofy man you’d ever want to meet. Not a single hateful bone in his body. But. The internet wanted a blood sacrifice. And it got it. He was summarily fired by his spineless news station @news10nbc.”

Here’s his simple explanation of what really happened:

“He was announcing an event taking place at Dr MLK, Jr park,” he tweeted. “He began saying King and junior together. Was going to come out “Koonior”, but he caught himself and said ‘coon’  and corrected to King. The internet attacked.”

There is a petition circulating to defend Kappell. So far, some 32,000 people have signed it.

However, the station that employed him isn’t taking this incident lightly.

Roker may be a powerful name in weather. But even he may not be able to fix this.

Below is the stern statement the NBC affiliate released Tuesday: 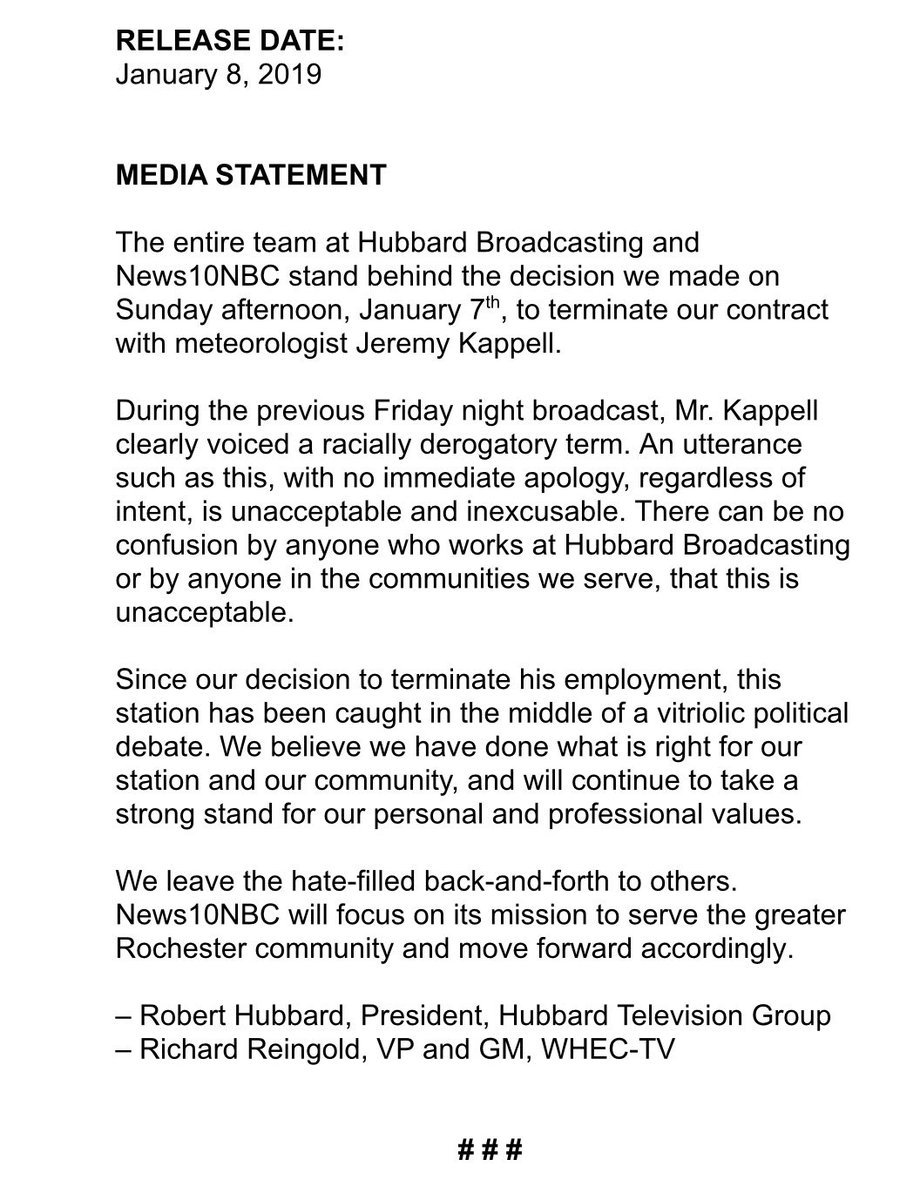