President Donald Trump reportedly publicly rebuked Mick Mulvaney during shutdown talks earlier this month after the acting White House chief of staff spoke out with a negotiating angle the president didn’t approve of.

According to a Sunday Axios report quoting two sources who were present, the exchange occurred Jan. 4 in the White House Situation Room after Trump had reiterated his $5.7 billion border wall request.

Mulvaney inserted himself into the conversation and tried to negotiate a compromise sum of money, according to the sources in the room. Mulvaney said “that if Dems weren’t OK with $5.7 [billion] and the president wasn’t OK with $1.3 [the Democratic offer] … he was trying to say we should find a middle ground,” one of the sources said, paraphrasing Mulvaney’s remarks.

“Trump cut him off … ‘You just fucked it all up, Mick,'” the source recalled Trump saying. “It was kind of weird.” Another source who was in the room confirmed the account. That source said their impression was that Trump was irritated at Mulvaney’s negotiating style. “As a negotiator, Trump was resetting,” the source said. “Mick was not reading the room or the president.” 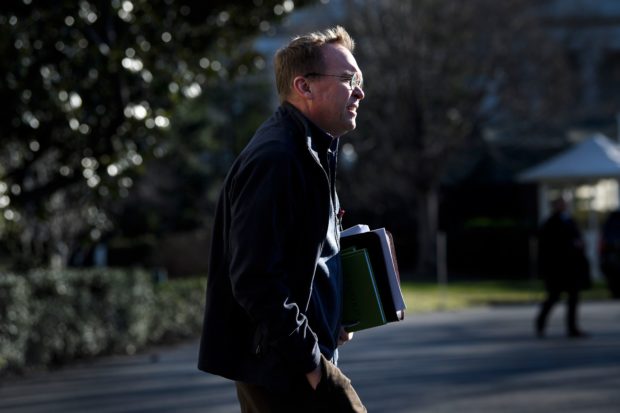 Acting White House Chief of Staff Mick Mulvaney follows US President Donald Trump to Marine One on the South Lawn of the White House January 10, 2019 in Washington, DC.  (Photo by BRENDAN SMIALOWSKI/AFP/Getty Images)

When Axios questioned a White House official on the matter, the official reportedly did not deny the account, but called it “an exaggerated account of the exchange that doesn’t reflect the good relationship Mulvaney has built over the last two years with the president.” (RELATED: Ted Cruz Mocks Schumer, Pelosi Rebuttal Speech — ‘That Thing Looks Like A Hostage Video’)

“The president and Mulvaney joked about it afterwards,” the official told Axios.