Over the weekend, YouTube removed one of Live Action’s videos under the premise that the video “violates the community guidelines.” Though Live Action appealed the decision, YouTube rejected their appeal Sunday. 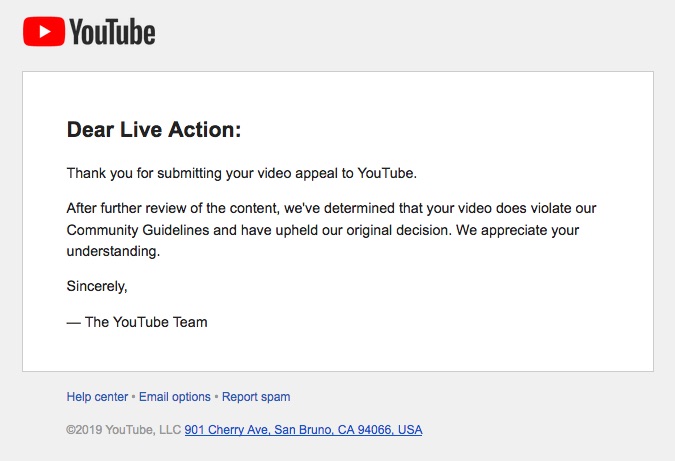 It was not until Monday afternoon that YouTube apologized to Live Action in a tweet, claiming that the censorship was a mistake.

Confirmed that this was a mistake on our end–the video is now reinstated. Apologies for the frustration this may have caused.

The official in the video claims that women older than fifteen who come into the facility always go unreported – as long as they say the father is fifteen or older. “Fourteen and under, we do have to report,” she tells him.

When the pimp questions the official what to do if the girls are fourteen or under, the official tells him, “You never heard this from me,” and offers a piece of paper showing where girls under fourteen can get abortions.

“Just play along that they are students,” the official says. “We want to make it look as legitimate as possible.”

The video includes footage of the official warning the pimp that “additional information” regarding the patient’s sexual encounters could cause Planned Parenthood to have to report the abortion. She also offers advice on how the girls can continue to make money in the weeks after their abortions when they cannot continue to be sexually active.

Live Action posted the video with the caption: “Planned Parenthood is required by law to report child sexual abuse, but it routinely covers up these crimes. On this #HumanTraffickingAwarenessMonth, watch as a Planned Parenthood manager aids a child sex trafficking ring.”

Lila Rose, the founder of Live Action, tweeted Monday morning that YouTube had removed the video. Rose herself has orchestrated and overseen several undercover investigations of Planned Parenthood, starting as young as eighteen to pose as an abuse victim needing an abortion. Rose has since advocated against abortion on many fronts, including to the European Parliament and to the United Nations. She has been noted as one of the National Journal’s Most Notable Women in Washington Under 35.

“The popular narrative has been that abortion is going to somehow empower women,” Rose has said, “when we know that it’s an act of violence against our children.”

Only last week, Prager University filed a lawsuit against Google and YouTube alleging similar censorship. The suit claims that “This lawsuit is ‘round two’ of the parties’ dispute over whether Google/YouTube are above the law when it comes to regulating free speech and expression on YouTube solely because Defendants are private entities who own and operate YouTube for their own profit and commercial gain.”

YouTube’s actions are particularly noticeable in light of the upcoming March for Life, which will take place in Washington, D.C. on Friday, January 18.