“I have a serious question. Where is Jim Jordan’s sport coat? I’m just joking, but it’s true. I’ve often wondered where his coat is.”

— CNN’s Don Lemon laughing on his program late Tuesday night. Rep. Jim Jordan is a Republican congressman from Ohio. He is a founding member of the Freedom Caucus. One of Lemon’s panel guests, Michael Moore, a former U.S. attorney, cracked, “I think it’s in the same place where the president’s comb is.”

B.S. of the Day: Ocasio-Cortez Is Uncomfortable With Attention She’s Getting

PAUL KRUGMAN, columnist, NYT: “A few thoughts on the Ocasio-Cortez effect on policy discourse, which has been salutary in ways that have little to do with her specific ideas. …To be honest, I’m somewhat uneasy about all the attention @aoc is getting, because a lot of it is obviously for the wrong reasons. She’s telegenic and her shocking rise makes a good story; but there are lots of impressive freshmen in this class, and she gets all the attention.”

ALEXANDRIA OCASIO-CORTEZ (D-N.Y.): “I’m uneasy about it too. It’s stressful & scary, but it’s also out of my control, so the best thing I can do is try to focus that attention on the most urgent issues of our time: climate change, good gov, jobs, wages, justice; and highlight the contradictions you explain here.”

(RELATED: Here’s A Story That Inexplicably Pissed AOC Off)

“Some news… The first hires for the new Gawker have been announced:

— ⁦‪@CarsonGriffith‬⁩ will be editorial director

— ⁦‪@sufferings‬⁩ will be senior editor

Leathers thanks her neighbors for not murdering her

“I’d like to take a moment to thank my neighbors for not murdering me in my sleep last night even though I left my keys in the door & they totally could have.” — Sydney Elaine Leathers, former sexting partner to New York Democratic ex-Rep. Anthony Weiner, who is in the slammer for sexting with a minor.

Journo has quite a dog on his hands

“The dog I am helping take care of just peed on the couch beside me. How is everyone’s afternoon going?” — Cameron Hawthorne, Washington Free Beacon.

“Genuine question for the progressive Democrats still upset about what happened with Al Franken: How do you think the Brett Kavanaugh hearings would have played out if Franken was still in the Senate and on the Judiciary Committee?” — Matt Berman, politics editor, BuzzFeed News. BTW… Franken hasn’t ruled out running for office again.

“Ladies, unless you’re tweeting that when you went through TSA today, you overheard some dude saying how he wished he could get a look at your autoporn [sic] machine pic because he likes boobies, I am not gonna believe anything you tweet about ‘TSA agent said this.'” — Liz Mair, Republican communications strategist.

BRENT BOZELL: “Congrats to @JohnKasich! You have fulfilled every RINO’s dream and have officially become a member of the anti-Trump liberal media. Especially at America’s #1 fake news network.” (CNN announced that Kasich is a new political commentator for the network.)

JAKE TAPPER: “Old enough to remember Brent Bozell calling Donald Trump: ‘a shameless self-promoter, a huckster, selling only yourself. God help this country if this man were president.'”

“Klobuchar: ‘If you’re confirmed, will the Justice Department jail reporters for doing their jobs?’ Barr does not answer directly. Says he ‘can conceive of situations’ whereas a ‘last resort’ that could happen, especially if a news outlet has run through a ‘red flag.'” — Seung Min Kim, White House reporter, The Washington Post.

Sinclair‘s Sharyl Attkisson says vaccines can cause autism. Here. The Daily Beast‘s idiotic Will Sommer describes it like this: “Former CBS reporter turned right-wing kook Sharyl Atkisson is an anti-vaxxer now, and The Hill’s op-ed section is running her vaccine fear-mongering.”

NBC offers its employees guidelines… on use of the word “racist” as a descriptor for Rep. Steve King (R-Iowa). Here.

What a trip… “What appears to be an eighth-grade field trip to the Capitol is in the gallery, watching King defend himself over his racist comments.” —Joe Perticone, reporter, Business Insider.

Jeff Bezos’s love life — if you can stand reading any more about it. Here.

Shockingly, the online mob largely forgave Zach Ford. He says he’s going to try to be “more sensitive” in the future. 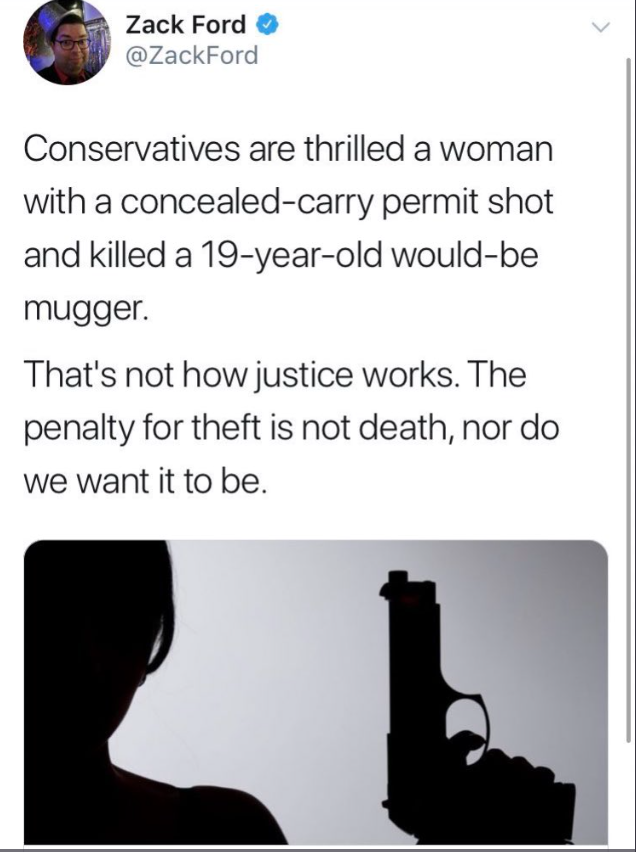 1:27 p.m. Tuesday — “THREAD: I want to offer both some apologies and clarifications about a poorly-worded tweet I sent about an incident of gun violence. I have since deleted the tweet.”

1:30 p.m. Tuesday — “The punishment for armed robbery is not death, though. Of course I don’t think he should have had a gun either, but if she had let him rob her, even at gunpoint, both likely would have survived. It’s the praise for her gun ownership that bothers me.” — Ford.

“First, I believe people have the right to defend themselves. My tweet suggested otherwise, and for that I apologize.”

The Daily Wire‘s Ben Shapiro had no sympathy:

“My tweet also ignored the context that this took place in a neighborhood with high rates of violence. That’s an experience I don’t have and shouldn’t speak to. For that I also apologize.”

“My tweet suggested that conservative outlets covering this story were happy about a death. That was not my intention, and I apologize.”

“My ideal is for the world in which guns do not have to be a part of anyone’s daily life and in which gun deaths are not a part of our daily news. I stand by this ideal and disagree with the proposition that more guns will make people safer.”

“I’m going to try to be more sensitive in my advocacy in the future. For now, I stand humbled by my mistaken simply ask that others will continue to work with me in good faith to end gun violence for all people.”