A bill introduced recently in the Connecticut General Assembly is proposing that Connecticut public schools be required to teach students about climate change starting in their earliest years.

The short text of the proposed legislation, H.B. No. 5011, demands that existing statutes governing state education be amended “to require that the science curriculum of the prescribed courses of study for public schools include the teaching of climate change and that such teaching begin in elementary school.” (RELATED: Democratic 2020 Hopefuls Turn Senate Hearing Into Climate Change Brawl) 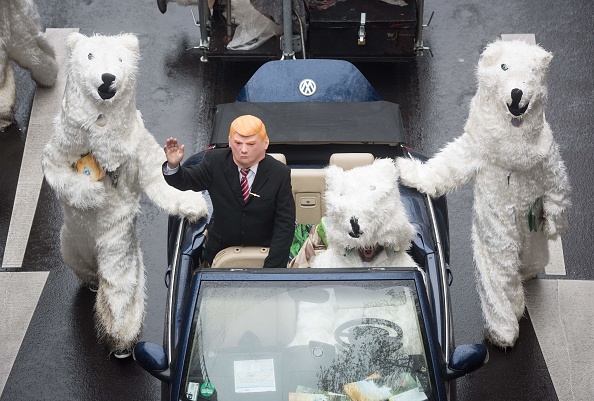 A demonstrator dressed as US President Donald Trump waves from a car as he parades with other activists dressed as polar bears during a protest of the action group “No Climate Change” on November 11, 2017 in Bonn, western Germany, where is taking place the COP23 United Nations Climate Change Conference. (BERND THISSEN/AFP/Getty Images)

“A lot of schools make the study of climate change an elective, and I don’t believe it should be an elective,” Democratic state Rep. Christine Palm, who introduced the bill, told the Associated Press. “I think it should be mandatory, and I think it should be early so there’s no excuse for kids to grow up ignorant of what’s at stake.” (RELATED: Male Gym Teacher Allegedly Punished For Refusing To Watch Girl Shower)

Connecticut is among the 19 states that, along with the District of Columbia, adopted the Next Generation Science Standards (NGSS) in 2015. Though the standards recommend addressing climate change in middle school, Palm’s H.B. No. 5011 would go a step further and begin earlier. If adopted, it would be the first law that explicitly requires schools to catechize students in the tenets of climate change.

Palm maintained to the AP that while she would love to legally force the teaching of poetry, climate change is simply much more important. “I’d love to see poetry be mandated. That’s never going to happen,” Palm said. “That’s not life or death.”