Canadian researcher Vivian Krause says American progressives are working to stop development of the oil sands, as well as any pipelines that might move its petroleum to refineries.

The Alberta oil sands region potentially contain more petroleum than Saudi Arabia possesses and has been the target of environmental groups in Canada and the U.S. for more than a decade. Actress and activist Jane Fonda made a hugely publicized trip to the region in 2017, claiming that the oil sands project was not only an environmental travesty but showed a flagrant disregard for First Nations land.

Ironically, it is a First Nations umbrella group in Alberta that is considering buying the Trans Mountain pipeline that sits unfinished after Canadian Prime Minister Justin Trudeau nationalized the project, buying it from Texas-based Kinder Morgan. Construction is stalled because a Canadian court has ruled that the federal government’s consultation with affected Natives was inadequate. (RELATED: Trudeau Government Nationalizes Kinder Morgan Pipeline For $4.5B)

As the Calgary Herald reported, Krause was in Calgary on Wednesday, speaking to the Indigenous Energy Summit and told the largely Native crowd of the Indian Resource Council (IRC) why there is so much opposition to the oil sands and pipelines from environmental groups that always seem flush with money.

They are being supported by American progressive groups that are, in turn, financed by the Rockefeller Brothers Fund.

Krause admitted to the crowd that the relationship seems bizarre: “Frankly, if I was just to tell you who paid whom and how much, it’s hard to believe. It comes off like a tinfoil-hat conspiracy theory.” But she says the evidence is right there in the foundation’s tax records and the result has been that the Alberta oil sands is now “the poster child of dirty fuel. And that’s not the truth.”

She warned the IRC that if it does end up buying the pipeline from the Trudeau government, they will “get a foreign-funded campaign along with the pipeline” that would put American progressives in direct opposition to oil patch workers and First Nations bands.

Kraus discovered the convoluted financing arrangements when researching opposition to Canadian salmon farms and she discovered how the Rockefeller Brothers Fund was donating millions to the U.S. group Corporate Ethics and, by 2012, the Washington, D.C.-based New Venture Fund. (RELATED: Tides Foundation Spent Millions To Defeat Conservatives) 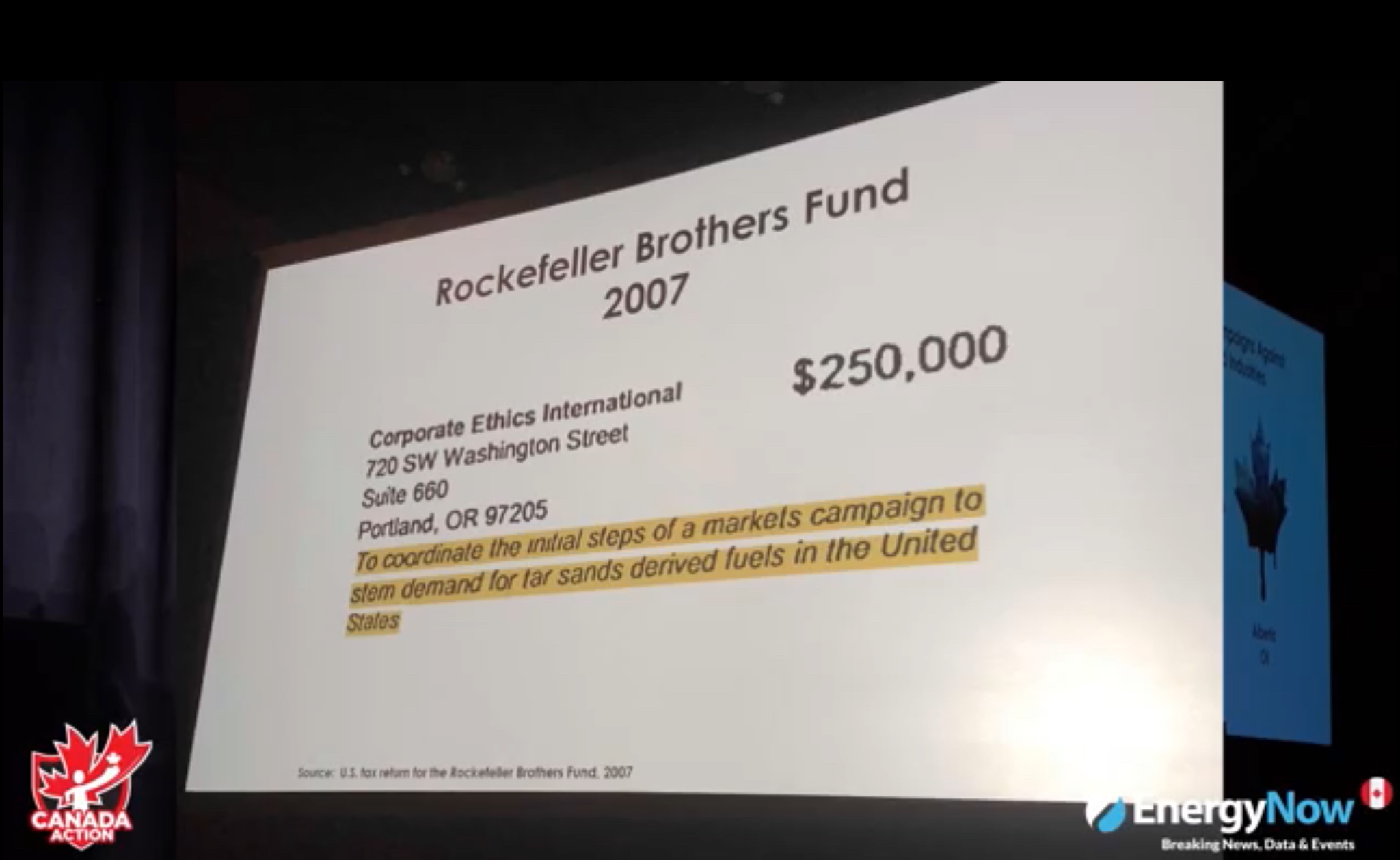 A slide from Vivian Krause’s presenation to the Indian Resource Council in Calgary on Jan. 16, 2019. Facebook screenshot.

Calling itself “stategic advisors to environmental campaigns,” Corporate Ethics explains on its website how it had “to recruit the groups, develop the strategy, create a co-ordinated campaign and act as a re-granting agency for the North American Tar Sands Campaign.”

Executive Director Michael Marx actually states on the site, “From the very beginning, the campaign strategy was to land-lock the tar sands so their crude could not reach the international market where it could fetch a high price per barrel.”

Marx notes, “This strategy is successful to this day. All the proposed pipelines in Canada have effectively been blocked.”