A GRAY SOFA IN D.C. — “Bombshell or Buzzkill. I’m Brian Stelter and THIS is Reliable Sources.”

Even for “Reliable Sources” host Brian Stelter, there was no way he could go easy on his first two guests on Sunday’s show: BuzzFeed’s Editor-in-Chief Ben Smith and reporter Anthony Cormier. Cormier is one of two reporters who broke BuzzFeed‘s bombshell story this week that alleges that  President Trump directed his former lawyer Michael Cohen to lie to Congress.

The other byline on the story is Jason Leopold.

So where is he?

When Stelter asked why Leopold wasn’t here, Smith absurdly says Leopold is too busy reporting out the story to do a 20-minute TV hit. They can’t take TWO reporters off the beat to appear on CNN, can they? In the context of BuzzFeed-splaining the story that no reporter in the entire news industry can corroborate, the least Smith can do is not lie about something so dumb.

“He is out reporting,” Smith says. “I’ve already dragged one of my reporters who has not gotten on a lot of sleep into the studio,” he says as he and his reporter share a smile and laugh. “I am here with you. Jason is out reporting.” 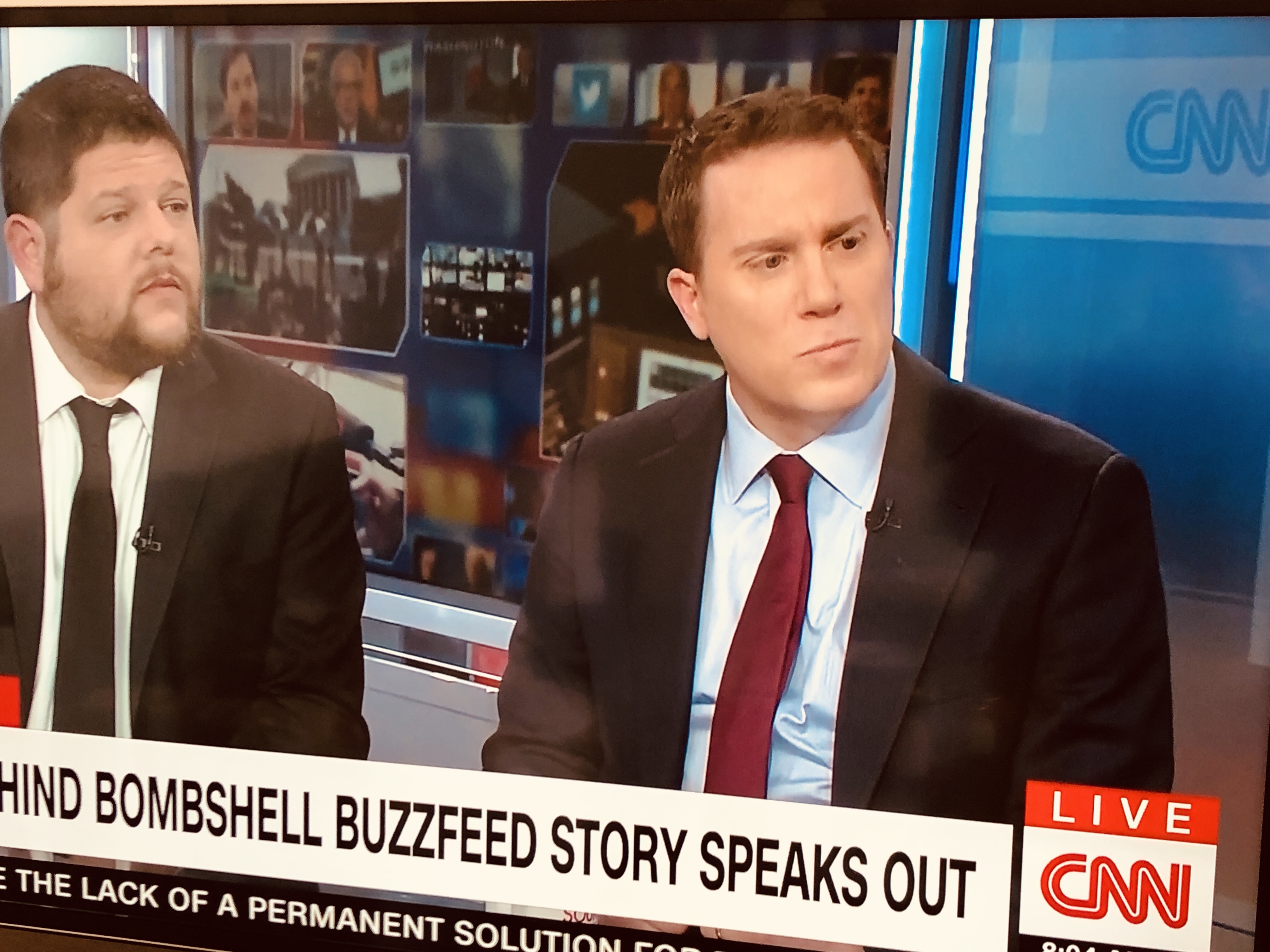 Smith seems to be saying: Come on. I am here. Am I not enough? He makes no mention how angered he was at Oliver Darcy’s CNN story that covered Leopold’s past. Just days ago, Smith snapped at Darcy on Twitter, calling his language “lazy.” (RELATED: BuzzFeed Goes For CNN’s Jugular)

Leopold isn’t here because he was caught plagiarizing earlier in his career. The optics aren’t great. And they all know it. Smith points out the finer points of Leopold’s resumé, as Smith puts it, he was a Poohlitzer finalist and was invited to train CNN employees on FOIA research. He says his mistakes happened some 20 years ago, so who cares? The message appeared to be: Believe him. So what if he previously lied? He’s not lying now.

Cormier is far more preferential from a PR perspective. With facial hair snaking around his large, square face and layering the area under his chin, he sideburns bleed into his beard and he looks like a lumberjack who enjoys buttermilk biscuits. His manner is gentle. He smiles and says all the soundbites Smith will like. Smith looks adoringly at him as he speaks, grinning and on the brink of glee as he spills out folksy talking points.

Cormier reminds me of Puck from ABC’s Scandal. He’s the character who takes pliers and yanks out teeth for fun in torture scenes. But he’s gentle and caring and the other characters love him.

“We’re trying to get deeper inside the room where this happened,” he says.

Cormier defends himself in a soft-spoken, calm manner.

“Never great, but I’m solid. My sources are solid,” he says. “This reporting is accurate.”

This next part makes Smith burst with pride as he watches his reporter talk.

“I’ve been a reporter for 20 years,” he says. “My first job was on the loading dock of the Panama News City Herald. Right? They wouldn’t give me a job inside because I was too young and green. I’ve been doing this again and again and again and again. The same fundamentals that I learned covering the police, city hall and courthouses stands today. I use the same skills and rigor to cover the White House. This is going to be born out, Brian. This story is accurate.”

“What if the sources are just wrong?” Stelter asks.

The pair continuously thanks Stelter profusely for having them on his show.

“Thank you,” Smith began. “Thanks for having us on. We’re we’re [sic] happy to talk about this story. I’m glad you began with the question of the truth of the allegation.”

Smith is giddy. He says just an hour ago on CNN’s own Jake Tapper‘s “State of the Union,”  Trump’s lawyer Rudy Giuliani was asked if Trump talked to Cohen about his testimony. Giuliani’s answer was: “So what?” The reaction from Congress to this story has been intense — Rep. Adam Schiff (D-Calif.) plans to investigate no matter what Mueller’s office says.

The buttering up was relentless. These are not quotes, but this was the unspoken thought bubble I sensed while watching this spectacle. Thank you, Brian. Thank you for letting us come on and tell our side. Oh, Brian, you’re so nice. We love your show. We love you. Did we mention we love you?

“I gotta be honest with you,” Cormier says, noting that their reporting is 100 percent right. “This morning Rudy Giuliani seemed to signal there was going to be a leak investigation. …In order to protect our sources we are not going to talk about sourcing.”

Stelter wants to know if they have more than two sources. Except that’s a sourcing question.

“I am not going to talk about the sourcing,” Cormier says.

Stelter asks if he has spoken with his sources since the story published. Except that’s a sourcing question.

Cormier won’t discuss the timing of when he spoke to his sources, but yes, indeed, “the same sources are standing behind it, as are we.”

He also won’t talk about the strange discrepancy of his colleague, Leopold, who said that he had seen the documents. Cormier, meanwhile, says he has not. Cormier bypasses the question. He continues his refrain that he won’t get into the sourcing.

Cormier says they are “very rigorous” in their reporting. “We vet and run down every aspect of this,” he says. “We have been drafting this for ages, weeks and weeks.” He says they have been reporting out this particular piece for “months.” Smith says at least three editors worked on the story. Smith says it could have ran before Thursday, but it was “ready to go.”

One sharp point of contention is an email request for comment sent by Leopold to Special Prosecutor Robert Mueller‘s office.

Stelter posts the three-line email to Spokesman Peter Carr on the screen. He thinks it’s a “shockingly casual” way to ask for comment on such a serious story. Carr declined to comment. But Carr has since told The Washington Post that had the email come with more detail, he would have provided a better, more elaborate response. Cormier calls Carr “a lovely spokesperson.”

“That was a choice he made,” Smith says rightfully.

Sounds like a big fat fib on Carr’s part, but so be it. It’s a chance for Stelter to get furious.

“Come on, one paragraph? That’s a dereliction of duty to send a three-sentence email,” Stelter says angrily.

Stelter brags that when he sends an email request for comment to BuzzFeed, he has bullet points and lines and lines of everything he intends to write. Really. Everything? Reporters are not required and should not offer their stories up for proofreading.

But Stelter wants to know why the story ran Thursday. Why not wait for more sourcing?

“We published because we were very very confident in the sourcing of the story,” Smith said, explaining that this is a story that has been in the works for a long period of time.

Stelter wonders if they feel their jobs are on the line: “Cuz I worry about BuzzFeed’s brand as a whole.”

Smith says, “I appreciate your concern.”

At one weird part shortly thereafter, Stelter says, “Forget the cameras are on.”

The two men pause and share a special moment.

“It’s hard,” Smith says. “It is hard,” Stelter sympathizes with him.

What really happened? Did Trump use mob talk? “Take care of me, don’t screw me,” Stelter suggests in his best Soprano‘s lingo.

Stelter wants to know if Smith is fed up that Mueller’s report is taking so long? Before Smith can answer, the host raises his hand and says, “I am.” Smith tries to explain to Stelter that he isn’t trying to write Mueller’s report for him.

Cormier compliments Stelter on a question he asks at the end of the interview that makes me internally wince.

“Anthony is there anything I’m leaving out, anything I haven’t asked you?” Stelter asks.

“That’s the best reporter question, right?” Cormier says, relaxed and smiling. “It’s what you end any interview with. I really appreciate you having us on,” he says. “We’re here to talk about our work.”

Are these three going to kiss?

Stelter says, “I greatly appreciate both of you being here and. being transparent.

“And we really appreciate the opportunity to come on,” Smith adds.