“Scenes from therapy: Today, in my therapist’s waiting room, a woman eyed me, my stroller, and then gave me an unprompted ‘It Gets Easier’ pep talk. #TwoForThePriceOfOne.”

— Ashley Parker, White House reporter, The Washington Post. Last week, she wrote that possible Texas Democratic presidential hopeful Beto O’Rourke’s unusual rant about being “stuck” and “in a funk” sounds like her: “Beto here sounds disconcertingly like most women I know on maternity leave.”

Other journos rushed to support her:

CNN’s Maeve Reston: “You are doing great mama. I’m so proud of you. Early days are the time when every mom feels most exhausted, isolated and overwhelmed. All you have to do is hang on by your fingernails and keep climbing the mountain. You’ve got this.”

MSNBC’s Joe Scarborough: “It gets easier … when they turn 30.”

The latest in Michael Cohen news…

His testimony before Congress will be postponed due to “ongoing threats against his family from President Trump and Rudy Giuliani.”

U.S. Representative-elect Alexandria Ocasio-Cortez (D-NY) reacts inside the House Chamber as the U.S. House of Representatives meets for the start of the 116th Congress on Capitol Hill in Washington, U.S., January 3, 2019. REUTERS/Jonathan Ernst – RC119E973B80

The youngest, most vocal freshman in Congress is on the cover of the latest issue of The Hollywood Reporter. The headline blares that the New York Democrat will “storm” Sundance. A Mirror source who saw her plane schedule says she plans to attend the festival in Utah for three days.

Seems like an odd political move to attend a ritzy film festival during a government furlough. Inside the cover, the mag says she will “seize the Sundance spotlight” as she appears in a new political doc called Knock Down The House. AOC doesn’t seem to have met a camera she doesn’t love, be it her own selfies or a hoard of media appearances. On Martin Luther King Day Monday, she appeared on The Colbert Report, a show that incessantly turns President Trump into a buffoon. She also recently appeared on CBS’s “60 Minutes.” (RELATED: AOC Ridiculously Freaks Out About A Piece That Defends Her)

“Maybe he thinks he that he’s met his match,” AOC told the mag about why she thinks Trump hasn’t yet blasted her.

The story says she was living off $7K in savings when she was elected to Congress. The former waitress is still paying off $25K in student loans. She has said she worries about finding affordable housing in Washington while still maintaining a large presence in her Bronx district. In late 2018, after she was elected to Congress, she tweeted that she bought her first couch. In an interview with the NYT, she wondered how she’d possibly afford rent in D.C. She said she wouldn’t be able to find a place until she received her first paycheck.

And now she’s galavanting off to Sundance?

The 86-minute film in which she appears will run five times during the festival beginning January 27 to February 1.

I can’t imagine a hotel at Sundance and a flight to get there are cheap.

She plans to leave this Friday and return Monday.

Price tag: According to Expedia, If she flies non-stop from DCA to Salt Lake City and hasn’t gotten her ticket yet, she pays $1,006. If she goes bargain style, she pays $755 with a two-hour layover in Denver. Many of the hotels have already sold out. But if AOC slums it at the 3 1/2 star Bear River Lodge in Coalville, with flight, she pays $2,864. A perk: Backcountry snowmobiling is available within 32 miles. The distance to Sundance: 24.6 miles. The next lowest price in a bundle flight/hotel is at the Log Cabin on the Stream which would set her back $1,980.

If AOC really wants to save cash, she could stay right at Sundance in a streamside two bedroom cabin for $295 a night. The least expensive dwellings The Mirror could find is a 1960’s roadside motel near Park City for $44 a night.

According to the House gift rule, Ocasio-Cortez may accept “virtually any gift” that is less than $50. The lid on gifts is $100 a year. The rule explicitly includes “entertainment” or “hospitality.”

The Covington High School boys will also ALLEGEDLY meet with President Trump at the White House.

Sitting down with Nicholas Sandmann – the student at the center of the protest controversy at the Lincoln Memorial. Airs tomorrow on @TODAYshow pic.twitter.com/oSb8ljunQN

Nick Sandmann on NBC’s “TODAY” Show: “As far as standing there, I have every right to do so. My position is that I was not disrespectful to Mr. Phillips. I respect him. I’d like to talk to him. I wish we would have walked away and avoid the whole thing. ..In hindsight I wish we would have found another spot to wait for our buses. …I wasn’t smirking. They’ve gone from there to labeling me as a racist person.”

Symone Sanders, who appears often on CNN and contributes to Crooked Media, cracked, “When you’re trying to remember the lines the PR team gave you.”

“FINALLY……this ‘Behar idiot’ tells the truth with a disgusting smile. Joy @JoyVBehar, you are one evil B!t<h.” — Juanta Broaddrick, who maintains former President Clinton raped her when he was AG of Arkansas. Behar admitted on Wednesday’s show that people jump to conclusions about the Covington Boys “because we’re desperate to get Trump out of office.”

“I was told a few minutes ago that @indystar has laid me off. I’m in shock. Not how I wanted 35 year journalism career to end.” —Tim Swarens, opinion editor, Indy Star, which is part of the USA Today network owned by Gannett.

Laura Ingraham jumped the gun on a White House meeting

INGRAHAM: EXCLUSIVE on the new #LauraIngrahamPodcast— the Covington Catholic students threatened by the leftist internet mob will be meeting with @realDonaldTrump at the White House as early as tomorrow.

FIN GOMEZ, CBS News White House producer: “Senior WH official tells us that the reporting is inaccurate. The Covington Kids have not been invited. Senior WH aide says: ‘They are not coming tomorrow, they are not coming this week, that does not mean they are not going to come at all? I don’t know.’ Says nothing is imminent.”

The Daily Beast‘s Asawin Suebsaeng cracked, “If the president of the United States were my dear friend and I had a direct line to him, my news would probably be at least slightly less fake than Laura’s.”

Senator shouts out to Baer after car accident

“Hoping @BretBaer and his family are recovering from the recent accident. A great family. Thinking about all of you!” —South Carolina Republican Sen. Lindsey Graham

In the accident in Montana, Baer’s car collided with a pickup truck before careening into a ditch and flipping on its side.

“Hi Bret. My husband was the passenger in the truck. David was taking him to his cancer treatment because he is a great guy. While my husband was in the ER I checked on your family and they said you’d be ok. Those [two] and our dog will be ok also. #countyourblessings.” —Lisa Burns.

But she isn’t, really.

See what the Chicago Sun-Times wrote here. Memo to the newspaper: Hot water is when she loses a show or a contract. Think Roseanne. Or Kevin Hart. Being dinged on Twitter does not equal “hot water.”

“Alyssa Milano is in hot water after comparing the MAGA hat worn by Trump supporters to the hood worn by members of the Ku Klux Klan.” — Chicago Sun-Times.

CNN’s Chris Cuomo apologizes for something

“Deleted my original tweet because it was taken literally the opposite way that I intended it. Sen [Kamala] Harris [D-Fla.] has no duty to justify any such accusation, let alone a birtherism attack. You accuse, you prove. That was my point. Apologize for confusion.” — Chris Cuomo.

OK, here’s what he’s sorry for… 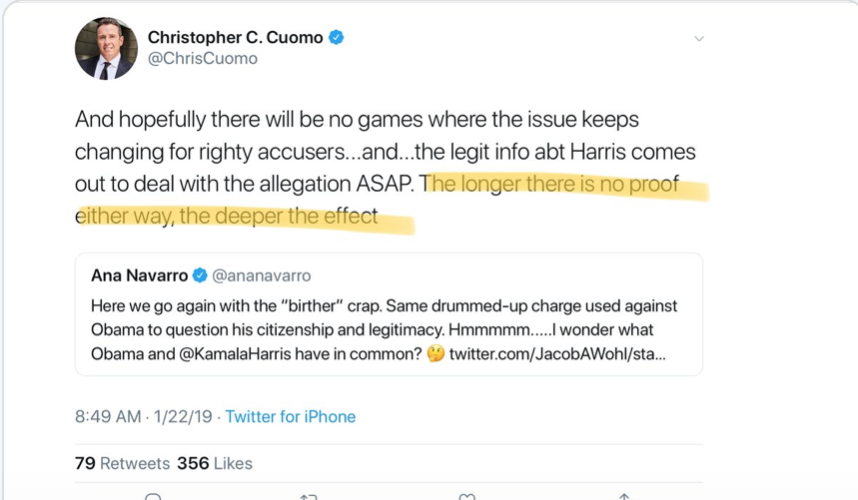 He refuses to say whether he wears a toupee. The Mirror does not believe that he does.

“I owe you no such response. You accuse, you prove. First, whatever my hair is it is better than your’s…second, if it is an actual dead animal on my head – does that count as a toupee?” —Chris Cuomo responding to Jules Suzdaltsev, who is based in LA and writes for Seeker.com wrote, “I am still waiting for Chris Cuomo to respond to the legitimate allegation that he wears a toupee. The longer there is no proof either way, the deeper the effect.”

“Just got a celery juice drink — BY MISTAKE — and really I don’t understand y’all at all.” — Sam Sanders, host, NPR.

Journo hater Alec Baldwin gets anger management class for a dustup involving a man stealing his parking spot. The man said Baldwin punched him. But a surveillance video shows there was mutual shoving. Maybe that‘s why he got off.  Here.

Splinter News: The site solicits government shutdown stories … and gets them. They ran the emails. One story involves a furloughed worker experiencing the “humiliation” of getting free food. Here.