Democratic lawmakers on the House Intelligence Committee are asking Twitter to provide more information about a suspicious account that reportedly pushed a viral video about the incident Friday between high school students and American-Indian activists.

Twitter suspended an account called @2020fight that posted a caption and a minute-long video of the confrontation between the Covington High School students and American-Indian activists. Democratic Sen. Mark Warner of Virginia told The Huffington Post Wednesday his office contacted Twitter regarding the video.

The demand for more information comes off the heels of a CNN report Tuesday showing the original video, which was tweeted out Friday, was viewed at least 2.5 million times and was retweeted roughly 14,400 times. It did not show what happened before the boy’s confrontation with American-Indian activist Nathan Phillips. (RELATED: Did A Covert Misinformation Campaign Help Promote Media’s False Covington Narrative?)

The account claimed to belong to a California teacher named Talia, but the profile picture matched that of a Brazilian model. It had an unusually high number of followers and tweets and posted an inconsistent type of political message, according to CNN’s report. Twitter’s rules and policies forbid users from creating “fake and misleading accounts.” 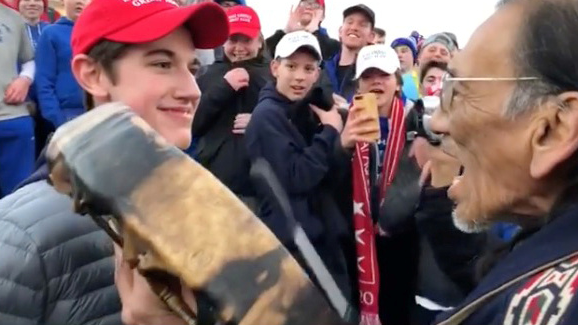 Democrats are worried the viral video might be a harbinger for things to come, especially as the party prepares for the 2020 presidential election.

There is disagreement about the degree with which the ads swayed opinion during that election. Most of the ads did not focus exclusively on then-Republican presidential nominee Donald Trump or then-Democratic presidential candidate Hillary Clinton, and the ad sales amounted to a mere $100,000. It was a paltry sum during a campaign where both sides spent tens of millions of dollars.

OPINION
1
Legendary College QB Apologizes After Saying Guns Should Be For 'Elite White People'
Editorial
2
Women Slammed For Removing Graffiti After DC Protests: ‘Not A Great Way To Use Your White Privilege’
US
3
'If Anybody Needs To Be Fact-Checked, It's The Media': Kayleigh McEnany Unloads On Jim Acosta
Media
4
Mass. AG: 'America Is Burning. But That's How Forests Grow'
Politics
5
'You've Gone Completely Mad': Interview Between Piers Morgan, Rudy Giuliani Goes Off The Rails
World