The number of Americans filing claims for unemployment benefits fell to the lowest it’s been in decades last week.

State unemployment benefit initial claims dropped to 199,000 for the week ending January 19 — the lowest number in more than 49 years, according to the Department of Labor. 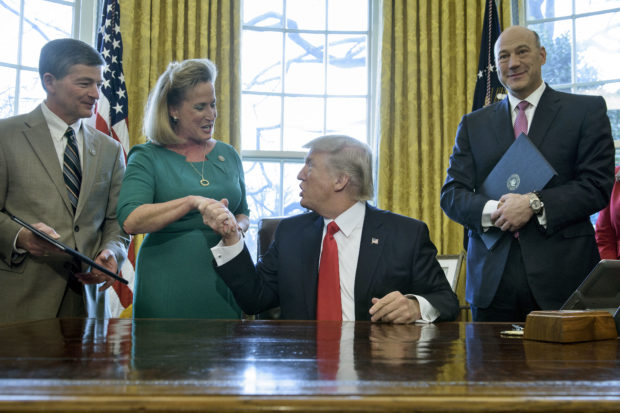 US President Donald Trump shakes the hand of Rep. Ann Wagner (R-MO) after signing a memorandum about Labor Department rules on investing in the Oval Office of the White House on February 3, 2017 in Washington, DC. / AFP / Brendan Smialowski / Getty Images

The seasonally adjusted initial claims recorded last week reflected a decrease of 13,000 from the previous week. This is the lowest number of claims since November 15, 1969, when 197,000 applications for unemployment benefit claims were documented.(RELATED: Trump Says He ‘Found The Magic Wand’ After Best Job Growth For U.S. Manufacturing Since 1997)

The overall number of weekly jobless claims has been on the decline since last February, a trend that speaks to the strength of the labor market with no sign of economic growth slowdown in sight despite the ongoing month-long government shutdown.

“The dollar was stronger against a basket of currencies. The partial shutdown of the Federal Government so far appears to be having a limited impact on the claims data,” according to Reuters.

The number of government employees who filed for jobless benefits increased from 14,965 to 25,419 by Jan. 12. Therefore, the decrease in weekly jobless claims “likely overstates the health of the labor market as claims for several states including California were estimated.” (RELATED: Trump Blasts Media For ‘Barely’ Covering ‘Great’ Economy, Low Unemployment)