“Over a speaker in the Rose Garden, a voice just announced, ‘Ladies and gentlemen, the program will begin in two minutes.’ Like we’re in a theater or something!”

“They terrorized my wife and dogs.”

—Roger Stone on Friday morning, after his arrest by the FBI at his Fort Lauderdale home. 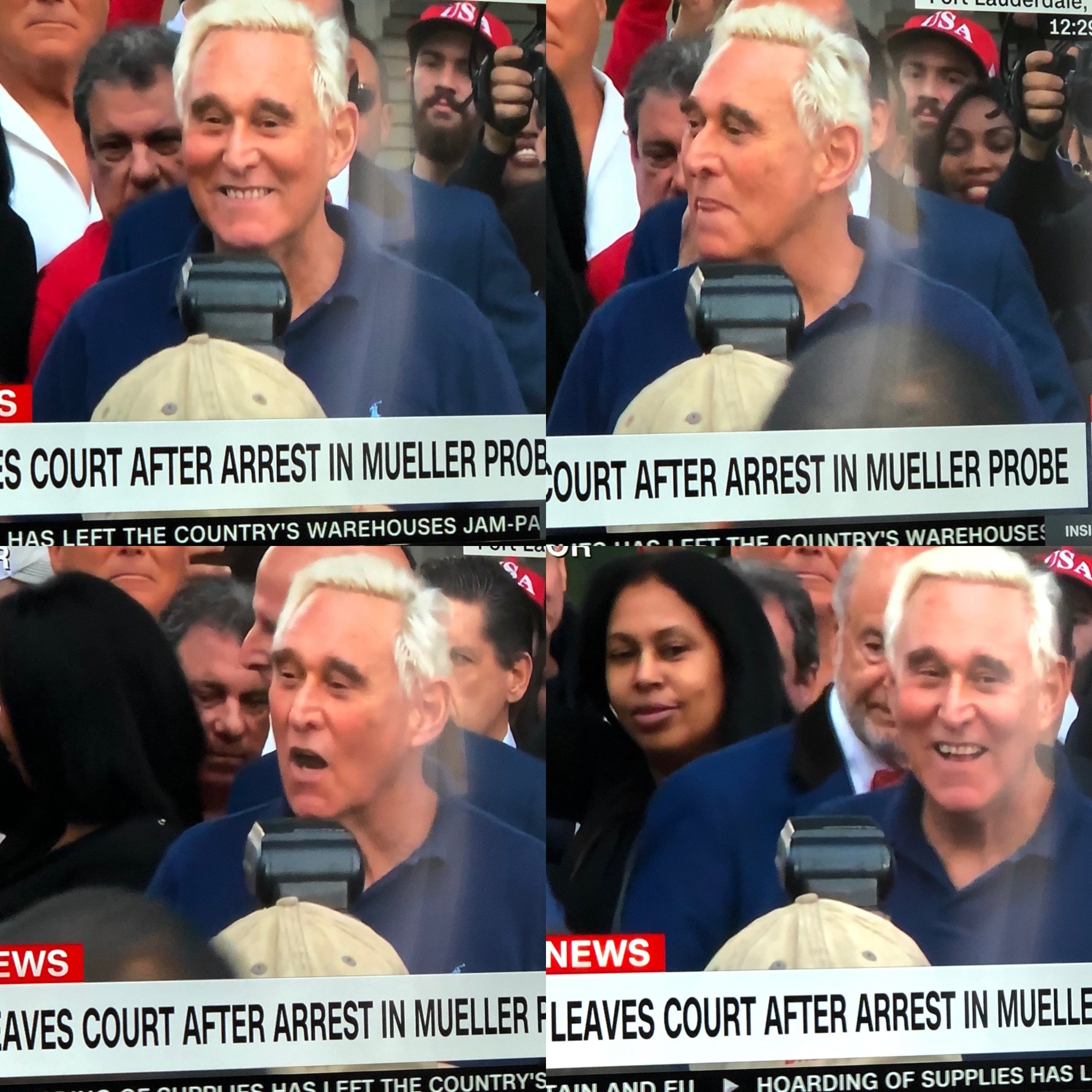 WHO TIPPED OFF CNN ON ROGER STONE’S CRACK OF DAWN ARREST?

“I live in Ft. Lauderdale and have been on the phone with reporters all morning. None. Not one, except for a remote CNN crew, knew about Roger Stone’s arrest. That’s not gut instinct. I’d bet my last dollar they were tipped off.” —John Cardillo, Newsmax.

CNN PR: “CNN’s ability to capture the arrest of Roger Stone was the result of determined reporting and interpreting clues revealed in the course of events. That’s called journalism.”

Some other thoughts on CNN report…

Kaitlan Collins, White House correspondent, CNN: “That would be @davidgshortell. He said on air that he got to Stone’s house early this morning after they noticed some unusual grand jury activity in Washington yesterday.”

Greta Van Susteren, formerly MSNBC, Fox News: “CNN cameras were at the raid of  Roger Stone…so FBI obviously tipped off CNN…even if you don’t like Stone, it is curious why Mueller’s office tipped off CNN instead of trying to quietly arrest Stone; quiet arrests are more likely to be safe to the FBI and the person arrested.”

Question of the Day: “Who gets Roger Stone’s suits?” —Justin Miller, national editor, The Daily Beast. (On a related note: Stone is widely known as The Daily Caller‘s fashion editor.)

This picture of Ben Affleck emerging from the dentist with his mouth stuffed with cotton is horrific. Here.

Splinter News‘s headline on Stone: “A Stone’s Throw From Jail.” In which they call him “ghoulish.” Here.

More on their tumultuous relationship here.

Live look at me waking-up this morning and reading the disgusting, deplorable, weirdo, Roger Stone, who got kicked-off Twitter for making racist and offensive remarks about @donlemon, @rolandsmartin and I, was arrested. pic.twitter.com/3Lsodd3N37

HuffPost lays off reporter who was working on tampon story

“While reporting today about federal workers who can’t afford tampons, I was laid off from HuffPost. If there’s anything I can say after 7 years, it’s that I will finish the story. (Also if you’re looking to hire a reporter to cover poverty and inequality, I’m available).” —Eleanor Goldberg, former business reporter, HuffPost.

He calls Jason Cherkis a “pain in the ass, in the best sense.”

“Newsrooms can be like families. You spend so much time with these people in stressful, joyful, fun and often dark moments. You build a trust and a connection and, over time, a social fabric forms that transcends work. …Which is why these layoffs are so difficult.”

“Professionally, yes, it’s incredibly hard to do more with less. But emotionally, your team, your family, your support structure, it’s just…. gone. …It’s been 1.5 years since I was at HuffPost. But I hurt for the folks there after the layoffs today. Good journalists didn’t just lose there jobs.”

“A social fabric is being torn and people are watching friends suffer without anything they can do about it. …I worked side by side with @jasoncherkis. We launched a podcast together. I saw him report, for months on end, stories that would save lives. I saw him get nominated for a Pulitzer. He’s a pain in the ass, in the best sense. And I love him dearly. Hire him.”