President Donald Trump last week reportedly criticized Paul Ryan for not funding a border wall while he was in charge of the House of Representatives.

A Washington Post report, which delved into the process behind President Trump’s decision to sign a continuing resolution to fund the government through February 15 absent any border wall money, quoted a Wednesday meeting attendee who said Trump accused the former House speaker of having “screwed him.”

At a meeting Wednesday with conservative groups, the president accused former House speaker Paul D. Ryan (R-Wis.) of having “screwed him” by not securing border wall money when Republicans had the majority, according to one attendee, Mark Krikorian, executive director of the Center for Immigration Studies. He said Ryan should have gotten him money before he left but he had no juice and had “gone fishing,” according to two attendees.

Ryan had warned the president against a shutdown and told him it would be politically disastrous, according to a person familiar with their conversations. 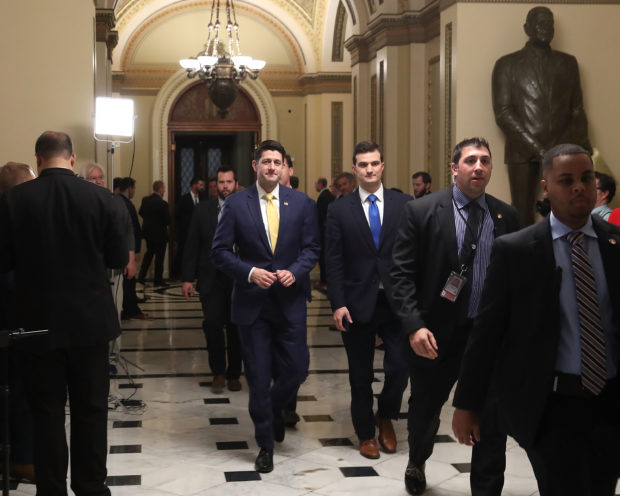 WASHINGTON, DC – DECEMBER 20: Speaker of the House Paul Ryan walks from the floor of the House of Representatives at the U.S. Capitol on December 20, 2018 in Washington, DC. (Photo by Mark Wilson/Getty Images)

Krikorian told the Post that Trump had promised on Wednesday that “there would be no caving” on the wall, a statement he said attendees agreed with. (RELATED: Louie Gohmert Reveals Paul Ryan Encouraged GOP Congressmen To Campaign Against Trump)

While many conservatives have criticized President Trump for agreeing to temporarily reopen the government, others, like Texas Rep. Dan Crenshaw, see the decision as a pragmatic one that could expose the Democrats as being unwilling to negotiate.