Former Trump campaign strategist Roger Stone claimed Monday that the ultimate goal of the Mueller investigation could be to charge President Donald Trump and Vice President Mike Pence with “some hoked up frame of Russian collusion” in order to gain the president of their choosing.

“That way they can make Nancy Pelosi president,” Stone said. “She can make Hillary Clinton vice president and then step aside.”

Appearing in a wide-ranging interview with Fox News host Sean Hannity on Monday night, the day before his official indictment, Stone claimed that the reason he’s being targeted is because “they want to silence” him and “criminalize free speech.”

“It’s extraordinary,” Stone told Hannity, comparing Democrats who have escaped inquiry with his situation. “Comey, Clapper, Brennan, McCabe, and Hillary themselves all lied. In their case, they lied about material, consequential things. To the extent that I made errors of memory in my four-and-a-half hours of voluntary testimony, they’re inconsequential.”

“But I’m targeted here because they want to silence me,” he continued, listing several reasons why he believed the Friday pre-dawn raid was unnecessary, including his age, lack of passport and the fact that he doesn’t own a weapon and is being “charged with non-violent process crimes.” (RELATED: Did The FBI Leak Roger Stone’s Arrest To CNN?)

“Are they putting the screws to you so you’ll sing or compose saying what they want so you don’t risk spending the rest of your life in prison?” Hannity asked. 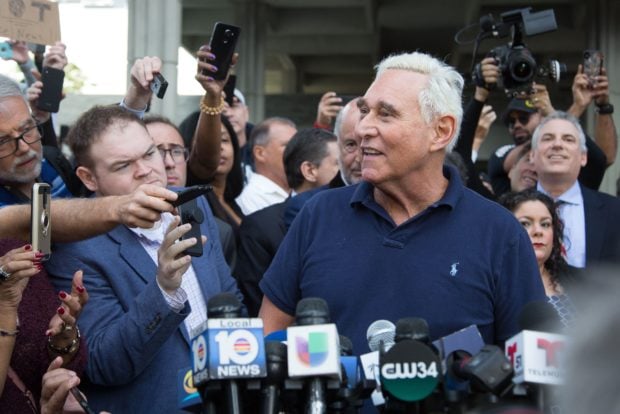 “I think to a great deal, this is meant to silence me,” Stone reiterated, adding that he has “great affection” for President Trump and his family. “I’m not going to testify against him because I possess no negative information. There is no Russian collusion. This is a witch hunt.”

Stone then speculated about the investigation’s ultimate goal:

They’re trying to criminalize legitimate political inquiry. They’re trying to criminalize free speech, which is really what this is about. Look, I honestly believe that they are going to try to charge the president and the vice president with some hoked up frame of Russian collusion. That way they can make Nancy Pelosi president. She can make Hillary Clinton vice president and then step aside. It’s a nightmare. But I think that’s what they have in mind. There is no Russian collusion. I have no collaboration with Wikileaks. I’m not charged with conspiracy. Believe me, if they could have made that case, they would have. But they want to silence me because I stand up for Donald Trump. That’s what this is really about.