Portnoy, who was famously kicked out of the Super Bowl Opening Night at Atlanta’s State Farm Arena on Monday night after security found out he was present without credentials, argued that NFL commissioner Roger Goodell would be better served publicity-wise by simply granting his well-known website press credentials.

“Yes, we are,” Portnoy told Fox News host Tucker Carlson, responding to a question about how the founder of a legitimate website could be charged with criminal trespassing. “But when you challenge authority and you challenge Roger Goodell, it generally ends up with a lecture, sometimes behind bars, sometimes with police officers. In this case we had 10 guys that looked like they work for the FBI with little NFL lapel pins thinking they were the toughest guys on the universe trying to rough me up.”

Portnoy speculated that Goodell’s animosity toward him and his website have to do with his support of New England Patriots quarterback Tom Brady, as well as the fact that he is “one of the few people” to challenge the NFL commissioner. 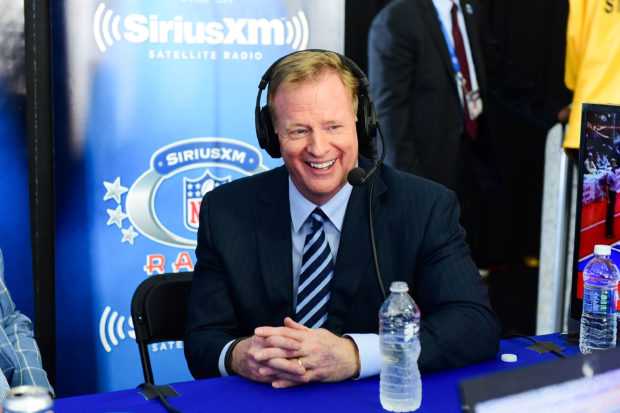 PHILADELPHIA, PA – APRIL 27: Commissioner of the National Football League, Roger Goodell visits SiriusXM NFL Radio during the first round of the 2017 NFL Draft at Philadelphia Museum of Art on April 27, 2017 in Philadelphia, Pennsylvania. (Photo by Lisa Lake/Getty Images for SiriusXM)

“How dumb is Roger Goodell?” Tucker asked. “If you’re going to arrest somebody, hassle somebody, you probably should not make that person the head of Barstool Sports. It’s not smart P.R., is it?”

“He is one of the dumbest humans who’s ever lived,” Portnoy responded. “He’s a rock. He has no brain. It’s like an old Atari game, just bouncing back and forth. There is no win for when you hassle us. There’s no win. If you put cuffs on us, we go to jail, it is a national media story.” (RELATED: Hotels.com Has A ‘Baby Making’ Promotion For The Super Bowl)

“But he is so stupid,” he added. “He is just the stupidest leader that we have ever encountered. It is really embarrassing.”

“So, Roger Goodell is a mouth-breather,” Tucker said. “You made a compelling case for that.”

The two ended the segment by discussing how much money Goodell makes and how he managed to land in his position.