Democratic Rep. Alexandria Ocasio-Cortez of New York has purchased dozens of Facebook ads soliciting funds for her re-election campaign following a report Tuesday that her House colleagues were looking to challenge her in the 2020 primary.

“We just got threatened with a serious primary challenge by other Democrats in the House,” Ocasio-Cortez wrote in a Facebook post sponsored by her campaign Wednesday. “I guess we always knew the political establishment would stand in our way. We just didn’t expect them to come after us so hard and fast.”

Facebook’s political ad library reveals the Ocasio-Cortez campaign purchased as many as 90 ads since The Hill reported Tuesday that an unnamed Democratic lawmaker urged members of the New York delegation to “find her a primary opponent and maker her a one-term congressperson.” (RELATED: Potential New York Dem Names Floated To Primary Ocasio-Cortez) 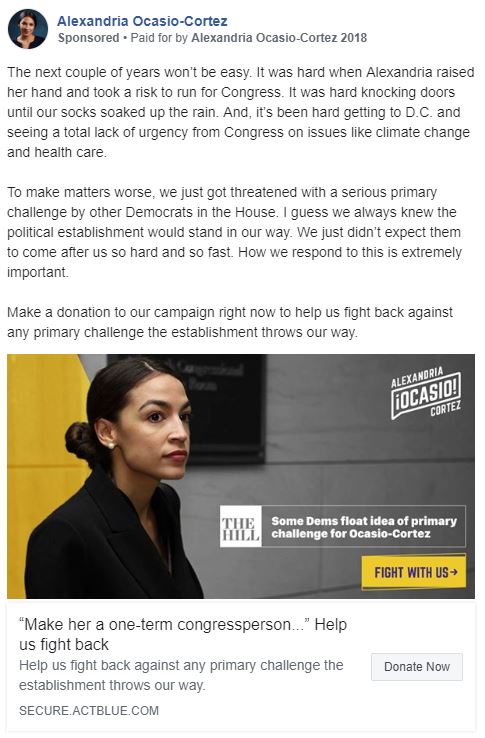 The first-term congresswoman’s Facebook fundraising push comes less than a month after her inauguration.

Ocasio-Cortez criticized the unnamed Democratic lawmaker quoted by The Hill for exhibiting a “broken mentality” in suggesting that many New York state lawmakers were chomping at the bit to make a run at her seat, which was previously held by former Rep. Joseph Crowley between 1999 and 2019.

“You’ve got councilpeople who’ve been waiting 20 yrs for that seat.”

That broken mentality, that public office is something you wait in line for, instead of earning through hard organizing, is exactly what voters want to change.

Shows you how disconnected some folks here are. https://t.co/TMWYkboB7i

Veteran New York Democratic consultant Hank Sheinkopf told The Daily Caller on Tuesday that three possible challengers to Ocasio-Cortez have been floating around Democratic circles in the state.

Ocasio-Cortez dismissed the report. “Whoever is paying this ‘Veteran NY Dem Strategist’ is getting totally fleeced,” she responded on Twitter.

Ocasio-Cortez’s recent flurry of activity on Facebook suggests the freshman congresswoman is taking the threat of a primary challenge seriously.

“We need to show how strong our campaign will be when they come after us in 2020,” Ocasio-Cortez wrote in a sponsored Facebook post Wednesday. “Make a donation right now to help us run a strong campaign in the next primary.”

The Ocasio-Cortez campaign said Tuesday they weren’t upset at the prospect of being primaried.

“We believe in primaries as an idea. We’re not upset by the idea of being primaried. We are not going to go out there being anti-primary — they are good for party,” Ocasio-Cortez campaign spokesperson Corbin Trent told The Hill.