Pope Francis hailed the United Arab Emirates, a majority-Muslim nation with a record of human rights violations, as a “model of coexistence” and freedom.

Francis made the comments in a video message to the people of the UAE ahead of his visit to the country, which will take place between Feb. 3 and 5.

The UAE is known for restricting free speech and assembly, sentencing criminals to flogging and stoning per Sharia law, and for the torture and forced disappearances of dissidents, activists and journalists, as well as negligence in addressing instances of sexual abuse against domestic workers. (RELATED: Francis To Become First Pope To Offer Mass On Arabian Peninsula)

The pontiff praised the country for striving to be a place where people can “find a secure place to work and live freely in respect for diversity.”

“I am happy that in a few days I will be able to visit your country, a land that strives to be a model of coexistence, human brotherhood and encounter among different civilizations and cultures where many find a secure place to work and live freely in respect for diversity,” the pope said, according to Catholic News Service.

Emirati authorities stand accused of pursuing and abducting activists and their supporting family members in 2014 for demanding a Democratic reforms process. The Arab Organization for Human Rights in the U.K. also produced a study in 2014 detailing several cases of reported abductions and the grisly methods of torture that Emirati authorities reportedly used on detainees, including severe beatings, ripping fingernails off and confinement inside a coffin for hours. 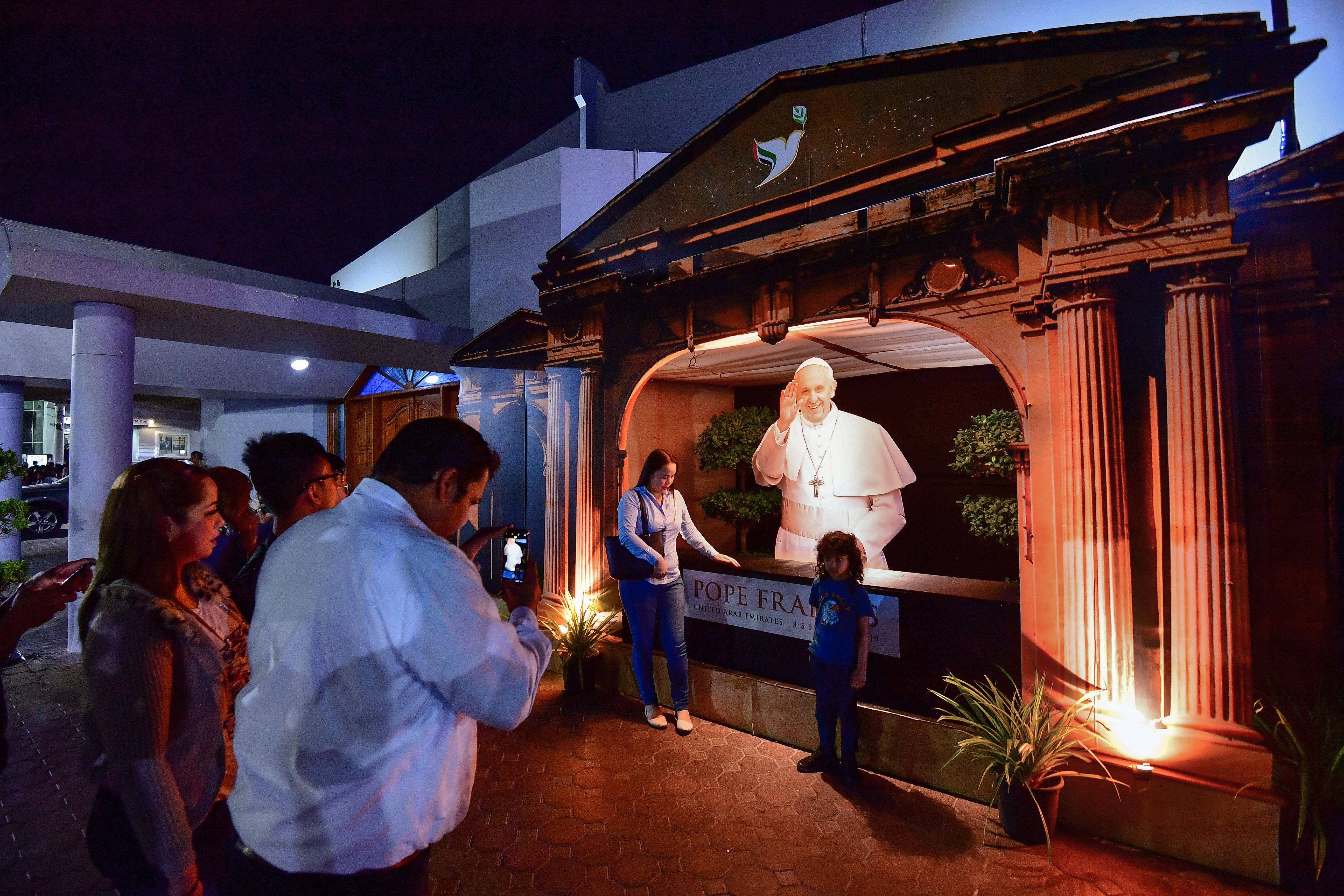 A boy poses for a photograph with a cutout image of Pope Francis taken by a man with a cell phone, days ahead of the papal visit to the United Arab Emirates, at St Mary’s Catholic Church in Dubai on January 30, 2019. (GIUSEPPE CACACE/AFP/Getty Images)

Other human rights violations reportedly committed by Emirati authorities include Sheikh Issa bin Zayed Al Nahyan’s videoed 2009 torture of a man, using electric shocks, planks with nails driven through them, whips, and running him over with a car, and the 2012 arrest and torture of three British citizens. Amnesty International also called for a war crimes probe in 2018 into UAE-run prisons in Yemen.

Francis will meet with Muslim religious leaders during his visit, including Sunni leader and Egyptian Sheik Ahmad el-Tayeb, grand imam of al-Azhar, in order to promote religious dialogue and peace between members of the different faiths. The pontiff thanked those willing to meet with him for their “courage and desire to affirm that faith in God unites and does not divide, draws together even in differences (and) moves away from hostility and aversion.”

Francis will also lead a public mass on Feb. 5 in Abu Dhabi — the first mass led by a pope on the Arabian peninsula in history.