In what will likely be a major disappointment for the Democratic Party’s progressive base, the upcoming Green New Deal legislation will omit the plan’s lauded goal: A specific deadline for ending U.S. fossil fuel development.

New York Democratic Rep. Alexandria Ocasio-Cortez and Massachusetts Democratic Sen. Ed Markey are expected to unveil their Green New Deal resolution later this week. However, their bill will not include a set date for complete oil and gas eradication, according to a Politico report.

Instead, the legislation will outline more ambiguous goals. A section of the text includes a call for achieving “net-zero greenhouse gas emissions for a fair and just transition for frontline communities and displaced workers,” and aims to eliminate the country’s carbon footprint by 2030 using unproven technology.

The bill also breaks with old tenets of the Green New Deal by touting “clean” energy instead of “renewable” energy, leaving the door open for other zero-carbon energy sources such as nuclear, which has experienced rapid decline in recent years.

The changes are reportedly meant to serve as a compromise between two major factions of the Democratic Party: The environmentalists who don’t like the fossil fuel industry and union workers who depend on fossil fuel-related jobs.

“It was an inclusive drafting process that included stakeholders from environmental, labor and more traditional environmental organizations,” said Julian NoiseCat, policy director with the environmentalist group 350.org. “I think that is itself pretty laudable.”

Critics of the Green New Deal pointed to the omission as proof of the necessity of oil and natural gas.

“Even the most hardened opponents of affordable energy now admit that slogans like ‘Keep It In the Ground’ and ‘ban fracking now’ are nothing more than fringe talking points. It’s easy to declare the end of fossil fuels, but actually crafting a plan to destroy the economy is both bad policy and bad politics,” said Texans for Natural Gas spokesman Steve Everley in a Monday statement. “We eagerly await the next walkback from supporters of the Green New Deal.” 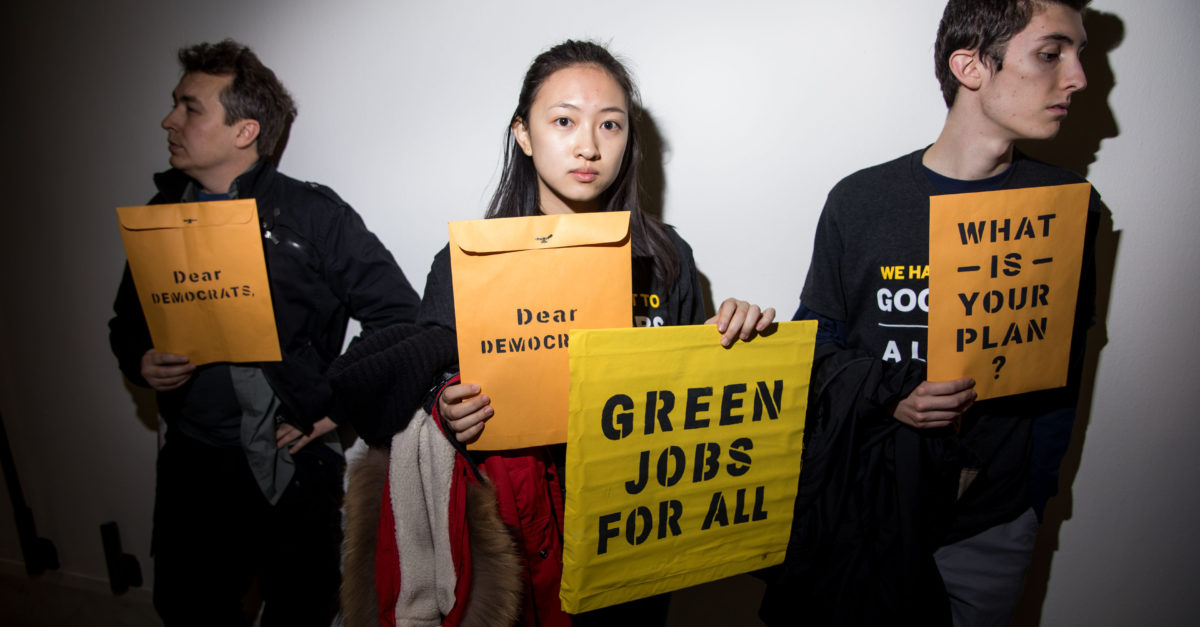 Student activists with the Sunrise Movement occupy Nancy Pelosi’s office to demand that she and the Democrats act on climate change. Shutterstock.

Ocasio-Cortez has established herself as the most high-profile supporter of the Green New Deal since winning her primary election. The proposal calls for a dramatic transition of the country’s grid to renewable sources such as wind and solar in just a few years time, and is estimated to cost upwards of $5 trillion.

Numerous Democratic presidential hopefuls have announced their support for the Green New Deal, albeit in vague terms. The elimination of a specific timetable to remove all fossil fuels will likely make it easier for more Democrats to get on board.

Nevertheless, other energy experts continue to question the practicality of the Deal’s goals.

“We may get there one day,” said Daniel Turner, the executive director of Power The Future, in a Thursday interview with Tucker Carlson that detailed the technological limitations that currently plague the renewable energy industry. “So when Representative Alexandria Ocasio-Cortez says we are going to power the entire country on renewables, there just isn’t the land to come up with the solar farm or the wind necessary to have these renewables.”