“Never Trump” conservative and The Weekly Standard co-founder Bill Kristol donated to Democrat Ralph Northam’s campaign during the 2017 Virginia gubernatorial election, but hasn’t indicated if he regrets that decision in light of Northam’s recent scandals.

Northam, who defeated Republican Ed Gillespie to take the governor’s seat, is now the subject of intense scrutiny over comments he made about late-term abortions and a racist photo that appeared in his medical school yearbook.

Last February in an interview with The New Yorker, Kristol explained that he and his wife donated to Northam’s campaign after being “infuriated” by President Donald Trump’s response to white nationalists marching in Charlottesville, Virginia. In a tweet in November 2017, Kristol was publicly questioning whether he should vote for the Democrat in order to stick it to the “Trumpy” campaign run by Gillespie.

Q: Vote for Gillespie who’d (mostly) strengthen non-Trumpy forces in GOP? Or for Northam as protest against Gillespie’s Trumpy campaign?

Kristol told The New Yorker that he was “pleased” when Northam won, adding, “I really could make a case that the country would be better off with the Democrats running the House, because, if the Republicans aren’t willing to check Trump, someone has to.”

Kristol has waxed poetic about Northam’s comments on a late-term abortion bill in the Virginia General Assembly and Northam’s racist yearbook photo, but has seemingly abdicated any responsibility for supporting the Democrat. Kristol has not yet indicated if he regrets supporting Northam’s campaign and did not return a request for comment. (RELATED: Gov. Northam: ‘I Don’t Have Any Regrets About Infanticide Comments)

“The party line vote on tabling HB 2491 in the subcommittee of the Virginia General Assembly is yet another reminder — an important one — of why many of us Republican #NeverTrumpers haven’t become Democrats but rather are doing our best to save the GOP,” Kristol said referencing the late-term abortion bill, not mentioning his Northam donation.

The party line vote on tabling HB 2491 in the subcommittee of the Virginia General Assembly is yet another reminder–an important one–of why many of us Republican #NeverTrumpers haven’t become Democrats but rather are doing our best to save the GOP.

Kristol retweeted a comment from Hayden Black mocking Northam’s excuse for the blackface/KKK photo in his medical school yearbook, but largely avoided directly criticizing the governor. For example, when former UN Ambassador Nikki Haley said that Virginians “deserve better representation,” Kristol spun the remark against Trump, writing, “So do the people of the United States.” 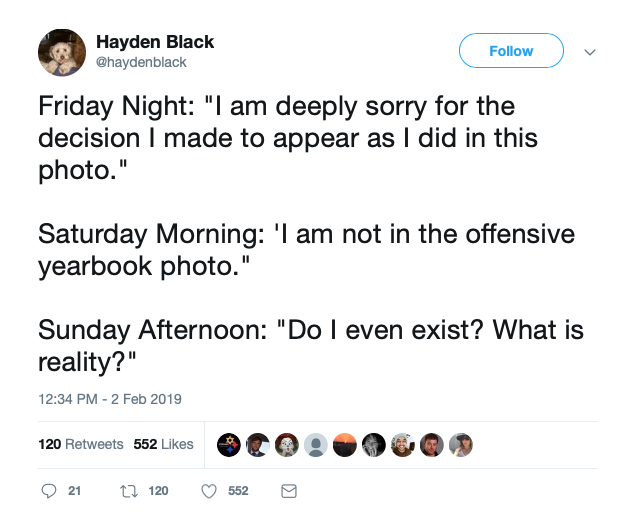 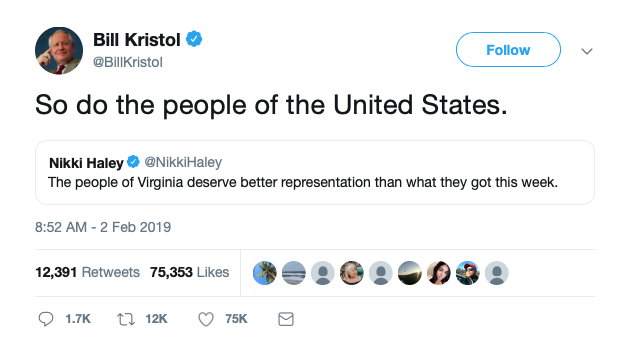 In another set of tweets about the yearbook photo, Kristol joked about yearbooks gaining ground in American politics — likely a reference to failed Alabama Senate candidate Roy Moore — and blasted the Republican Party’s ability to conduct and use opposition research.

Kristol has repeatedly toed the line on supporting Democrats in his attempt to turn the Republican Party away from Trump. Prior to the 2018 midterms, Kristol floated the idea that if Democrats swept the elections then Republicans would finally have an incentive to turn against the president.

“Can’t do anything about the fact that he’s president. So maybe you have to work with him. That’s been the general Republican attitude,” Kristol said during an MSNBC interview. “I think the day after election day, things change more than people realize in terms of Republican psychology and dynamics.”

“They’ll need a little help from people like me,” Kristol added with a laugh.

“Bill Kristol must have missed the class on party building where you are taught not to actively help your opponent while trying to rebuild your own party,” a GOP strategist told The Daily Caller.