Pope Francis acknowledged Tuesday for the first time that Bishops and priests had sexually abused nuns, in some cases using them as sex slaves.

Francis confirmed to reporters that certain orders of nuns have and in some cases still do suffer sexual abuse at the hands of male clergy, noting that his predecessor Pope Benedict XVI dissolved an entire order of nuns because male clerics subjected them to sexual slavery. The pontiff’s admission marked the first time that the Catholic Church has openly acknowledged the veracity of claims of sexual abuse against nuns. (RELATED: Indian Nuns Detail Systematic Abuse From Priests)

“It’s not that everyone does this, but there have been priests and bishops who have,” Francis said, according to The Associated Press. “And I think that it’s continuing because it’s not like once you realize it that it stops. It continues. And for some time we’ve been working on it.”

“Should we do something more? Yes. Is there the will? Yes. But it’s a path that we have already begun,” he added.

Francis’ acknowledgement of the abuse of nuns adds a new facet to the church’s struggle with its global sex abuse crisis. The admission also comes in the wake of the International Union of Superiors General’s November 2018 denouncement of the church’s “culture of silence” concerning abused nuns. The women’s magazine of the Vatican newspaper L’Osservatore also noted in January 2019 that cultural view of clergy as untouchable or all-powerful perpetuated the issue of abuse. 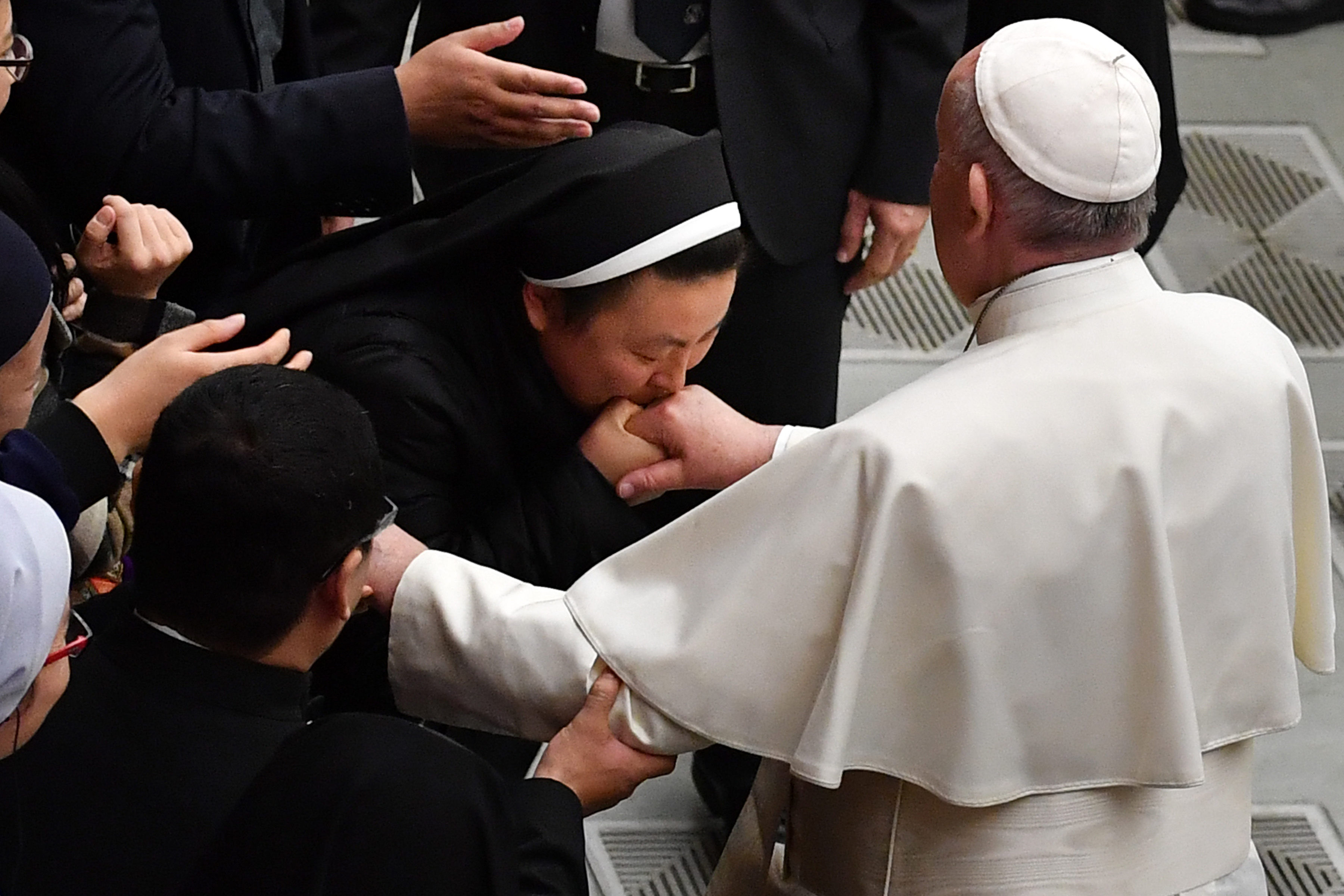 An Asian nun kisses Pope Francis’ hand during the weekly general audience on February 6, 2019 at Paul-VI hall in the Vatican. (ANDREAS SOLARO/AFP/Getty Images)

The ongoing abuse of nuns has also led to other tragedies, namely nuns aborting babies conceived with predatory priests and nuns raising children whom the priests fathered, but will not acknowledge, according to Women Church World.

Studies and investigative reports dating back to the 1990s revealed that nuns have suffered sexual abuse at the hands of male clergy in Africa, Asia, Europe, and South America, with African clergy in particular targeting nuns in order to avoid HIV transmission from prostitutes.

Francis, however, asserted that the Catholic church has been taking measures to combat the abuse of nuns for years.

“It’s a path that we’ve been on. Pope Benedict had the courage to dissolve a female congregation which was at a certain level, because this slavery of women had entered it — slavery, even to the point of sexual slavery — on the part of clerics or the founder,” Francis said according to MSN News.

A spokesman confirmed that the order to which Francis referred was the Community of St. Jean in France.

“There are cases, usually in new congregations and in some regions more than others. We’re working on it,” Francis said of ongoing cases of abuse of nuns.

One of the most recent cases to gain the media’s spotlight was that of a nun in India, who accused a bishop of repeatedly raping her. The bishop, Franco Mulakkal, was subsequently arrested and faces prosecution. The case caused a firestorm of protests on behalf of the nun and her fellow sisters, as well as backlash against the nun from within the church, underscoring the risks nuns face in reporting any abuse they suffer.

As for the church’s efforts to route out abuse, Francis urged the faithful to pray that the church is successful in doing so.

“Pray that this goes forward,” Francis said. “I want it to go forward.”